A Basket Case? The Future of the Renminbi Exchange Rate Regime: Part 2

Things have been moving fast on the Chinese currency regime since August. The ultimate goal is clear: to eventually move to a market-based currency. But how to get there? Moving the link from the US dollar to a new basket and widening intervention bands would put the renminbi on the path to a more flexible exchange rate regime, which would be in the interests of both China and the international monetary system. This second part of a two-part blog looks at the Chinese actions over the last year that have created this opportunity. Part 1 analyzed the immediate actions required.

With the renminbi slated to enter the IMF’s Special Drawing Rights (SDR) basket next year, the future of China’s exchange rate arrangements has taken on a new importance. Before August, the exchange rate regime seemed clear—China would continue with its link to the dollar, which had been in place for many years. Things became murkier on August 11, however, when the People’s Bank of China announced a technical but highly important step to making the exchange rate system more market based. The change was to the way that the central rate for the renminbi in the onshore market is calculated. Under China’s fixed exchange rate system, fluctuations of up to 2 percent on either side of this rate against the US dollar are allowed during the day.

Prior to August 11 the central rate was set at the discretion of the authorities and was effectively on a dollar peg. Figure 1 shows daily data on renminbi exchange rates against the dollar, the euro, the yen, and the Korean won over the last year, measured such that an upward movement implies an appreciation. As can be seen, the fluctuations against the dollar in both the short and long runs were much smaller than any other currency. 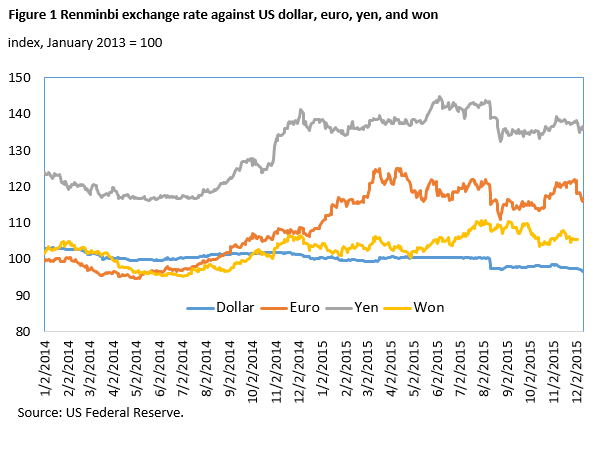 Under the new system announced on August 11, the central rate was set based on the exchange rate in the onshore market at the close of the previous day. By making the morning fix dependent on market prices on the previous day, the new system sent a clear signal that the authorities were interested in moving to a more market-based exchange rate system. This move was in line with the general view both within China and in the rest of the world that the Chinese currency system should gradually become more flexible and market-determined.

The August 11 announcement led to significant speculation that the renminbi would depreciate against the dollar. The combination of dollar’s strength over the previous year and the band set in terms of the dollar substantially reduced renminbi competitiveness. For example, by August 10, 2015—the eve of the exchange rate announcement—the renminbi had appreciated by over 10 percent over the last year in SDR terms and significantly more than that in terms of the newly announced China Foreign Exchange Trade System (CFETS) basket discussed below (figure 2). Indeed, expectations of renminbi depreciation against the dollar appeared to be confirmed when the renminbi was allowed to depreciate by 2 percent—the maximum permitted—on the first day and then again on the second day after the change in regime. 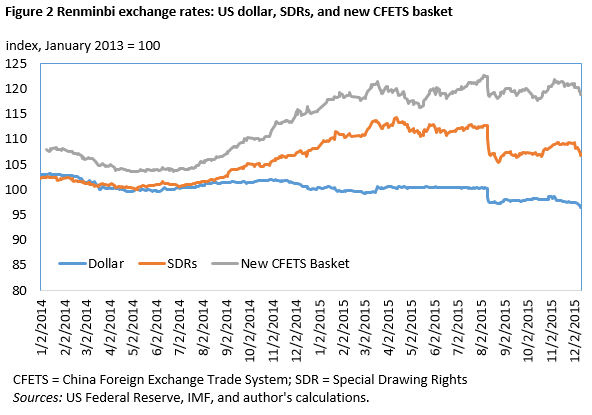 This led to selling of the renminbi in both onshore and offshore markets driven by currency traders and by corporations. The former saw the possibility to sell renminbi now and buy them cheaper in the future. The selling by Chinese corporations that had borrowed in dollars reflected the realization of the need to hedge the risk that the local cost of such borrowing would rise as the renminbi depreciated against the dollar. Such unhedged borrowing reflects one of the disadvantages of fixing against a single currency—it increases the incentives for such borrowing in that currency if (as is currently the case) borrowing costs in dollars are lower than in renminbi.

With risks that the size of outflows from the renminbi could increase rapidly, the Chinese authorities chose to stabilize the onshore rate using intervention. Over the next few days the renminbi depreciated against the dollar for most of the day in the onshore market, but then rapidly appreciated near the end of the day to end up basically where it started. It was clear to traders that the authorities were intervening to bring the rate back in line. Furthermore, faced with such speculation the authorities also increased the reserve requirements for onshore trading, making the market less liquid and reducing the scale of the intervention needed to keep the renminbi relatively fixed against the dollar.

In addition, the new more flexible system created another issue for the Chinese exchange rate system, namely an increase in the gap between the onshore and offshore renminbi rates (figure 3). This deviation reflects expectations about future exchange rate moves combined with the continuing effects of Chinese capital controls, that allow a wedge between the exchange rate in the two markets. The more depreciated rate (i.e., higher value) in the offshore market reflects traders’ beliefs that the renminbi will depreciate against the dollar in the future and that such a position is easier to take in the offshore market than in the onshore one. It is a clear indication of tensions within the current exchange rate system. 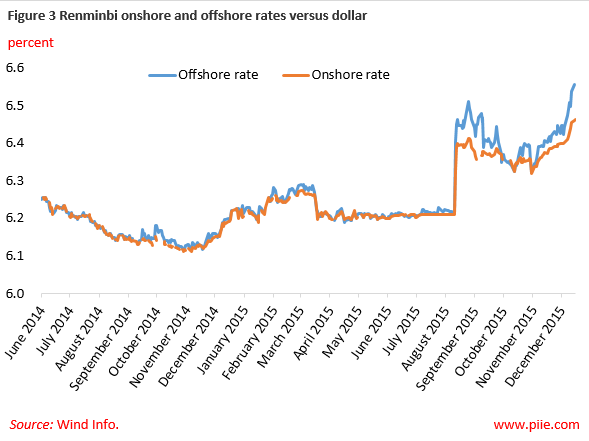 In short, despite the initial intention to move to a more market-orientated system, the final result appeared to be a more cumbersome version of the old fixed rate system involving a morning fix based on the market rate of the previous day, itself determined by intervention in the on-shore market that was now less liquid and a wider onshore-offshore differential. While stable, such a system is also prone to underlying instability if market expectations change rapidly.

A Good Time for a New Regime

It is an increasingly odd feature of the international financial system that the currency of the world’s second largest national economy is effectively fixed against the dollar, the currency of the world’s largest economy. It leaves the competitive position of the highly eternally orientated Chinese economy at the whim of movements in the dollar, itself based largely on views on the relative performance of the United States economy against its other major competitors. The difficulty, however, has always been how to move off the dollar link while avoiding financial disruption.

The recent appreciation of the dollar against other major currencies has moved the renminbi broadly into line with fundaments, making this a good time to switch to a new regime. Calculating “appropriate” exchange rate values has always been a tricky business, especially for an economy that is growing and changing as fast as the Chinese economy. With all of that said, most analysis suggests that the Chinese currency is currently relatively close to the value that would be implied by fundamentals. For example, in November William Cline’s latest semiannual estimate of fundamental equilibrium exchange rates finds that the “Chinese renminbi remains consistent with its fundamental equilibrium exchange rate (FEER), despite depreciating modestly against the US dollar in August as China moved toward greater market determination of the rate.” Similarly, the IMF’s annual External Sector Report published in July reported that the recent appreciation has brought the renminbi to a level where it was “no longer undervalued,” although the rising trade surplus “suggests that the external position probably remains moderately stronger than warranted.”

The key question, however, remains how to get from a dollar-oriented band to a more flexible and market-oriented system. Publishing the exchange rate against a set of baskets is one step along the way of moving to a new regime, but a relatively small step. What is needed is a more decisive break with the past.

Switching the Peg and Widening the Band

To truly move toward a more flexible currency requires some bolder moves comprising two main components. The first involves announcing that intervention bands will from now on be calculated against a basket of currencies whose weights are known. This is needed to convince traders that the band has truly moved from the dollar to a currency basket. The second is to significantly increase the bands for intervention within the day, say from the current 2 to 4 percent to make clear that the peg is in the process of being loosened.

Two issues remain to be decided before such as policy can be announced. The first is which currency basket to use. One option would be to use the SDR basket or the Bank for International Settlements (BIS) effective exchange rate index, but the publication of the new trade-weighted series by the CFETS seems to imply this is now unlikely. The SDR has too low a weight on the currencies of other Asian currencies while the BIS effective exchange rate puts too little weight on the major currencies that enter the SDR basket.

The second issue to be decided is the size of the trading bands. Any band is somewhat arbitrary, and certainly the proposed increase from 2 to 4 percent is not a scientific calculation. The important point here is that the intervention bands be widened as a clear commitment to move ahead over time with a freer exchange rate system.

Making the bold move of linking to the new basket published by the CFETS with a wider intervention band provides the potential for a smooth switch from the current system to one where one-way bets are less obvious, incentives to overborrow in dollars are curtailed, and renminbi markets are encouraged. It would put the renminbi on track to becoming a major currency and the international monetary system on the right track moving forward.

Author's note: The views expressed here do not necessarily represent the views of any organizations with which I am affiliated.

The new SDR allocation will benefit all countries