Deleveraging the State in China

Corporate leverage has grown rapidly in recent years in the state sector. If the government remains committed to its policy of moderating the growth of credit, as economic growth slows, this could lead to the partial privatization of state assets.

Corporate deleveraging is not without precedent in China. In the 1990s China’s industrial sector was highly leveraged, with liabilities double the book value of firms in 1995. Most of these liabilities were generated by state-owned enterprises which at that time dominated output in the industrial sector. Eventually leverage declined thanks to restructuring and downsizing of the state sector.

Today leverage is a growing concern in China. A broad measure of the ratio of credit to GDP extended to households and corporations shows an increase from 117 percent in 2008 to 180 percent in 2013.  This rapid build-up is a risk to the financial system. As economic growth continues to slow, profits will shrink and as a result highly leveraged corporations will face growing solvency risks.

Debt-to-Equity Ratio of Industrial Enterprises by Ownership vs State-Controlled Enterprises across Sectors, 1993 - 2013 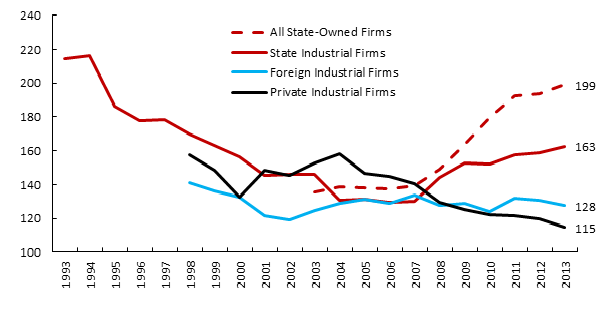 State-owned enterprises also face the greatest risk of insolvency. Although state-owned enterprises today only account for half of outstanding corporate loans, these loans are less sustainable than loans to private enterprises. The return-on-assets of state firms are one-third that of private firms and one-half that of foreign enterprises. More importantly, as China continues the process of reforming the financial sector and eventually removes deposit interest rate controls, the resulting higher lending rates will likely put additional pressure on less profitable firms. The returns of state owned assets are already only about half the weighted average bank lending rate of 7.33 percent in the third quarter of 2014. A further increase in lending rates will increase the risk of default in the state sector further.

China appears to be in the beginning stages of addressing the risks in China’s over-leveraged state sector by partial privatization of underperforming SOEs. The idea of a mixed ownership, newly championed as a lynchpin of state-owned enterprise reforms under the current Xi and Li administration, is promoting mixed ownership reforms (混合所有制企业), which consists of selling more shares of state-owned enterprises to private investors. Last year the government announced several high profile “experiments” as a part of these mixed ownership reforms. Further, local governments are also experimenting with the sale of infrastructure assets in an effort to delever local government financing vehicles. For example, China is launching public-private partnership (PPP) projects to allow private investors to operate and jointly own local infrastructure projects like heating supply, sewer systems, garbage disposal, pipe networks, and medical care. Premier Li Keqiang explicitly called for adopting the PPP model during his speech at the World Economic Forum in Davos this January.

Even partial privatization of state assets will be a challenge. The most valuable state assets are concentrated in sub-sectors of strategic interest to the state - such as oil and gas, rail, electricity, and post and telecom – making significant privatization less likely. Other valuable sectors like real estate, construction, and metals may be less likely to realize their book value in sales to private investors due to underlying weakness in growth. Moreover, the payoffs for PPP projects are unclear. If the prices of assets are too high or local controls on tariffs limit the earnings potential of projects, private investors might avoid buying these assets.

Book Value of State-Owned Enterprises by Sector and Sub-Sector, 2012

This makes it more likely that China would concentrate mixed ownership reforms in consumer-facing or non-strategic sectors. For example, social services (e.g. business consulting, leasing, and entertainment) is of less strategic interest and has stronger growth prospects making it an optimal area for more rapid downsizing of state control. So too consumer facing sub-sectors such as wholesale, retail, and restaurants and financial services. Full state divestiture in these sectors alone would generate RMB 14 trillion in revenue, enough to half the outstanding corporate debt of state-owned enterprises.

China must address the rapid build-up in leverage in the state sector. Partial privatization of state assets – while painful for leaders that several years ago promoted state firms as national champions and a step too short for some hoping for complete privatization – is still a step forward in reducing financial risks and improving growth moving forward.

Injecting a Little Risk into the Chinese Financial System