At a time when openness to trade has become too toxic for most world leaders to swallow, President Xi Jinping recently repeated a plea for China to welcome more imports. Speaking at the second China International Import Expo (CIIE), hosted in Shanghai November 5–10, Xi not only called for China to import more, he extolled the World Trade Organization (WTO) and likened globalization to a mighty river, unstoppable despite many shoals.

Depressingly, the massive Expo event, featuring 3,000 companies worldwide, including 192 US firms,[1] was boycotted by US officials and barely noticed in the American press.[2] But this writer was there as President Xi appeared, along with President Emmanuel Macron of France, Foreign Minister Luigi Di Maio of Italy, and leaders of several smaller countries, including Greece, Serbia, Jamaica, Croatia, Bulgaria, Azerbaijan, and Lithuania. They embraced Xi’s “opening up” and multilateral themes.

American skeptics will scoff at Xi’s speech, but they should ask what other leader of a major economic power is calling for enhanced imports. Not President Donald Trump. Not Chancellor Angela Merkel of Germany. Not Prime Minister Shinzo Abe of Japan.

This is regrettable at a time when, as WTO director general Roberto Azevedo observed, both goods and services trade are barely growing and, as UNCTAD secretary-general Mukhisa Kituyi lamented, annual global foreign direct investment flows have fallen year after year for a decade.[3]

In his speech, Xi recited the liberalization commitments made at the 2018 CIIE that have since been fulfilled—an extended area for the Shanghai Free Trade Zone and six pilot free trade zones in other provinces; a Science and Technology Innovation board on the Shanghai Stock Exchange; a new foreign investment law to take effect January 1, 2020, with an emphasis on pre-establishment rights and national treatment; and a number of smaller initiatives. The fresh commitments Xi announced at the 2019 CIIE include:

Do the numbers back China's claims?

Those who join Trump trade guru Peter Navarro in viewing China as an existential threat to the United States will dismiss the CIIE as a propaganda show and Xi’s speech as empty rhetoric.[6] But even observers less eager for a new cold war will take a “show me” attitude to Xi’s renewed import proclamation.

Ideally, China’s progress would be measured by changes in ad valorem equivalent tariff rates for a wide range of goods, services, and inward investment flows. A previous post calculates that average Chinese tariffs on merchandise imports from the rest of the world (excluding imports from the United States) have fallen from 8 percent in January 2018 to 6.7 percent in June 2019. Parallel statistics are not available for Chinese imports of services or inward investment flows. But other metrics may indicate the direction of change.

Meanwhile, for most quarters since 2017Q1, China’s current account surplus has been relatively modest, bouncing between $20 billion and $70 billion. This metric reflects China’s internal balance between savings and investment, and its real exchange rate, rather than any import push. But it can be said that China’s current macroeconomic policies are not fostering huge external surpluses. 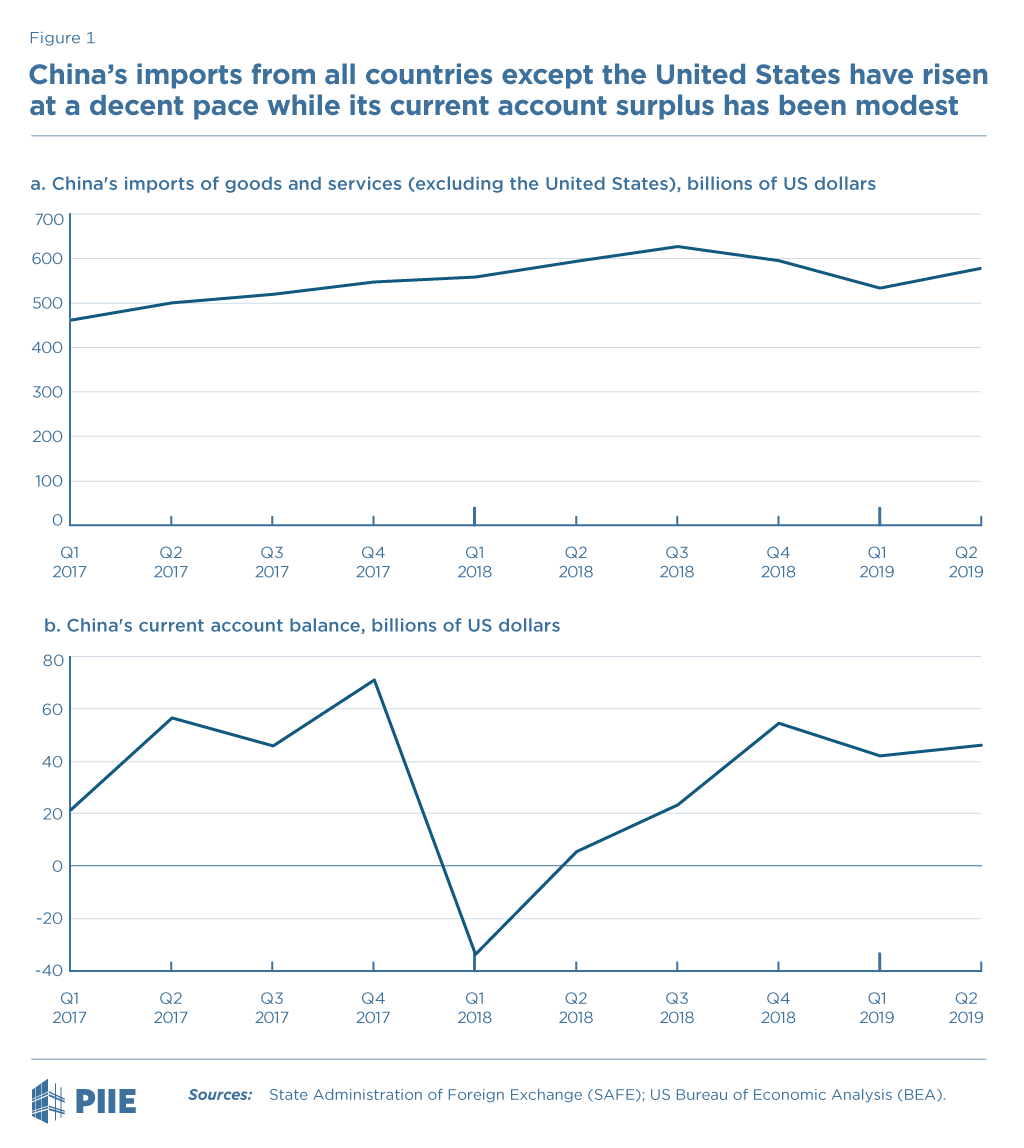 China’s bilateral merchandise imports from the United States dropped significantly after 2018Q2, when the first batch of punitive tariffs covering $50 billion US goods took effect in July 2018 (figure 2). While the US bilateral trade deficit has fluctuated since Trump launched the trade war, it shows no sign of a permanent decrease—in other words, during the tariff war, US exports to China have dropped alongside US imports from China.

From a political standpoint, once the United States imposed punitive tariffs, China had no choice but to respond. From an economic standpoint, however, China would have been better off not responding at all. By refraining from tit-for-tat tariffs, Beijing could have convincingly demonstrated the will to “open up.” Yet it must be observed that China’s tariff retaliation has been far less that 1-for-1 in terms of trade volumes.[7] 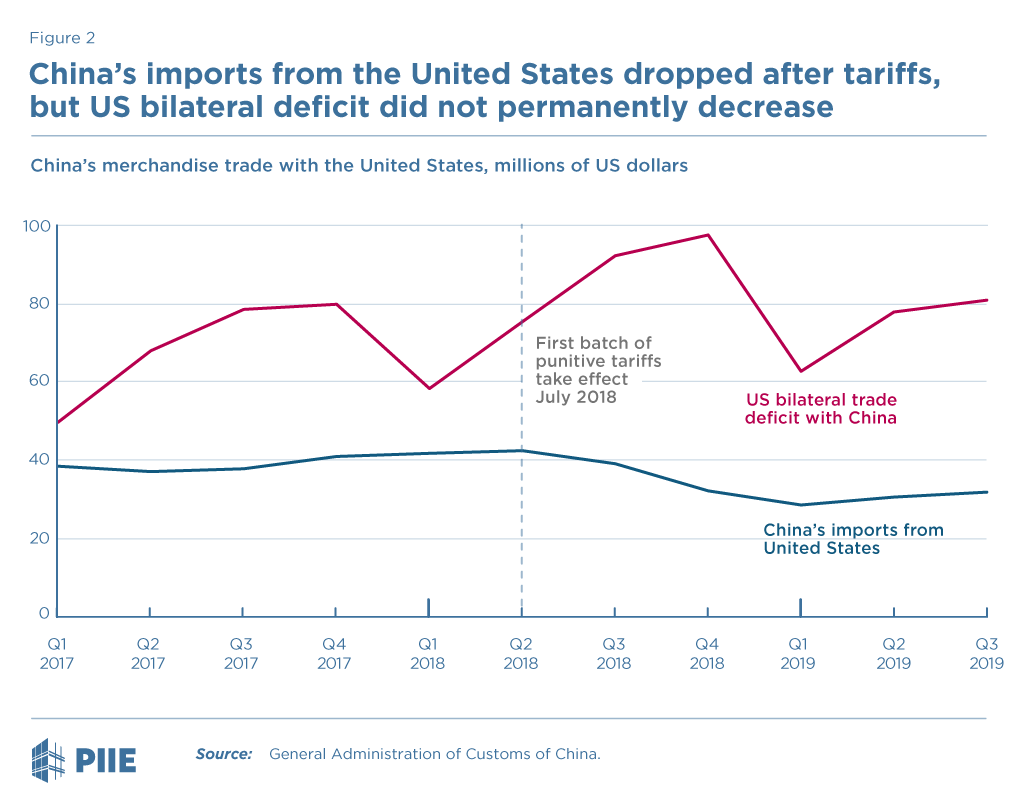 China’s inward foreign direct investment flows scarcely suggest a surge in response to the “opening up” campaign, but they are probably trending down as collateral damage from the China-US trade war (figure 3). Outward flows fluctuate but show no trend.[8] 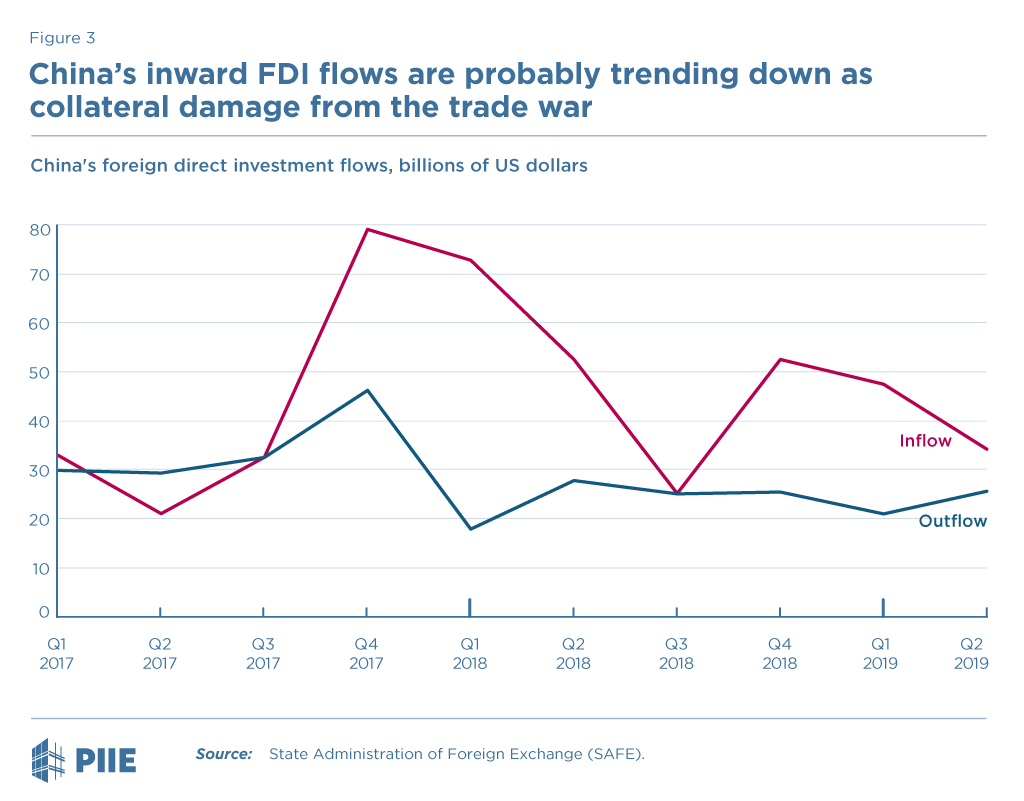 Xi's aspirations on free trade are ahead of other world leaders, but meaningful progress is still a work in progress

On balance, the “show me” school of China observers will regard the cut in Chinese tariffs on imports from the rest of world as modest. Nor will they be persuaded by trends suggested in the figures in this blog post. In addition, genuine IPR protection remains to be demonstrated by stronger enforcement efforts. Meanwhile, little progress has been made on “competitive neutrality” between state-owned enterprises and private firms (whether domestic or foreign), despite earlier calls by Premier Li Keqiang and Governor Yi Gang of the People’s Bank of China.[9]

A fair conclusion is that President Xi’s rhetoric and aspirations are in the right place—and well ahead of other world leaders. But meaningful import liberalization and “opening up” are works in progress, with limited results as 2019 draws to a close. Skeptics should not scoff, but neither should Beijing declare “mission accomplished.”

2. Even the Wall Street Journal’s coverage in the November 6, 2019, print edition was relegated to page A9.

3. According to the WTO, in 2019, world merchandise trade volume is projected to grow just 1.2 percent, and world services trade not much more. According to UNCTAC, world FDI flows reached just $1.3 trillion in 2018, down from the record-level of $1.8 trillion in 2007.

4. New infrastructure that promotes connectivity within each region will likely be the heart of the regional integration plans.

5. Echoing Trump’s withdrawal from the Trans-Pacific Partnership on the eve of its ratification, Prime Minister Narendra Modi withdrew India from RCEP at the altar.

6. Adherents to Navarro’s view include, among others, Michael Lind (“The Return of Geo-Economics,” The National Interest, Nov/Dec 2019) and Gordon Chang (“The Great Confrontation with China,” Wall Street Journal, November 8, 2019, p. A15).

8. The 2018 and 2019 CIIE events had no particular bearing on Chinese outward direct investment.

9. At the G-30 International Banking Seminar in October 2018, Governor Yi said for the first time that China will consider applying the competitive neutrality principle to support reform of state-owned enterprises. In his March 2019 Government Work Report, when vowing for better business environment for the private sector in the coming year, Premier Li mentioned competitive neutrality again and said: “We will follow the principle of competitive neutrality, so that when it comes to access to factors of production, market access and licenses, business operations, government procurement, public biddings, and so on, enterprises under all forms of ownership will be treated on an equal footing.”

The missing chips: How to protect the semiconductor supply chain