Which countries are most exposed to China?

The recent drop in China’s stock prices has rekindled interest in the economic impact of a possible slowdown in China’s economic growth. China is now the second largest importer worldwide (closely following the United States), international trade is an important channel through which the Chinese economy can sway growth elsewhere. To gauge which countries would be most affected through direct trade linkages, the table below reports exports to China as a share of total exports for major advanced and emerging economies. The sample consists of the members of the G-20. The data refer to merchandise exports and are drawn from the International Monetary Fund’s Direction of Trade Statistics.

Among the G-20 countries, regional neighbors had some of the largest ratios of exports to China in total exports (Australia, Korea, Japan). Commodity exporters also featured prominently (Brazil, Saudi Arabia). Except for India and Argentina, the trade exposure to China has increased in all G-20 economies since 2007. Beyond the G-20, several neighbors had very large shares (Mongolia had 90 percent in 2013; North Korea and Turkmenistan about 70 percent). Several commodity exporters also had substantial shares, ranging between 45-70 percent for a few African economies including Angola, Republic of Congo, Gambia, and Mauritania. As a slowdown in China would reduce demand for commodities, an additional trade-related channel for commodity producers would occur through lower prices.

Table 1 Exports from G-20 member state to Mainland China, as a share of the country's total exports (in percent) 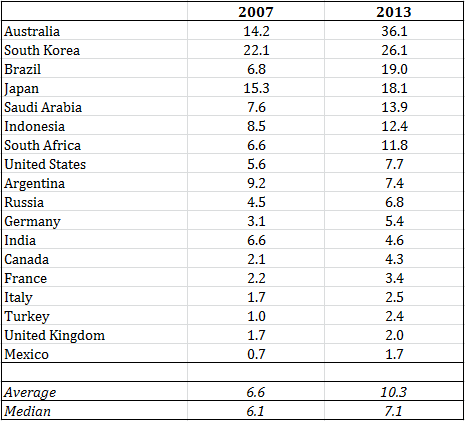 Source: International Monetary Fund,  Direction of Trade Statistics Notes: The average is unweighted across countries. Data for South Africa refer to 2012 instead of 2013.

Data in this table refer to 2013 for all countries. Quality varies and many observations, especially for low-income countries, are still preliminary.

Hi: Good table. I do not see Taiwan? Cheers.

It is not included in the original data source.

Is the sky really falling for private firms in China?