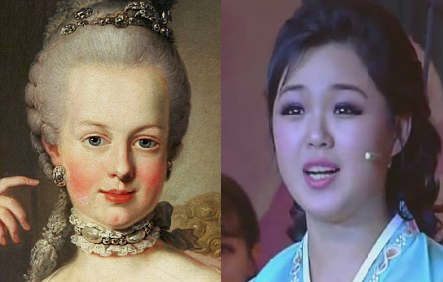 For the last year or two I have been beating the “what goes up, can come down” drum with respect to the growth of North Korean exports. The increase in exports observed until recently was partly due to the rise of global commodity prices. This favorable terms of trade effect was subject to reversal, and the North was vulnerable to a downturn in commodity prices, particularly if that downturn was driven by a slowdown in China which accounts for more than 80 percent of the country’s trade. Indeed, I have argued that after a period of growing prosperity, particularly for the apparatchik class, the single biggest threat to political stability would be a diminution in export revenues which would leave a regime bereft of conventional tools of macroeconomic stabilization up the creek without a paddle (sorry to mix metaphors but I was out really late last night). In such circumstances, the investments in ski slopes and water parks might leave Kim Jong-un and Ri Sol-ju looking a bit like Louis XVI and Marie Antoinette.

The Korean Development Institute  recently released a report (in Korean, and possibly subject to shifting locations on their website but the hyperlink is good at the moment) which breaks down DPRK-China trade into value, volume and price components. The bottom line is that the Chinese slowdown is evident in the data. The chickens are coming home to roost.

The KDI data show that relative to 2014 bilateral trade has diminished, with imports actually contracting more rapidly than exports. The decline in imports could reflect similar commodity price shifts—a decline in oil or grain prices, to cite two, a deceleration of the North Korean growth rate, or in a circumstance where Chinese exporters basically demand cash on the barrelhead, an inability of North Korea to finance Chinese imports in the wake of declining export revenues. 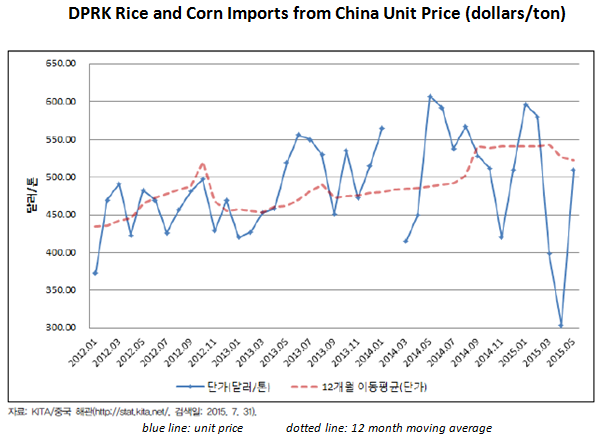 These explanations are not mutually exclusive but China stopped reporting any data on oil exports to North Korea in December 2013, making a quantitative analysis of the net movements in the terms of trade impossible. What can be said is that North Korea has benefited from a decline in the price of food imports (down 18 percent between May 2014 and May 2015), though the secular trend would seem to point to rising prices for imported food. 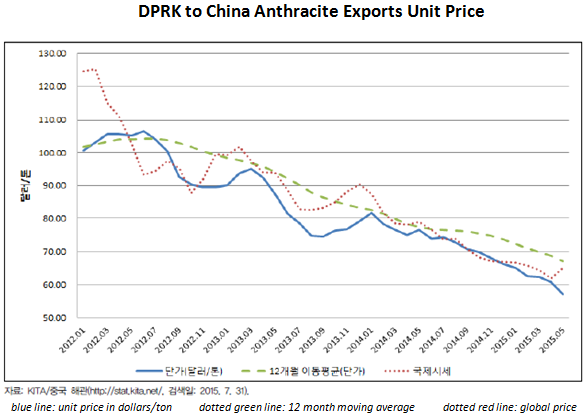 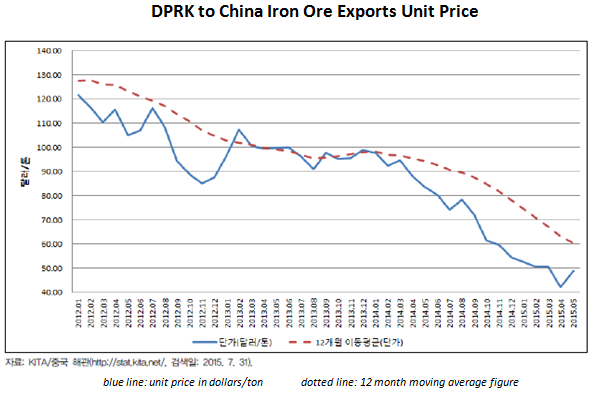 On the export side, the decline in commodity prices is clearly seen in the charts of anthracite and iron ore unit prices. As I argued in a previous post, in the case of anthracite, the price decline has been partly offset by the collapse of Vietnamese coal exports to China which has given North Korean exports a boost, at least temporarily. But iron ore volumes are declining along with price, so that the value of North Korean iron ore exports in May fell more than 70 percent from a year earlier and are down more than three-quarters from the level observed in May 2013.

In short, North Korea is highly dependent on trade with China which accounts for more than 80 percent of recorded trade. The slowdown of the Chinese economy and the decline in global commodity prices that has accompanied it, appear to be creating headwinds for the North Korean economy. Whether the Chinese downturn is sufficiently severe to create political instability in North Korea remains to be seen.  Keep watching this space.

The Scramble for Bauxite: Beware of Chinese Promising Gifts

Lessons from East Asia and Pacific on taming the pandemic