Exchange of Fire: Peninsula Update I

The central security problem on the Korean peninsula is not general deterrence but what is known as the stability-instability paradox. Precisely because general deterrence is stable, the North can take risks knowing that the probability of them ending in general war is low. Ideally such actions are designed to “fly below the radar”: to be of such a nature or intensity that they invite no retaliatory response at all. In the wake of the Cheonan and Yeonpyeongo-do shelling, however, the ROK Ministry of Defense and the US have toughened up rules of engagement and as a result, we have now seen the first serious exchange of fire across the DMZ in a long while. Although we still believe in the underlying stability of deterrence with respect to large-scale engagement, this incident will clearly test how far up the escalation ladder the two sides are willing to go to show resolve.

Given that there is much that we don’t know—particularly about North Korean motives—the best we can do is to provide a timeline to date. However as this goes to press at least one possible motive has surfaced. It was revealed late Thursday that North Korean Ambassador Ja Song Nam had sent a letter to the UN Security Council on Wednesday demanding an “urgent meeting” to discuss joint US-South Korean military exercises (the letter thus preceded the South Korean return of fire). Even though Ulchi Freedom—which kicked off on Monday--is largely a computer-simulation. But it does contain live-fire components and North Korea has repeatedly sought to put the exercises on the international agenda. Moreover, North Korea might have considered itself at risk precisely because of the earlier mine attack.

Before turning to the timeline, we first must comment on whether the North Koreans are actually responsible for what seems to be the precipitating event: the August 4 mine attack on the southern side of the Military Demarcation Line (DML) within the DMZ that left two ROK soldiers severely maimed. We have already heard from a few friends who are skeptical. But we are safe in reporting that to date there has been surprisingly little debate in Korea about the origins of the attack. Our canary in the coal mine is Hankyoreh. The left-of-center paper has criticized the messaging and organization of the Park administration’s response, but it has not questioned our working supposition—admittedly open to new evidence—that North Korea was responsible for the attack.

July 22: ROK Army soldiers on a routine patrol last pass through the gate where the August 4 mine attack incident subsequently occurs. The location is on the southern side of the DMZ near Paju.

August 4: Two South Korean soldiers, both staff sergeants, are maimed after three mines are detonated 440 meters south of the Military Demarcation Line (the red dotted line in the photo). 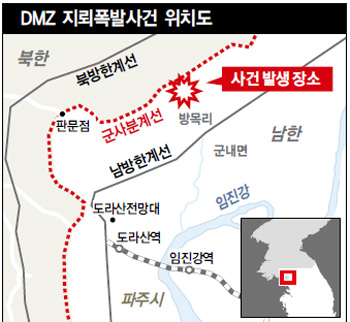 August 5 – 8: Former President Kim Dae-Jung’s 92 year old widow Lee Hee-ho visits North Korea for a 4 day visit but does not meet with Kim Jong Un. Seoul approved the visit but stressed that it had no official message to send Kim Jong Un through her.

August 9: An investigation team led by Brigadier General Ahn Young-ho takes journalists to the site of the mine attacks and presents the case that the attack was a deliberate attack by North Korea. He claimed the mine was placed directly in the areas near the door of a gate. Ahn also argued that the incident could not have been caused by previously-undiscovered mines becoming dislodged and shifting position given the geography of the immediate area.

August 10: The ROK Ministry of Defense, claims that KPA soldiers snuck across the border to plant the mines and releases a video of the explosion (uploaded on You Tube by the Korea Observer here). One possible criticism raised to us bilaterally was that if there is video footage of the explosion there should be video footage of the mines being planted. A look at the angle of the camera, the distance, terrain and foliage suggest that the mines could have been planted without being captured on tape. Kim Min-Seok, spokesman for the MND, claims that this was “a clear provocation from the North Korean military” and swears “a severe retaliation.” The South announces that it will resume propaganda broadcasts from speakers placed near the border. They had not been used for over a decade.

August 13: North Korea denies the allegations at the highest level. The National Defense Commission issues a statement denying the accusations claiming that “the puppets stored up some of our military’s mines that it had collected and used them to concoct a slander.”

August 14: North Korean refugee group Fighters for a Free North Korea launches a large poster and leaflet campaign by balloon denouncing the Kim regime. North Korea has in the past said that these campaigns constitute a casus belli.

August 15: President’s Park’s Liberation Day address is devoted largely to North-South relations. She addresses “the provocative emplacement of mines in the DMZ” as a “direct violation of the armistice agreement as well as the inter-Korea non-aggression accord. North Korea is trampling on the aspirations of Koreans to honor the 70th anniversary of liberation.” However the tone of the speech is surprisingly conciliatory. President Park calls for a resumption of the stalled family reunifications, the construction of a peace park within the DMZ, and expanding sports and cultural exchanges between the two Koreas.

August 17: US-ROK Ulchi-Freedom Guardian drills start and will last until August 28. President Park says “North Korea’s landmine provocation in the DMZ was a clear military provocation in which North Korean forces illegally crossed the military demarcation line and attempted to slaughter South Korean troops.” The KPA launches their own propaganda speaker campaign on the Eastern side of the country.

August 19: A ROK military source claims that the KPA is ratcheting up its combat readiness posture by opening up weapons portholes and intensifying artillery training. 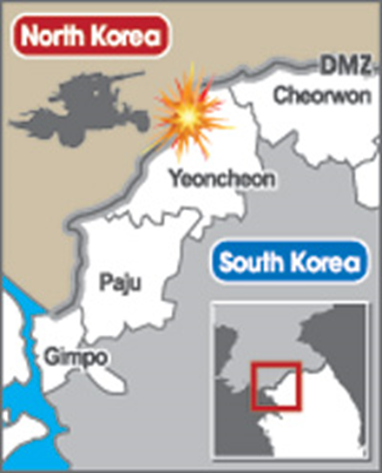 The Significance of Small Gestures: The Decision on Military Exercises