While the plunge in the price of crude oil has grabbed headlines for months, it overshadows the longer running, albeit interrelated, deterioration in global commodities prices more broadly. Everything from metals and ores, coal, and even food has been steadily declining in value for years. North Korea is heavily reliant on commodities such as anthracite and iron ore for its export revenues, and just as it rode the resource boom to its apex in 2011, it is now the victim of a steady and steep decline in world prices. Today we examine the global price effect on North Korea’s major exported commodities and to what extent this may hamper the country's economic outlook; tomorrow we ask whether or not North Korea can make marginal consumption gains in its imports of food and fuel.

North Korea’s Commodities Exports: How low can it go?

International market trends do not bode well for North Korean exports. Trade in anthracite (coal) and metal ores – specifically iron – made up half of the country’s annual export value in 2013. However, from an early 2011 peak, the international market prices of both coal and iron ore – along with many other metals - have experienced a steady and deep decline of around 50 percent in nominal value (Exhibit 1). 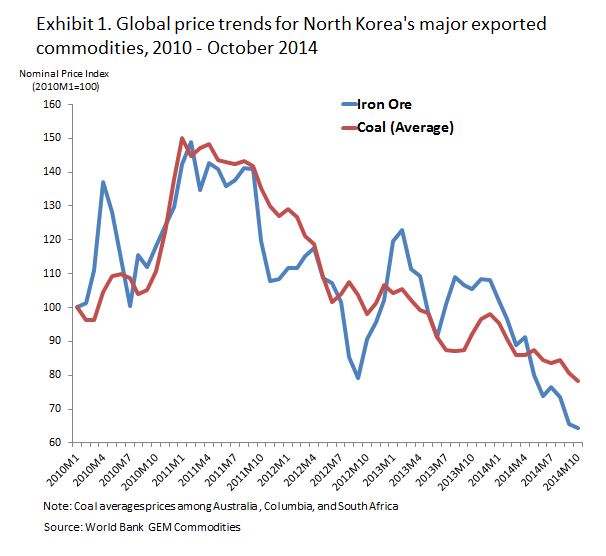 North Korea almost exclusively sells coal and iron ore into China, the same country whose transition to a less environmentally-taxing and economically sustainable growth model has contributed to a global demand shortfall for these inputs specifically. As Ryan Rutkowski at China Econ Watch argues (here and here), Chinese authorities are making concerted efforts to reduce the country’s dependence on coal in the long term. Similarly, global oversupply and a comprehensive construction slowdown in China has depressed the price of iron ore – which is used to make steel --  for the foreseeable future.

The corresponding drop in the unit prices that North Korea receives for its exports is clearly visible in trade data (Exhibit 2). In both the case of anthracite and iron ore, the unit price that partners (ie, China) paid the DPRK topped out in 2011 right as the commodities hit their price peak (see Exhibit 1), but has been on a steady downward slide since. While exported quantities of both goods look on track to be roughly the same as 2013, North Korea’s unit prices of anthracite and iron ore have dropped 26 percent and 35 percent, respectively, between 2011 and the first nine months of 2014. 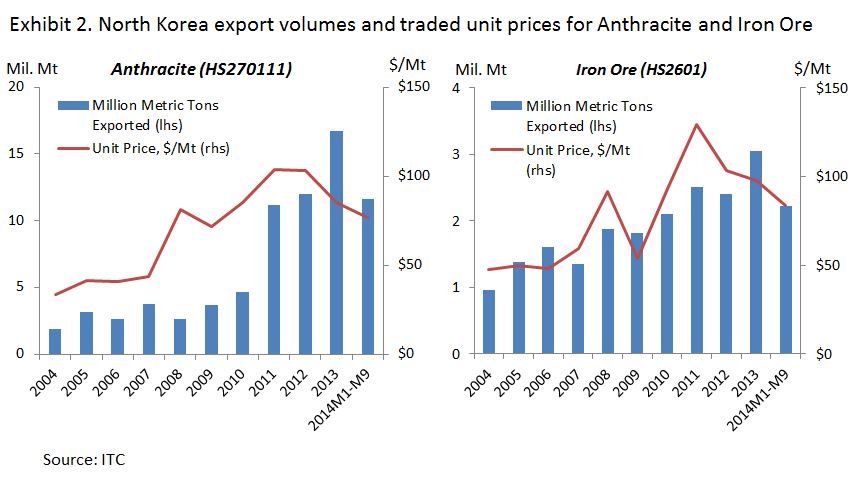 While I have argued before that North Korea’s isolation and dependence on China have probably resulted in artificially low prices for these traded goods, there is no doubt that the country is also a slave to natural global market forces, which are in turn affecting and being effected by China. In Exhibit 3, we can see that the unit prices China pays for North Korea’s anthracite and iron ore are highly correlated with the change in prices that it pays other importers, as well as year-on-year changes in global market prices. How much has North Korea lost this year in export revenue due to falling commodity prices? It is of course hard to tell for sure, but we can do a simple thought exercise to make a rough estimate. We will assume that the only commodities North Korea exports are anthracite and iron ore (iron made up around 72 percent of all of North Korea’s ore exports in 2013, but it also trades in lead and a few other metals). Secondly, we assume that unit prices for both commodities remained constant at 2011 levels, and multiply this value by the reported export volumes in the 2012-2014 period. 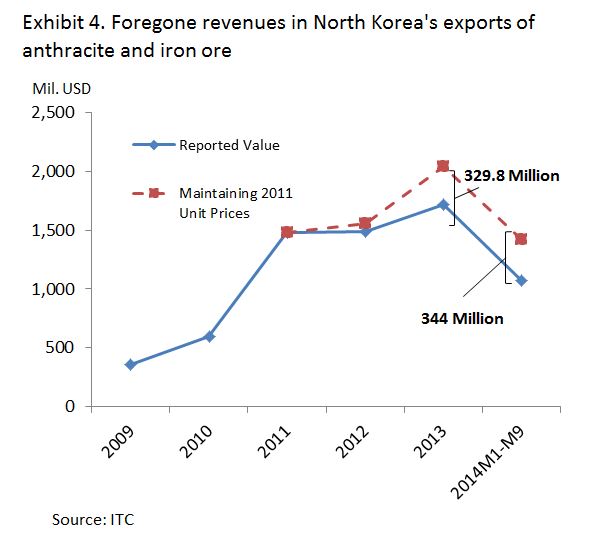 Exhibit 4 demonstrates that North Korea faces a widening gap in lost export revenues due to declining market prices. In 2013, foregone revenues were 329.8 million, about one-tenth of 2013’s total export value. In the first nine months of 2014 the differential is already at 344 million dollars, which would be closer to half a billion dollars in annualized terms. This is a sizable chunk of North Korea-China bilateral trade, and by extension total exports. But this is an oversimplified thought experiment: if we were really to think about the counter-factual of sustained, or increasing, Chinese demand and calculate a price elasticity, the value differential could be much wider.

The Glimmer of Hope

What goes down could very well come back up. This may be the case for the price of iron ore as China embarks on new infrastructure development plans. Moreover, the theoretical upside of tanking coal prices is that overwhelming losses for some competitors will lead mines to close, in turn decreasing supply and rebalancing the market. (But this is so far not happening: Australia and Indonesia are actually increasing coal output to save on unit costs.) Nonetheless, given the global slowdown in growth and the signaling of Chinese economic planners, I would not let too much ride on a price rebound anytime soon.

Whether or not market prices bottom out or make small gains in the medium term, there is no question that North Korea’s reliance on anthracite and metal ores is a substantial detriment to its trade balance; my estimate is something upward of a half billion dollars in 2014 will be lost due to deteriorating prices. Reliance on coal and iron also adds pressure to the country’s external financing abilities. It is probably no coincidence that North Korea’s 2011 trade deficit was its lowest since 2004-- and may have even resulted in a small current account surplus – right at the peak of the commodity boom.

But at the heart of the matter is how falling commodities prices will affect North Korea's broader economy going forward. One glimmer of hope is that the end of the commodity boom can actually hasten necessary reforms. Economic planners must be well aware that financing the status quo through resource extraction alone will become increasingly difficult. Perhaps out of necessity, North Korea already appears to be diversifying its traded offerings into textiles, clothing and other low-to-medium skill manufactures. Going further down the path of a sustainable, manufacturing-based export driven economy like South Korea will require broad reforms both internally, and in how they attract foreign investment and technology.

Tomorrow, we look at another possible upside to the commodities bust: that major declines in oil, maize, and- to some extent- rice could be a boon for North Korean imports and consumption.

2015 could be off to a very rough start for North Korean commodities exports. Radio Free Asia reports that so far in 2015, "little if any coal has crossed the border" between North Korea and China because the quality of the coal does not meet China's new environmental standards. Moreover, the Daily NK reported today that Musan mine, the site of North Korea's largest deposit of iron ore, may lay off 10,000 workers. Chronic power outages brought the mine to a halt on at least one occasion last year, and reportedly "exports to China have been cut off after the North rejected a demand from China asking that iron ore prices be lowered to 50 USD a ton."

We will stay on these important developments, but these initial stories suggest that the pain inflicted by North Korea's reliance on both commodities exports and the Chinese market could become far more acute this year.

Kevin, good piece.
You know, that recently the companies and industrial North Korean conglomerates got a lot of space to "breathe". Now those are oblieged to make their own business plans, upgrade their products and enlarge their business opportunities. The importance of the central plan diminished. We see "mushruming" of convenience stores at the moment, -open from 6 a.m. to midnight- and a push into other service segments.
It "smells" like in the early days of Chinese economic reforms. It could be a kickstart for the North Korean economy.

Chinese Steel Exports to the United States Dropped Dramatically in 2016

The Price of Oil, China, and Stock Market Herding