Yesterday, I presented a simple exercise to measure to what degree deteriorating global market prices for iron ore and anthracite have affected North Korea’s trade balance, given about half of the country’s exports come from these commodities. My rough guess is that North Korea will forego upwards of half a billion dollars in export revenue for 2014, a sizable sum given its total exports in 2013 were about $3.5 billion. And with recent reports that the North Korean coal trade has come to a standstill in January and the Musan mine may lay off 10,000 workers, commodity exports in 2015 could really take a nosedive.

But the multi-year broad decline in global commodities could also be a boon for North Korea as it needs to import crude oil and grains such as rice and maize. While foregone export revenues have been sizable, does North Korea gain from its ability to import more goods for less money?

The short answer is “yes”, “no”, and “I don’t know”. North Korea commercially imported cereals from a handful of countries such as Brazil, India, and South Africa in 2013, though China is by far its largest partner. Given little product differentiation among these commodities and a choice beyond China as a business partner, it’s feasible that North Korean traders can access global market prices. Crude oil is a bit more complicated, as China has historically been the chief supplier and the agreements/prices are probably as diplomatically-motivated as they are economic. Last year, for example, China recorded zero crude oil exports to North Korea in what many saw as a punitive embargo , though in reality North Korea is probably still getting oil from China.

Global price trends for crude oil, rice, and maize are shown in Exhibit 1. The price of maize has nearly halved since 2012; declines in the price of rice are less severe but on a downward trend. The shocking rout in oil only began last Summer; we have extended the graph through December 2014 to show the extent of the plunge. Its effects are generally not yet seen in trade data as pass-through -- and contractual agreements -- take months to adjust, but are already having profound impacts across the world economy. 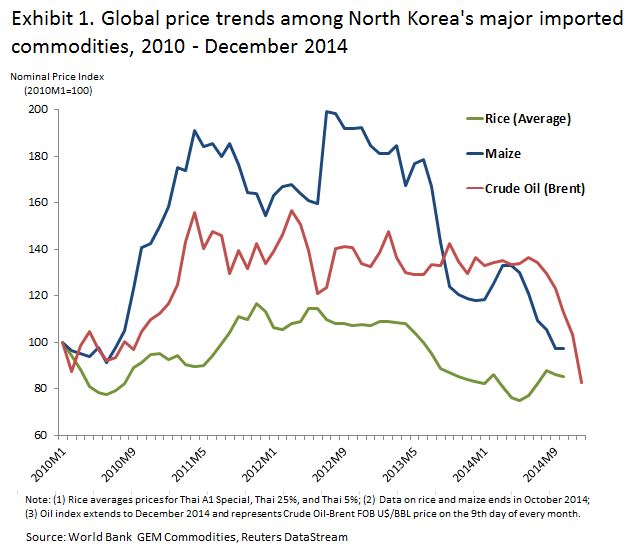 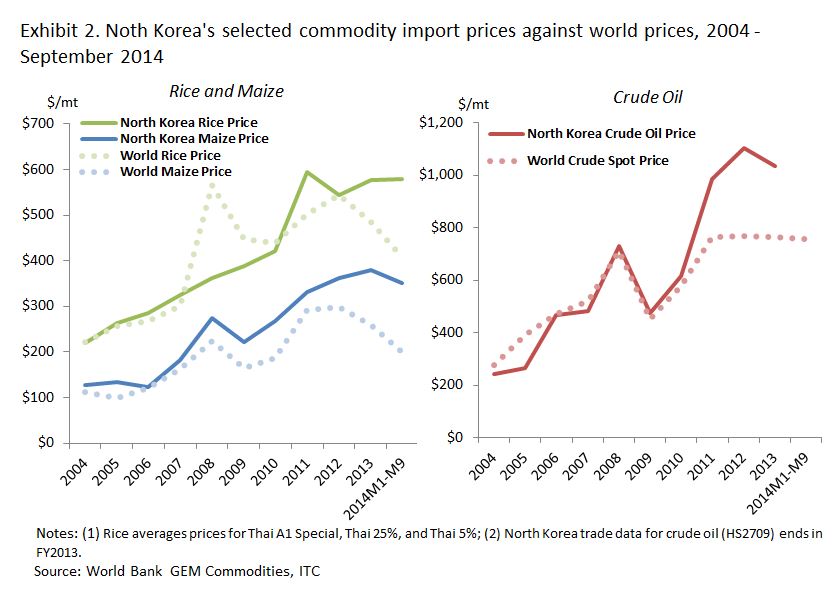 But around 2010 the prices North Korea paid for its rice, maize, and especially crude oil begin to diverge. In all cases, there is a wide discrepancy between what North Korea pays and the downward trend of global prices. It’s difficult to explain the discrepancy. There could be a lag as price fluctuations on a global level begin to translate to individual interactions between North Korean traders – though prices have tracked closely in the past. As trade data for 2014 becomes complete, we may see North Korea’s effective import prices begin to fall in all categories.

It is also very difficult to explain what is going on with crude oil in 2014, chiefly because we don't have the data. Global prices, on average, remained roughly the same from 2011 to 2013, but the implied price North Korea paid continued to rise until 2012. It’s possible that the reliance on China and politics are distorting prices and causing this discrepancy. It is also possible that the trade data is simply skewed, as China has taken to hiding its official exports of crude oil in times of diplomatic friction. Assuming that imports have really become overpriced, Russia could very well become a major source of fuel for North Korea going forward: Yonhap reports that Russia has indeed increased its crude oil imports into North Korea, but the amount is still less than 100 thousand tons.

A drop in the world price of oil and a warming of relations with Russia means that North Korea may be able to access cheaper oil this year, which could have a modest impact on the trade balance. But according to the admittedly fragmentary data we do have, North Korea has thus far not enjoyed any of the gains from falling commodity prices. It is a frustrating finding, considering how much citizens of the DPRK could benefit from increased consumption of these goods. Combined with the findings that exports of coal and metal ores have become a major negative drag on trade potential, North Korea is now in a significantly weaker position than it was at the height of the commodity boom.

Bricks and mortar in the BRICs