Marcus Noland and I have argued that the marketization processes that are taking place in North Korea are almost certainly generating more inequality, driven by spatial factors (the Pyongyang Illusion), the uneven process of marketization and rent-seeking and corruption that favors the very rich: the new donju class. It thus seems fair game to look at what is happening in South Korea as well, where we actually have some data.

UCSD hosted Thomas Piketty last month. His magisterial Capital in the 21st Century and the underlying empirical work that supports it with Emmanuel Saez, Anthony Atkinson and others have breathed new life into the study of income distribution. In particular, their work using tax returns has focused on the income accruing to the very top of the income distribution.

The work on Korea for the World Top Incomes Database has been done by Kim Nak Nyeon and Kim Jongil in a paper called “Top Incomes in Korea, 1933-2010: Evidence from Income Tax Statistics” (WTID Working Paper 2014/2). Parallel papers on Japan and Taiwan permit some regional comparisons. A useful new paper from the Korea Economic Institute by Yiagadeesen (Teddy) Samy explores the same period using a different dataset, Frederick Solt's Standardized World Income Inequality Database. However there are good reasons to believe that this effort to draw from a variety of existing sources probably underestimates the income of the very rich, and indeed the trends shown by Samy are quite different than those constructed for the Piketty project using national tax returns.

The punchline of the Kim and Kim paper is contained in the two figures below. As in a number of other advanced industrial states—most notably the US—the incomes of the top 1% and 0.1% have marched steadily higher over the last two decades. In Korea in 2010, the top 1% group earned over 100 million won a year and accounted for 12% of total income, up from about 7.5% in 1980. The top one-tenth of one percent—earning nearly 290 million won a year—now take home about 4.5% of all income in the country, up from 2% 25 years ago. Top incomes in Korea are now more concentrated than in Japan (as can be seen in the two figures) and France although it is lower than in the Anglo-Saxon cases—the U.K and the U.S.—which are among the high inequality outliers. Korea and Taiwan appear to have gone through broadly similar processes over the time period.

What is going on? First, a historical note, emphasized in Piketty as well: the recent rise in income concentration is not new but rather marks a return to patterns that were seen in the interwar period. This is true in Korea as well, although land rents play a much larger role in the income of the very rich before the disruption of the war, destruction of assets and land reform of the postwar period.

In the current period, the general slowdown in employment growth, in turn a result of both technological changes and deepening globalization with the region and China, is certainly a culprit. Although the increase in inequality is much more modest in the Samy paper using the SWIID data, he provides a useful assessment of these hypotheses and comes down in favor of an explanation emphasizing structural change, informalization of labor markets and deindustrialization in particular.

But while those developments explain why the incomes of the bottom 90% have slowed--and for some segments stagnated--they do not explain why those at the very top have seen rapid income growth. Although Kim and Kim are cautious given the data limitations, they spotlight two unfortunate imports from the Anglo-Saxon countries: a decline in marginal tax rates for top income earners and changes in corporate governance following the 1997-98 financial crisis that permitted managerial compensation to soar. Both Korea and Taiwan are seeing increasing political debates over rising inequality. If the Kim and Kim data are right, the debate is not merely ideological posturing but is anchored in very real social changes. 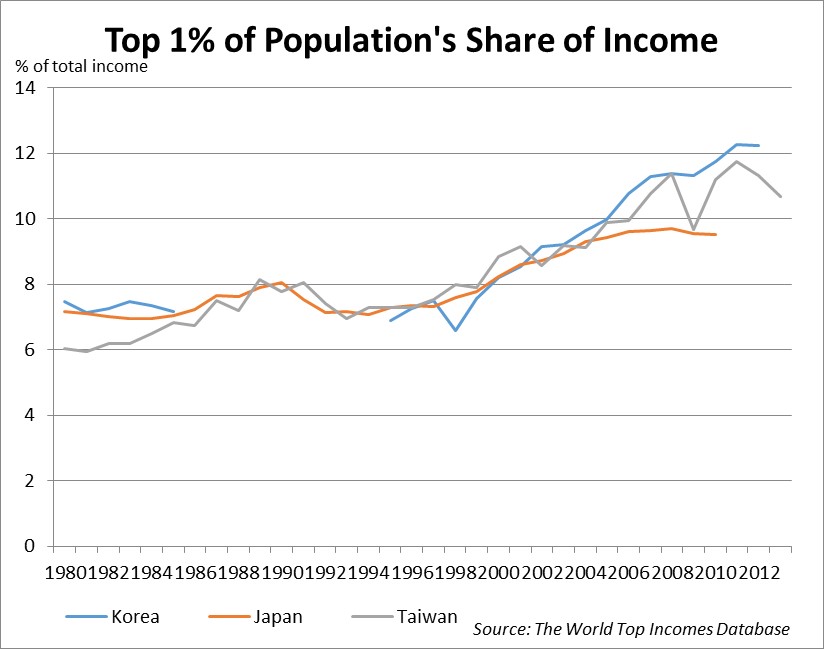 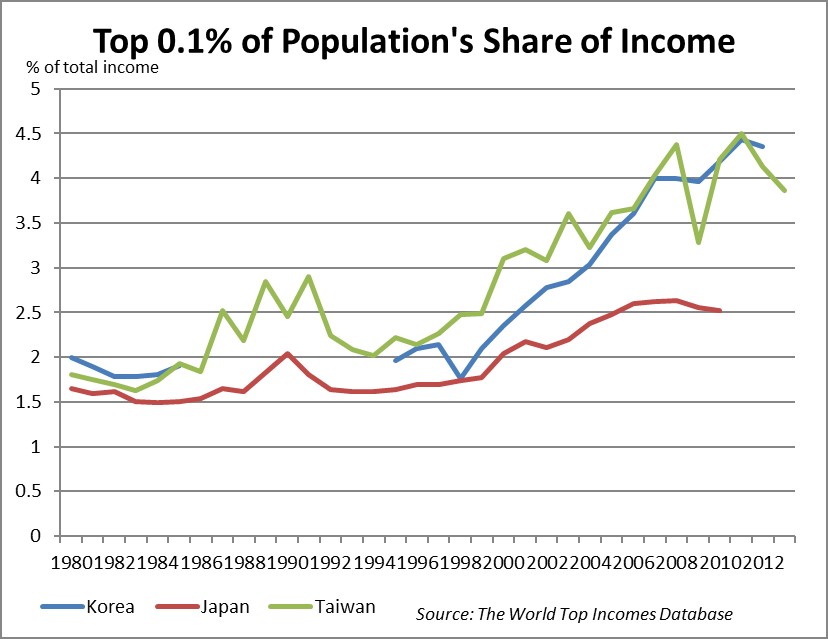 Among several key questions that Piketty's book, data, and ensuring inequality discussion omit or neglect is the following: Whether and to what extent real income of lower quintile(s) have risen, fallen, or been unchanged,
while that of upper quintile has risen? The omission is no less relevant in South Korea than in US. Although the slogan about "a rising tide raises all levels" is drastic oversimplification, the causal nexus here is of crucial importance from both analytic and policy perspectives.

Going It Alone in the Asia-Pacific: Regional Trade Agreements Without the United States