From construction in Qatar to mining in Malaysia where one North Korean worker was killed in an explosion last month, reporting in the Guardian has brought renewed scrutiny to the organized export of North Korean labor. (The paper is emerging as the paradigm of how one can be both “progressive” and critical of North Korean human rights practices.) In this connection, Steph Haggard pointed out to me that buried in the back of an Asan Institute analysis of the Commission of Inquiry report, are country-by-country estimates of North Korean exports of labor. The authors, Shin Chang-Hoon and Go Myong-Hyun, estimate that as of January 2013, North Korea exported 52,000-53,000 laborers to 16 countries. 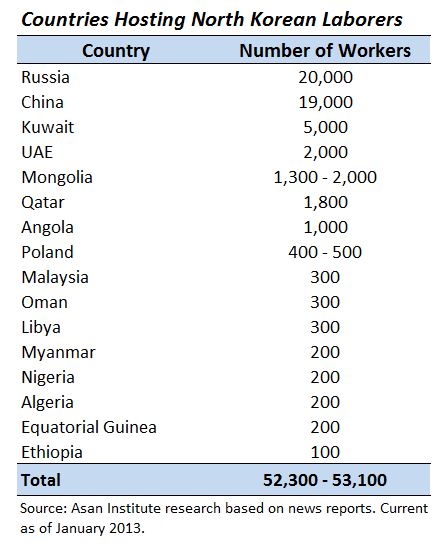 Such estimates are speculative by nature; there is plenty of room for honest disagreement,  and these estimates strike me as a bit low.  In a recent paper for the Swedish Institute for International affairs, Mikael Weissman cites a range of 74,000-81,000 with an additional 20,000 working in the China border region. He recommends that the revenues derived from these exports be subject to sanctions, and points out that in this area Chinese compliance is less central than with respect to trade in goods, though under current circumstances it would seem unlikely that one would get Russian cooperation either.

Indeed, in the Asan Institute report, Russia is listed as the leading country with 20,000 imported North Korean laborers, followed by China at 19,000. The Russian figure is of roughly the same magnitude of past estimates which put it at 10,000-15,000, and could be expected to rise if the two countries implement their agreement for North Korea to lease Russian agricultural land. According to the Chosun Ilbo, earlier this year five North Korean workers died of carbon monoxide poisoning at a construction site after a heater malfunctioned, but they were unable to escape because a North Korean guard had locked the door to their quarters.

The Chinese figure seems low, however. As we documented in blog posts over the past two years, the series of reports were released of agreements to increase the number of temporary work visas that China would issue to North Koreans, with 120,000 the last figure cited. Perhaps this number is too high or maybe the visa slots aren’t actually being filled in the wake of the deterioration in bilateral relations, but my sense is that 19,000 is too low.

Lastly the Asan Institute list omits a number of countries where North Korean–themed restaurants operate, but those totals are presumably rounding error in the greater scheme of things.

The raw figures are not the end of the story, however. One question concerns who is organizing this trade on the North Korean side, specifically if the exportation of labor is subject to the same informal privatization and domination by politically connected “prices” that other parts of the economy appear to be. My guess is that it is, but I have seen no evidence on this point.

A second question is whether there is any subversive aspect to the North Koreans journeys abroad, or if this is pure peonage. Here I suspect the answer varies depending on the location and nature of employment. It’s hard to imagine the North Koreans toiling in construction in Qatar are getting much more than sunburn. But as I noted in an earlier post, there were numerous accounts (including in this blog) of North Korean laborers stranded in the Middle East during the Arab Spring uprising, with some commentators interpreting this outcome as a deliberate policy choice by the North Korean regime, reflecting its fear of spiritual pollution by returning workers recounting what they had seen.

The deeper threat may come from something more prosaic than accounts of overthrown tyrants, however. As I documented in a paper written for the US-Korea Institute at SAIS, with regard to South Korean invested operations in North Korea, historically there has been little direct contact between South Korean managers and North Korean laborers, whether arrangement was at the Kaesong Industrial Complex, a processing-on-commission project, or an arm’s length transaction between a South Korean entity and a North Korean partner. The work practices remain essentially North Korean in nature. But reporting last year by the Asahi Shimbun claimed that many of the workers sent to China were actually working for South Korean firms, mainly in garment and precision instrument assembly, and that North Koreans were even working for US firms in the Tumen development zone in Jilin province. As I observed in that earlier post:

The implication seems to be that the potential for spiritual pollution is pervasive outside North Korea. It appears that an unintended byproduct of North Korea’s weak business enabling environment and the sanctions regime is to push North Korea outward, encouraging further weakening of the regime’s control over information.”

So we know that North Korea exports labor (though we’re not sure of the numbers) and that those laborers are treated abysmally. What we don’t know is having been exposed to a broader world with new ways of organizing economic life, if they return home intangibles worth more than their meager wages.

Before getting an economic power, South Korea earned a lot of money with "exporting" labor. Now it´s the North.
But, Marcus, can you explain, why those laborors don´t defect ?
I give you the answer: They are proud of doing an important job for their country.

What would China or Russia offer a North Korean seeking to defect? A trip to the nearest North Korean embassy? A one-way ticket to Pyongyang?

William, and US-ally Katar, where thousands of NK construction workers are living ?
Why don´t those people defect ?
Right: They love their homeland.

There is anecdotal accounts from Russia in which North Korean workers say they like the comparative freedom they have, including the possibility of spending the little extra cash they get beyond the remittances back to the DPRK for individual consumer goods. Is some subversion going on? Maybe. I think the bigger story though is marketization within North Korea, and the carving out of sectors in which state power cannot easily reach. This is not the start of revolution, but it is certainly a change that can have significant impact.

Mr. Noland,
I want to bring to your attention my recent coverage of North Korean laborers in Doha Qatar. Please find the link below an English article.
http://www.voanews.com/content/overseas-work-very-hard-on-north-koreans/...

I would say the decision not to defect doesn't require such elevated sentiments -- merely the same resistance to change that keeps people in unhappy relationships and bad jobs.

I would say nothing so high-flown as love of country is required for the decision not to defect -- all it takes is the same resistance to change that keeps people in unhappy relationships and bad jobs. (Perhaps "abusive relationships" would be closer to the mark. Those poor North Koreans are hoping that Mean Daddy Kim Jong Un will change . . .)

The Exportation and Exploitation of North Korean Labor