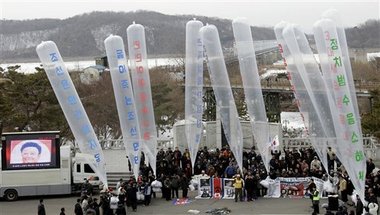 On the day of Osama bin Laden's killing flogging news on North Korea is flying straight into an informational hurricane but here goes...

When we last checked, in response to renewed balloon leafleting, North Korea was threatening to “stage a direct fire at the Rimjin Pavilion and other sources of the anti-DPRK psychological warfare to destroy them on the principle of self-defence.” Leafleting resumed last month on Kim Il-sung’s birthday and North Korea responded by warning of “unpredictable and merciless” fire. So far the only firing across the DMZ has been from the South Korean side—the Ministry of National Defense admitted that one of its soldiers had “mistakenly” squeezed off a few heavy machine gun rounds on 15 April (in celebration of the birthday of Kim Il-sung, no doubt) but the South immediately informed the North of this, and the incident did not escalate further.

And in another form of information technology, North Korea Intellectuals Solidarity reports that authorities have begun warning residents in the Chinese border region to turn in their cell phones that operate on the Chinese network or face punishment. Police have reportedly introduced devices to detect cell phone activity to punish “those spreading capitalist ideas and eroding socialism.”

In an earlier post, we commented on the difficulty in interpreting accounts of electrical shortages in North Korea, including those from foreigners currently in residence there. Good Friends’ “North Korea Today” No. 397 is devoted entirely to electrical problems.  The issue with Good Friends is sorting out what is true, what is not, and what was true at some time in the past, but interpreting it as an account of current reality would be misleading.

Goodfriends, which supports aid and allegedly cherry-picks price data, is also reporting rising food prices and depreciating exchange rates. This follows reports from Daily NK that food prices are falling and the exchange rate has stabilized (supporting the Daily NK line that food aid is unnecessary).  Readers from the intel community (you know who you are): do us all a favor and track these prices, particularly the black market exchange rate which can provide considerable insight into economic conditions.

Cyber warfare: according to Yonhap South Korean prosecutors are investigating the possibility that North Korea is behind a recent cyber attack that paralyzed the banking arm of Nonghyup, the South Korean agricultural cooperative, a story that would be very disturbing if the allegations prove true. The Nonghyup banking system is used not only by South Korean farmers, but others, including for example some organizations involved in human rights and refugee matters. It is alleged that again, as in some previous cases, that the attacks originated from servers based in China, raising the possibility of Chinese state culpability in these attacks. (North Korea must be the only country in the world to combine cyber warefare capabilities with limited domestic IT use.) Cyber warfare, the financial system, human rights organizations, and China could be a very noxious brew.

Lastly, Jeremy Gould and Peter Schurmann are the co-winners in our "North Korea: Witness to Transformation Fishing Trip Contest: Fourth Estate Division." Who know, they may even become famous!

STTB: Hungry, Corrupt, and Badly Governed (North Korea, not me)

Interview: Stephan Haggard on Marketization in North Korea and a Lot More