Adjusted for Aging, the US Employment Rate Continued to Rise Above Its Pre-Recession Level in 2018

In the beginning of 2018, the US employment-population ratio—the share of the civilian population ages 16 and older that is currently working—had recovered to its pre-recession level on an age-adjusted basis.[1] By the fourth quarter of 2018, it was 0.5 percentage points higher. Without adjusting for the effects of aging, the employment rate was still 2.2 percentage points lower than before the last recession.

Comparisons to pre-recession employment rates are not, however, a reliable guide to whether the United States is at or above full employment. Instead, they reflect a combination of both the cyclical rebound of the economy and structural trends in labor markets.

Adjusted for Aging, the Employment Rate Is Above Where It Was Prior to the Great Recession

Older Americans are much less likely to work than younger Americans: The employment rate for workers ages 25 to 54 averaged 79 percent in 2018, while the average for workers ages 60 to 64 was 55 percent. As a result, the aging of the population will tend to drive the employment rate down, even if employment rates for particular age groups (such as older men or younger women) remain constant. This represents a purely “demographic” effect that largely reflects child-bearing decisions made decades ago and which, as a result, does not reflect current economic conditions. 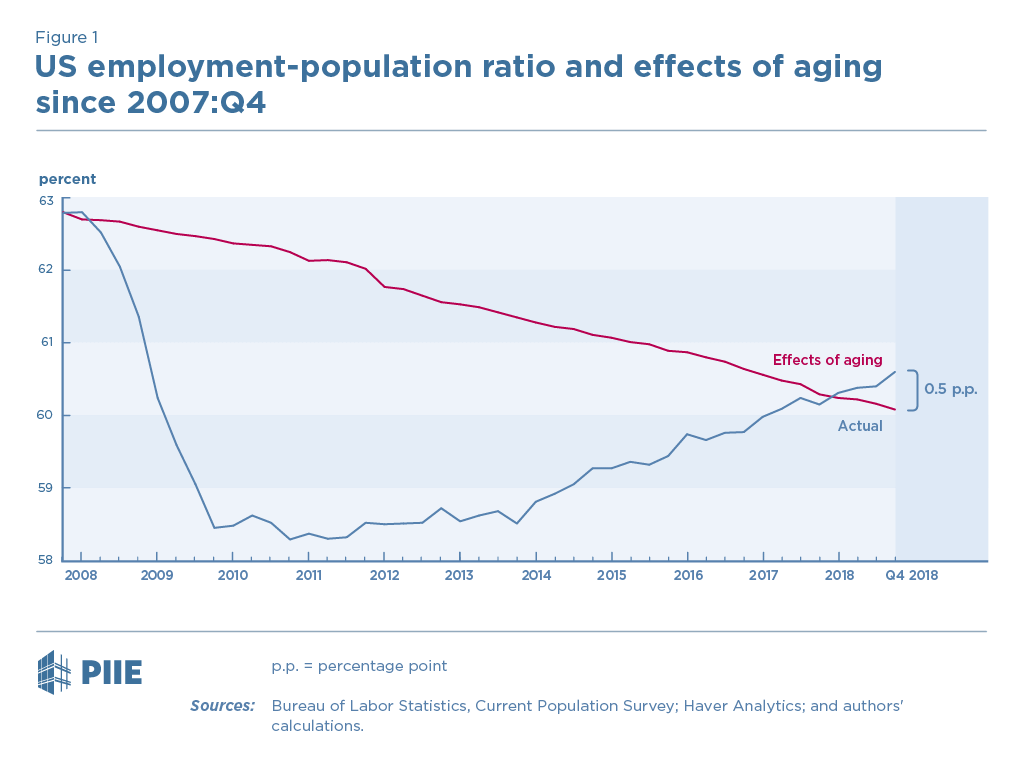 The increase in the age-adjusted employment rate from the fourth quarter of 2007 to the fourth quarter of 2018 shown in figure 1 represents the net effect of changes in participation rates since 2007 within particular age groups. Table 1 shows the effects by decomposing this age-adjusted increase into the portions attributable to six age-sex groups.

Reflecting this divergence for prime-age individuals and a smaller decline for women among younger individuals, the entire increase in the age-adjusted employment rate is attributable to women. For men, increasing employment among those ages 55 and older was only enough to offset declines for men prime-age and younger.

The magnitudes of the changes have evolved somewhat over time, as shown in table 2. Relative to the 2001–07 business cycle, the current cycle has featured slower employment declines for younger workers, continued employment gains for older workers, but at a slower rate for women, a similar downward drift in prime-age male employment, and a considerable improvement in prime-age female employment.

Most of the differences across demographic groups for the past business cycle are related to the severity of the initial shock, not the recovery. Since the last quarter of 2009, when the age-adjusted employment rate reached its low for the recession, age-adjusted employment rates for each age-sex group have increased by 0.3 to 0.6 percentage point per year, with somewhat faster gains for those ages 16 to 24. But there was much more variation across groups in the sizes of the initial declines, ranging from 0.1 percentage point per year for women ages 55 and older to 4.8 percentage points per year for men ages 16 to 24.

In the current business cycle relative to earlier decades, male employment trends are roughly similar, while trends for women have worsened, consistent with an overall decline in women’s employment since around 2000. 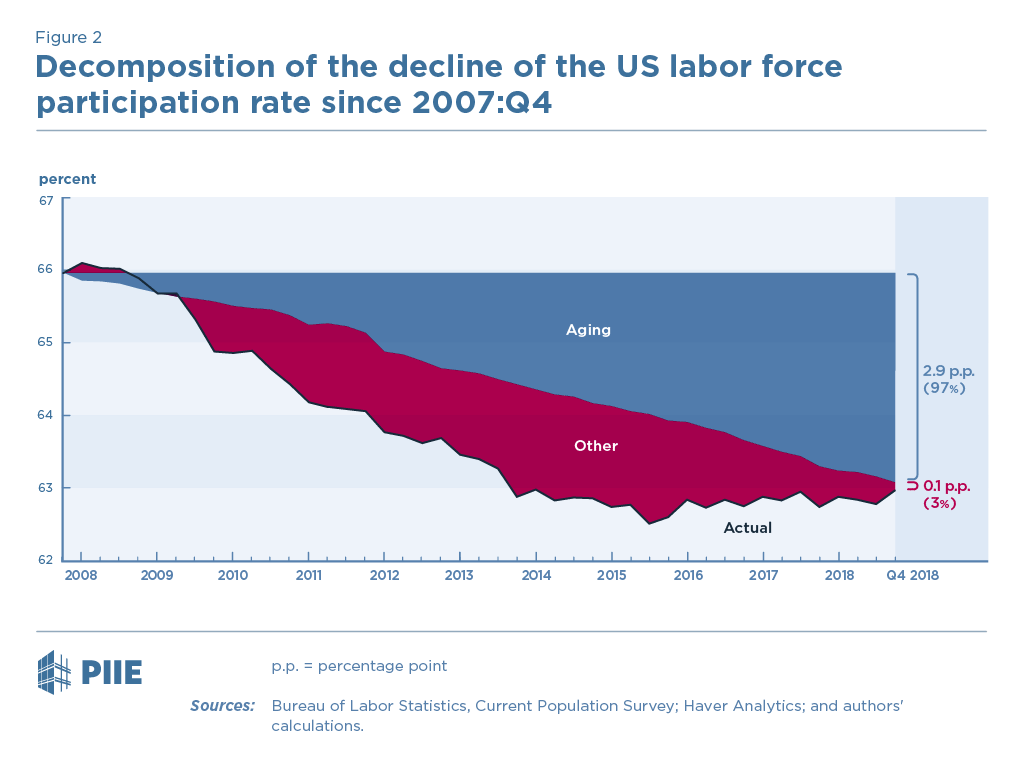 Is the United States At or Above Full Employment?

The trends described above reflect a combination of the cyclical behavior of employment in the wake of the 2007–09 recession and the many structural factors affecting employment rates for different age and gender groups. They do not, however, answer the question of whether the United States is currently at or above full employment for three reasons.

Second, underlying structural trends change employment rates over time. For example, from 1950 through 2000 women entered the workforce, raising employment rates for reasons that would have no implications for the assessment of slack in the economy. Over the last decade, most other countries have seen relatively larger increases in employment rates—in many cases without even adjusting for age. Although much of this rise appears to have been related to policies to encourage older workers and women into the workforce, it is possible that the United States should have seen a larger increase too, suggesting that we have more slack than this comparison would suggest.

Finally, the rate of unemployment consistent with stable inflation may change over time in response to globalization, variations in productivity growth, wage setting institutions, expectations, and other factors. That is why looking at price and wage inflation is a more reliable gauge of slack than comparisons of employment rates over time—even if these comparisons are done carefully by adjusting for age.

To calculate the effects on employment rates and labor force participation rates of the aging of the US population, counterfactual quarterly histories of these rates are constructed using data from the Current Population Survey conducted by the US Bureau of Labor Statistics. Employment and participation rates for age-sex groups are held fixed at their 2007 annual average values, while each age-sex group’s population share evolves along its actual path since the fourth quarter of 2007.

Data for the following age-sex groups are used in constructing the counterfactual (since they are the most granular data published by the Bureau of Labor Statistics on a not seasonally-adjusted basis):

1. Figures may not sum to totals due to rounding. The remainder of this blog post refers to the employment-population ratio as the employment rate.