Unemployment in the United States has rocketed up to nearly 15 percent in April and is heading even higher, confronting policymakers at the Federal Reserve with an unprecedented challenge. Since 1977, Congress has given the Fed a so-called dual mandate of maintaining both price stability and maximum employment. But what if the unemployment rate is only temporary, as many if not most workers believe? How should the Fed strike a balance under these circumstances? In the April household survey 18 million Americans assessed that their unemployment was temporary in nature. Whether or not this personal assessment is accurate is a crucial question but not for how the Fed should react in the near term.

If the layoffs were deemed to be more or less permanent over coming years, standard rules for interest rates, often labeled Taylor rules, prescribe a cut in the Fed’s policy rate of 10 to 20 percentage points. (The economist John B. Taylor laid out such rules based on the relationship among activity, inflation, and interest rates.) But if one assumes that the layoffs are more temporary, there is no need to increase monetary stimulus. The truth is uncertain but is probably between these two extremes. Since the Fed’s policy rate is currently constrained by the zero lower bound, its policy is all about describing the conditions for continued low rates and growth in the balance sheet.

By focusing policy on an outcome of returning the labor market as quickly as possible to its full pre-COVID-19 health in aggregate,[1] the Fed does not have to assess today whether the layoffs are temporary or permanent. Further, the eventual characteristics of recent mass layoffs are partly self-fulfilling—the stronger the recovery the more layoffs will turn out to be temporary. Maintaining business confidence in a speedy recovery supported by aggressive monetary and fiscal policies is critical.[2]

The Bureau of Labor Statistics asks questions on the Current Population Survey (household survey) that are designed to measure whether a job separation is permanent or temporary. While there is some controversy around the respondent’s self-assessment, many job separations in the current situation are exactly in the form of temporary layoffs.[3] For monetary policy rules based on unemployment gaps, this situation presents an unusual problem. 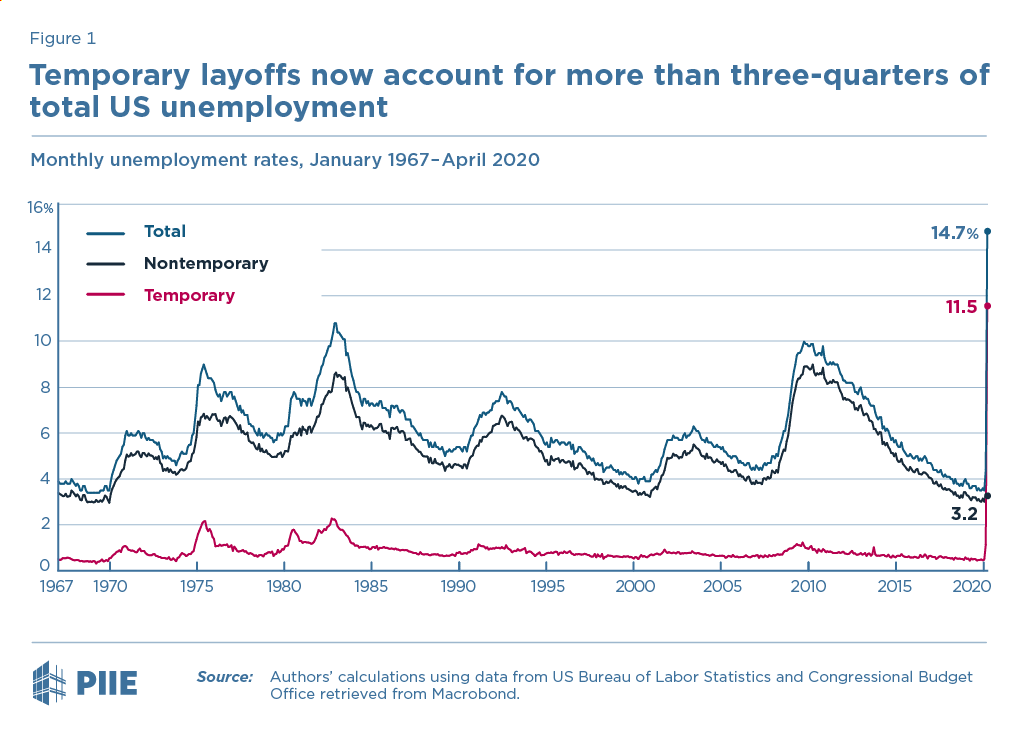 We use a simple method to compensate for temporary layoffs in interest rate policy rules. We generate Taylor rule–type interest rate prescriptions for unemployment gaps that remove temporary layoffs from the total unemployment rate and the so-called natural rate of unemployment (NROU).[5] The former is simple to do.[6] The latter is formed by taking the average temporary layoff rate in the last 12 months of the expansion as defined by the National Bureau of Economic Research (NBER) and adjusting down the Congressional Budget Office (CBO) estimate of NROU for the preceding expansion and following recession by this rate.[7] Figure 2 shows the two measures of the unemployment gap; again the current situation is unique. 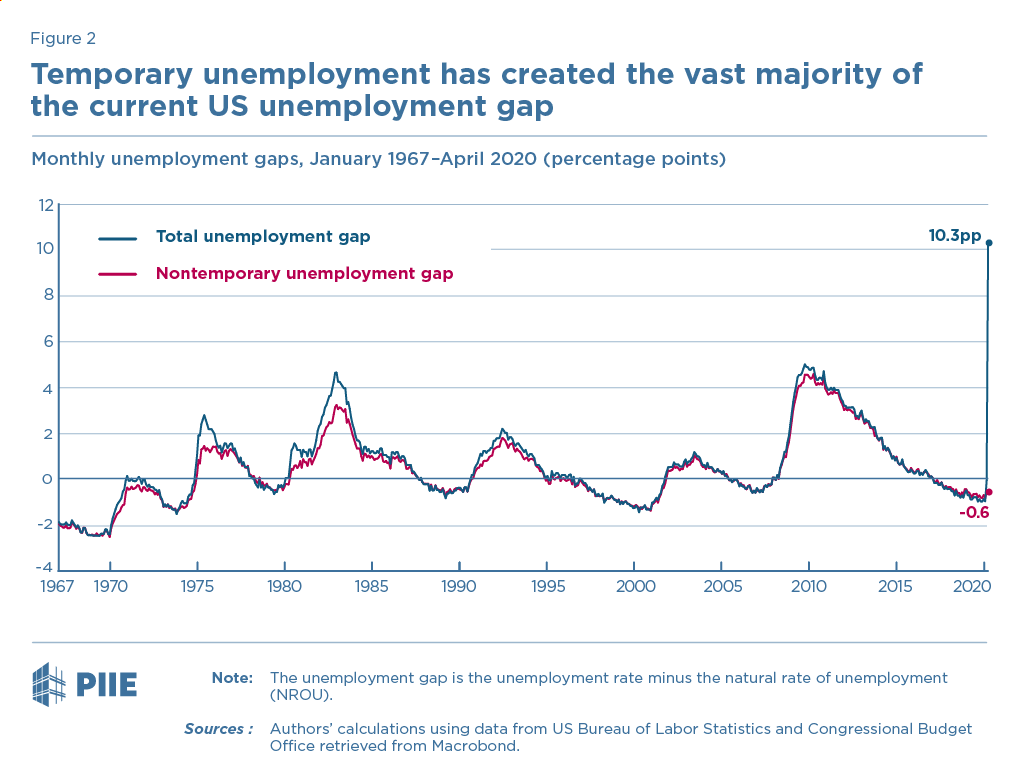 Table 1 shows the policy rate prescriptions based on the April 2020 Employment Situation report from the Bureau of Labor Statistics.[10] The difference is striking. As shown in figure 3 the rules work before April, but no one today can be sure of the correct prescription. It is possible that with good public health outcomes and a quick return of normal life that nearly all workers on temporary layoff will be recalled to their jobs. On the other hand, public health considerations, uncertainty, changes in tastes and production technology along with destruction of productive capital and standard Keynesian demand effects could turn many of the temporary layoffs into permanent job losses.

The Federal Reserve’s mandate for maximum employment does not distinguish between these good and bad outcomes. In the short run it is much easier for the Fed to achieve its employment mandate if the layoffs are temporary. In the medium term, if for reasons outside of the Fed’s control, [11] many of the temporary layoffs become permanent, then the mandate directs the Fed to set financial conditions based on its tools to speed the necessary reallocation of labor. With its main policy rate at zero and the infeasibility of deeply negative rates, the mandate-appropriate policy stance is implemented by forward guidance on its policy rate and balance sheet policies, including its lending facilities. This appropriate policy is captured in the first sentence of the April 2020 statement of the Federal Open Market Committee (FOMC): “The Federal Reserve is committed to using its full range of tools to support the U.S. economy in this challenging time, thereby promoting its maximum employment and price stability goals.”

Under the good outcome, the Fed could commit to maintaining zero rates and conducting asset purchases to complement the special lending facilities at least until the labor market returns to its pre-COVID-19 condition in aggregate. Under the bad outcome, the Fed should make a similar commitment. The experience of the Great Recession is that the Federal Reserve should not place weight on a large increase in so-called structural unemployment. In practice this is a temporary mismatch of available jobs and worker skills that is corrected over time.[12]

Of course, the Federal Reserve also has a mandate to promote price stability, which the FOMC interprets as inflation over the longer run at 2 percent to be consistent with its maximum employment mandate and the constraints of the zero lower bound.[13]

Inflation never sustainably returned to 2 percent in the expansion of the last over ten years and is likely to fall well below 2 percent over the next year. Thus, at least for now, there is no conflict with policy conditioned on achieving an outcome of returning the economy to its pre-COVID-19 condition. The FOMC could add a safety valve condition related to uncomfortably high inflation and inflation expectations to release it from the full commitment to return to pre-COVID-19 conditions. Note the use of the word “full”; if inflation and inflation expectations reach uncomfortable levels, then the appropriate policy needs to balance the two mandates, not just focus on price stability.

1. Some features of the labor market are highly likely to be different. Our focus is on aggregate measures such as the unemployment rate.

2. For example, the aggressive forward guidance advocated for by one of us (Simon Potter) and Krishna Guha.

3. There is evidence that some respondents in the survey incorrectly characterized their status and the level of temporary layoffs was higher. This potential misclassification does not affect our results for nontemporary unemployment gaps but would push the prescription based on total unemployment gaps further into negative territory.

5. For the inflation gap we use a standard coefficient of 1.5 and for the unemployment gap either 1 or 2 as the coefficient. If the coefficient is 2 it is known as the balanced approach rule; if it is 1 it is the standard Taylor rule.

6. We take the total unemployment rate and scale it by 1 minus the temporary layoff rate of unemployment. We adjust the CBO NROU in the same way.

7. The difference in results from using other methods to adjust the NROU is small and not significant for our conclusions.

8. We set the so-called r* at 2 percent for the earlier period, 3 percent in the late 1990s, and then adjust it down to zero over the last decade. The intercept in the policy rules is equal to r* plus the inflation goal of 2 percent.

9. For inflation we use the 12-month change in the personal consumption expenditure price index, excluding food and energy and the Federal Reserve’s 2 percent target. This target was not made explicit until 2012 but serves as a rough estimate of the Fed’s behavior and interpretation of its price stability mandate before it became explicit.

11. The Fed’s policy is unlikely to affect changes in tastes and technology, but its tools can mitigate the destruction of productive capital and weak demand.

12. See the New York Fed blog series from 2012 for more discussion on this point.

13. The frequency and duration of episodes where nominal interest rates are constrained by the zero lower bound decrease with higher long-term inflation objectives.

High inflation is unlikely but not impossible in advanced economies

Rethinking the Phillips Curve: Inflation May Rise Modestly Next Year