Is Brazil heading into a full-fledged fiscal crisis? Government officials say no, noting that President Dilma Rousseff, who has just completed a visit to Washington to try to repair ties with the United States, appointed an appropriately orthodox finance minister, Joaquim Levy, after winning re-election in 2014. Minister Levy announced an ambitious fiscal program for the next several years, envisioning a primary surplus target of 1.2 percent of GDP this year, followed by fiscal surpluses of 2 percent of GDP over the medium term. The broader macroeconomic stabilization plan aims to tighten monetary policy to rein in rampant inflation and increase infrastructure investments and boost exports.

For some who are not closely following Brazil, Minister Levy's medium-term adjustment strategy may seem achievable. But the target set for 2015 is likely to be missed because of a deeper than expected recession—GDP is projected to contract by around 1.5 percent to 2 percent. Many economists still believe the economy will improve in 2016, however. Better growth prospects would increase revenues, making it easier to reach medium-term fiscal targets. This is all well and good, provided one assumes that Brazil's current fiscal woes, underscored by a primary deficit of 1.3 percent last year,1 is cyclical in nature. Not so, the International Monetary Fund (IMF) would say. The figure below shows the IMF's structural deficit estimates and projections for Brazil over a period of 15 years. 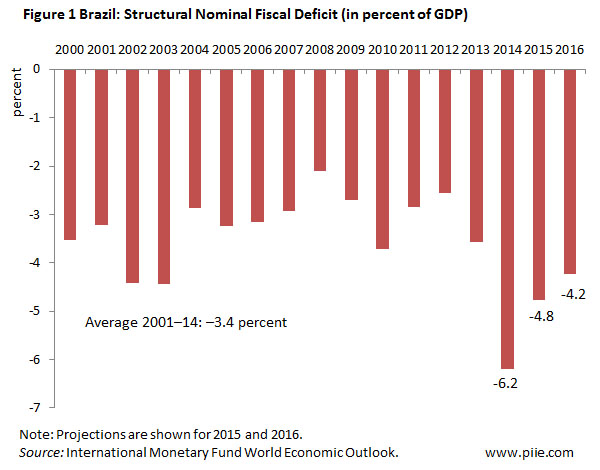 Brazil's structural deficit stems from a rigid expenditure structure: Earmarked spending and constitutional entitlements prevent the achievement of an adequate balance between expenditure cuts and tax increases. For example, social benefit spending and pensions are linked to the minimum wage, which is indexed by lagged nominal GDP growth. It is therefore not surprising that the current fiscal adjustment program is heavily reliant on revenue increases. Needless to say, it is very difficult to raise revenues under recessionary conditions.

Brazil's primary fiscal deficit, excluding extraordinary revenues and other measures, equaled 1.4 percent of GDP as of May 2015. Thus, to attain the primary surplus target of 2 percent of GDP in the next 18 months, the government needs to reduce its fiscal deficit by the equivalent of 2.3 percent of GDP. This is no small feat, especially given the medium-term pattern of expenditures. Between 2004 and 2014, the ratio of general government expenditures to GDP increased by 0.2 percentage points per year, while social spending (pensions, unemployment benefits, and other social expenditures) grew by 0.1 percent per year, or half of the yearly expenditure increase.

Assuming that spending will continue to rise at this pace while revenues remain constant as a share of GDP—that is, if the fiscal adjustment is unable to raise the revenue-to-GDP ratio from an already high level of 35 percent of GDP—the underlying primary fiscal imbalance will have risen to just over 3 percent of GDP by 2018. This imbalance excludes expenditure pressures arising from greater benefit spending driven by worsening demographics and a rise in unemployment stemming from the recession.

As of July 2015, none of the revenue-enhancing measures contained in the fiscal plan have come into effect. Some have yet to be approved by Congress. In the meantime, President Rousseff's approval ratings have dropped to 9 percent from 12 percent in March, and 40 percent in November 2014. Political repercussions from the oil company Petrobras bribery scandal and Rousseff's unpopularity have increased animosity between the executive and legislative branches of government, threatening to become a full-blown political crisis by year-end. Brazil thus appears to be entering a dangerous and unpredictable phase with the growing political turmoil—increasing the risk that a sovereign ratings downgrade and a serious fiscal crisis may be close at hand.

1. According to the official figures, the primary deficit in 2014 was the equivalent of 0.6 percent of GDP. This, however, includes substantial and extraordinary revenues, as well as budget arrears that were pushed back to 2015. Adjusting the numbers for these two factors yields a deficit of about 1.3 percent.

Brazil: Too Many Hurdles after the Olympic Games