The European Central Bank (ECB) signaled in October that it would consider an increase in monetary stimulus in December, noting that it was monitoring "the strength and persistence of the factors that are currently slowing the return of inflation to levels below, but close to, 2 percent in the medium term." Economic activity in the euro area has improved somewhat recently, but the case for further stimulus is overwhelming. It is critical that better rates of growth do not mask the still dismal levels of activity and inflation. GDP is growing at a moderate clip; high frequency indicators, such as the Purchasers Managers Index (PMI) are improving towards post-crisis highs; and job creation has strengthened. Money growth has accelerated, and credit creation has started to show signs of life.

Yet despite this incipient recovery in growth indicators, the levels of activity, inflation, and inflation expectations remain below desirable levels. Figure 1 shows that the level of GDP has barely reached precrisis levels and is well below the levels in the United States and the United Kingdom. The United States reached a similar precrisis level in 2010, when the Federal Reserve was in the early stages of its monetary policy easing program. The Fed ended its easing program four years after GDP reached the precrisis level and waited an additional year to hike rates. By this simple yardstick, the ECB can be expected to continue expanding monetary policy at least another four years and keep rates on hold until the next decade. 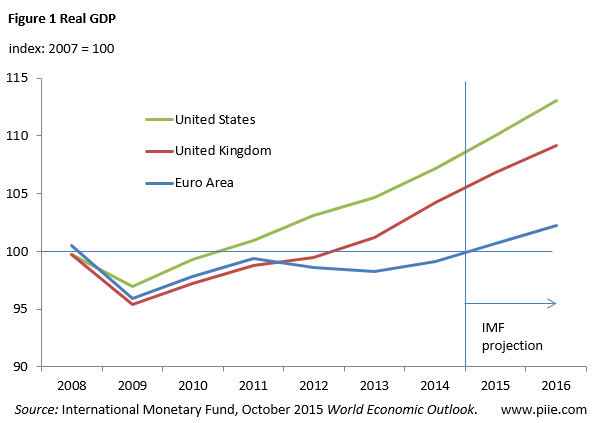 The outlook for inflation and inflation expectations is similarly weak. Headline inflation is distorted by the effect of commodity prices. But core inflation is barely 1 percent. Adjusted for the impact of the increases in indirect taxes during 2011–12, inflation has been around these levels since 2010. Because of the large slack in the economy, there is little reason to believe that core inflation is going to pick up anytime soon. Inflation expectations are reflecting this weak inflation outlook. The 2015 Q4 ECB Survey of Professional Forecasters (SPF) expects headline inflation to reach just 1 percent in 2016 and 1.5 percent in 2017, and recent experience shows that these surveys tend to be too optimistic. Long-term inflation expectations remain too low. The median point forecast of the SPF is 1.9 percent but with clear downside risks: Because most of the individual forecasts submitted to the SPF have downside risks, the median average forecast is just 1.75 percent. In fact, the median of the means from each individual probability distribution is just 1.75 percent.

Market inflation expectations are even lower. Figure 2 shows the term structure of 1-year inflation rates extracted from inflation swaps. It shows a lower profile than the inflation forecast of the SPF and suggests that markets expect euro area inflation to remain below 2 percent until 2024. 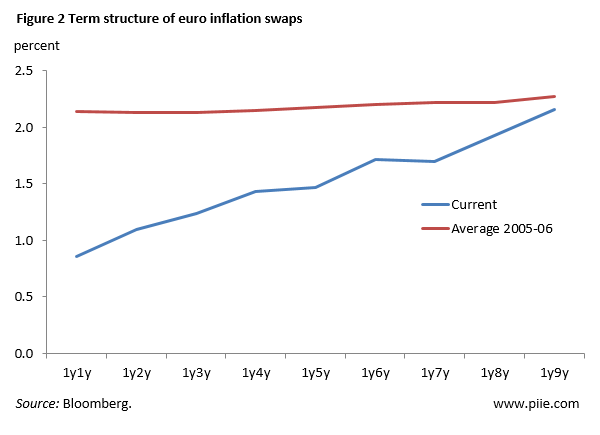 What should monetary policymakers do? In addition to increasing the size of the quantitative easing (QE) program and cutting the deposit rate further, three additional steps should be considered.

First, revise the definition of price stability to a symmetric target of 2 percent over two to three years. As I argued here before the QE program was launched, this action will clarify the mandate of the ECB, eliminate public confusion, and better anchor inflation expectations. The current definition of "close, but below, 2 percent" leaves too much margin for interpretation and is a source of downside inflation risks that the euro area cannot afford.

Second, change the composition of the asset purchase program from weights based on the capital key of each country in the ECB to weights based on the market share of each country's debt in total euro area debt. This step will eliminate the distortion created by the capital key weights, which leads to excessive purchases of German government bonds. Such an action will also facilitate an increase in the pace and amount of purchases. Given that potential losses from the QE program are not shared, this change should not be seen as an attempt to backdoor mutualization of losses.

Third, change the forward guidance associated with the QE program. Eliminate the calendar guidance (that states that asset purchases will last until September 2016) and replace it with a clear, open-ended, state contingent guidance. For example, the ECBshould continue the program until it can forecast, in a credible and sustained manner, a return to 2 percent inflation over the medium term. The qualifiers "credible" and "sustained" are key, as they would indicate that a forecast that just touches 2 percent will not be enough to end the program. In fact, after so many years of below target inflation, the ECB should explicitly propose a period of above target inflation, in order to generate average inflation of 2 percent over the medium term.

This package of actions will reinforce the monetary policy stimulus of the ECB, speed up the recovery of growth and inflation, and leave the euro area better prepared to face the next downturn.

A New ECB Outlook? Part I