Council of Economic Advisers (CEA) Chair Kevin Hassett recently argued that US tax cuts typically have very large effects on growth outside of the United States. This post investigates the extent of international spillovers, using a standard approach in the empirical literature on the effect of tax changes,[1] and finds no statistical basis for Hassett's argument.

Hassett comes to this conclusion in his April 23 remarks:

CEA’s own in-house analysis finds that exogenous tax changes in the world’s largest economy have large effects on global growth […] Applying the Romer & Romer exogenous tax shock series to a global structural vector autoregressive model indicates that a 1 percent cut in U.S. taxes as a fraction of GDP raises growth in the European Union by 0.8 percent in the year immediately following, with a peak impact of 1.2 percent after 2 years. We can reject the null hypothesis of no effect with 95 percent confidence. The estimated effect on the rest of the world is even bigger, with a peak impact after 2 years of 2.1 percent, and we can actually reject the null with 95 percent in both years 1 and 2.

With the United States accounting for only one-fourth of the world economy, this last sentence would imply a multiplier of 8 for world GDP growth. This would be extraordinary, as the range for tax multipliers is typically between zero and 3.

Replicating the CEA analysis exactly is not possible, as the underlying analysis has not yet been made public. It is, however, clear that CEA (2018) uses the Romer and Romer (2010) tax shock series. Based on official government sources, presidential speeches, and congressional documents, these authors identify a total of 110 separate changes in tax liabilities in the period 1947–2006. Among them, 70 of these changes to tax law were “not motivated by current or projected economic conditions” (Romer and Romer 2007) and thus do not suffer from reverse causality, making them useful for studying the effect of tax changes on output growth.

where Y is the logarithm of US or EU real GDP, ΔT is the measure of US exogenous tax changes, and et is a disturbance term. Observations are quarterly, start in 1961 (quarterly real GDP data for EU15 are not available from the Organization for Economic Cooperation and Development for earlier years), and end in 2006. Lags of up to 12 quarters for the effect of the tax shock (N = 12) are allowed, and the normal dynamic of output growth is controlled by including past observations of real output growth (P = 12) as control variables. The impulse response function is estimated using the local projections method. 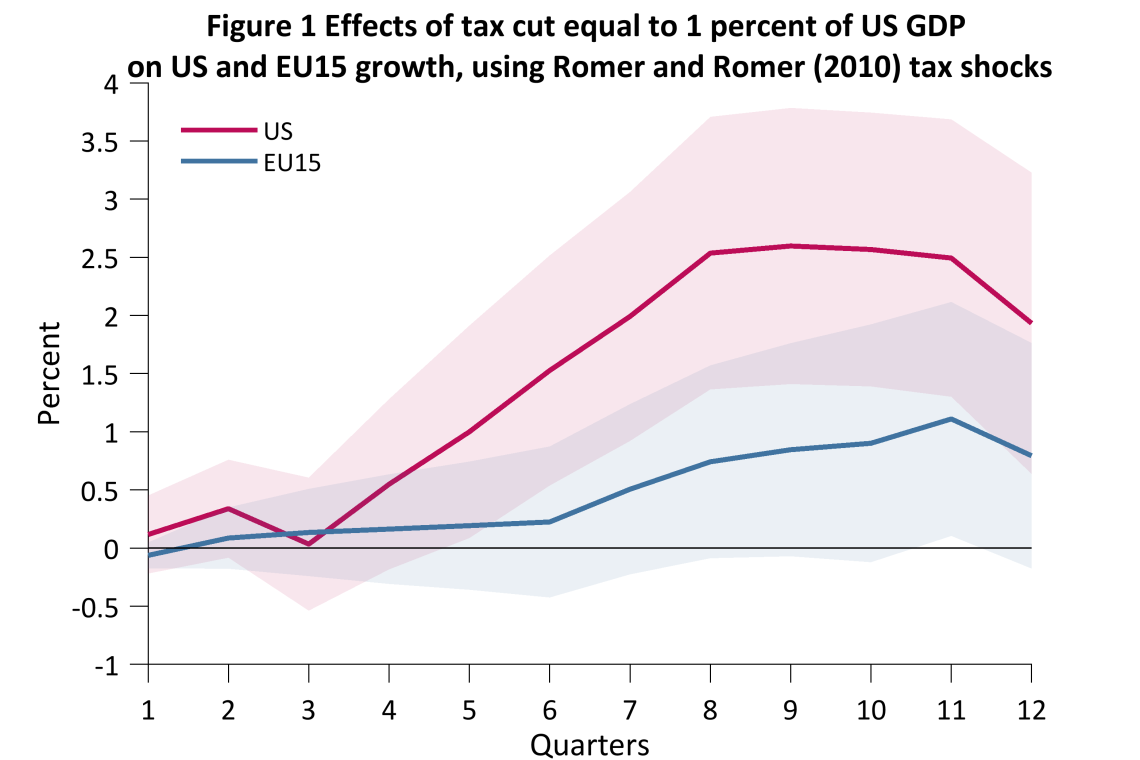 Note: One-standard-error confidence bands (denoted by shaded area) are based on Driscoll and Kraay's (1998) standard errors with four lags, which are robust to heteroscedasticity and serial correlation.

Figure 1 summarizes the results of estimating this equation by showing the cumulative effect of a US tax decrease of 1 percent of GDP on the path of US and European real GDP relative to normal (in logs), together with one-standard-error bands. For the United States, the magnitude and shape of the effect of US tax cuts on US GDP is very similar to the original finding of Romer and Romer (2010). In the quarter when the tax cut occurs and the following three quarters the effect is small and not statistically significant. It then increases steadily and reaches a maximum effect of 2.8 percent after nine quarters.

While the effect is large, sustained, and highly significant for the United States, it is small and not significant for the European Union. In fact, the null hypothesis of zero effect cannot be rejected with 95 percent confidence. The magnitude of the point estimate is also different than in CEA (2018). Rather than being 0.8 percent after one year, the effect is only 0.2 percent. The maximal effect also happens one year later and is the only point that is significant with 68 percent confidence.

In short, using a standard approach in the literature, we cannot obtain anything close to the large international spillover effects of US tax cuts reported by CEA (2018).

Interestingly, we can obtain point estimates that are closer to those of CEA (2018)—but not anywhere close to being statistical significant—if we use an alternative version of the Romer and Romer (2010) exogenous tax series that distinguishes between unanticipated and anticipated exogenous tax changes (Mertens and Ravn 2012). While there are valid reasons for only using unanticipated shocks in a regression framework like the one employed here, removing anticipated tax changes—which have long implementation lags—greatly decreases the number of exogenous tax shocks on which our estimation relies.[2] As a result, there is a greater risk that the results are driven by particular tax acts that may have occurred under specific economic circumstances instead of being robust across all tax acts.

As illustrated by figure 2, which compares the two tax series, relying on only unanticipated changes in tax liabilities also mischaracterizes Reagan’s fiscal policy as a small unanticipated tax cut of only 0.3 percent of GDP in 1981 rather than as the largest sequence of tax cuts in US postwar history. In Mertens and Ravn (2012), the bigger tax cuts that followed in 1982 (1.4 percent of GDP), 1983 (0.9 percent of GDP), and 1984 (0.6 percent of GDP) are all considered anticipated and are thus not included in the regression.[3] 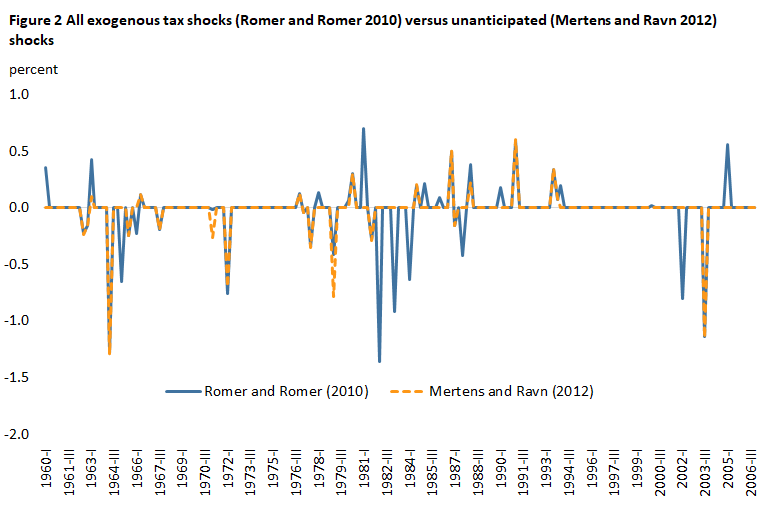 Figure 3 shows the results of re-estimating the equation using the Mertens and Ravn (2012) exogenous and unanticipated tax shock series. Unsurprisingly, the standard error bands are wider for both the United States and EU15 than in figure 1, as this series contains fewer non-zero observations for the variable of interest. More interestingly, the same point estimates for EU15 that are reported in CEA (2018) appear: 0.8 percent after one year, 1.2 percent after two years. Nevertheless, these point estimates are not statistically significant at the 95 percent confidence level. Even at the 68 percent confidence level, the effect is only statistically different from zero in the first quarters following the tax cut.

Note: One-standard-error confidence bands (denoted by shaded area) are based on Driscoll and Kraay (1998) standard errors with four lags, which are robust to heteroscedasticity and serial correlation.

The CEA indicates that their results come from a more complex vector autoregression, which could explain some of the difference with our own results. It would, however, be surprising for a standard multivariate approach to give dramatically different results than a standard univariate approach. Typically, these two standard approaches give comparable point estimates and standard errors.[4] Without further evidence, the spillover estimates presented by CEA (2018) are unconvincing.

1. A similar approach is used in Cohen-Setton et al. (2018a) to estimate the impact of large fiscal expansions in OECD countries over the past 40 years and in IMF (2017) to estimate the cross-country spillover effects of fiscal shocks.

3. We use the most recent version of the Mertens and Ravn (2012) series that was used by Mertens (2018) to estimate the near-term growth impact of the Tax Cuts and Jobs Act (TCJA) of 2017. Cohen-Setton et al. (2018b) challenge the findings of Mertens (2018) and predicts a smaller impact of TCJA because fiscal multipliers are lower in good times.

4. The size of standard error bands is, for example, not drastically different across univariate and multivariate approaches in Romer and Romer (2010).

GOP Tax Plan Will Stunt Innovation in Its Infancy