In defense of concerns over the $1.9 trillion relief plan

Those economists (like myself) who agree with Treasury Secretary Janet Yellen about the need to “go big” on a protection and stimulus package, but who have misgivings about the size of the Biden administration’s $1.9 trillion coronavirus relief plan, are getting criticized as overly concerned about overheating and inflation. A healthy debate has erupted. This blog post addresses three main issues in that debate and explains why I am concerned: first, the size of the output gap—i.e., the gap between actual and potential output in the economy; second, the size of the multipliers—i.e., the likely effects from the stimulus; and third, how much inflation an overheating economy may generate.

On the output gap

In his discussion earlier this month with former Treasury Secretary Lawrence H. Summers, Paul Krugman said that we do not know how to measure output gaps. I agree and I am on record questioning output gap measures. I have seen them manipulated to show for example that the economic situation in some countries was not so bad and that there was little room for expansionary demand policies. In this case, however, we can derive a plausible upper bound for the size of the output gap.

In January 2020, the unemployment rate was 3.5 percent, the lowest since 1953; it can reasonably be taken as being close to the natural rate. Put another way, output was probably very close to potential. The Congressional Budget Office (CBO) has estimated the potential real growth for the past few years at around 1.7 percent. Given that actual real GDP in 2020 Q4 was 2.5 percent below its level a year earlier, this CBO estimate implies an output gap in 2020 Q4 of 1.7% + 2.5% = 4.2%, or, in nominal terms, about $900 billion.

Given the supply restrictions due directly or indirectly to COVID-19, $900 billion is undoubtedly an overestimate of the gap that could be filled by an increase in demand. The pandemic has severely lowered potential output and will continue to do so for at least a good part of this year. Suppose, conservatively, that potential output will still be down by 1 percent in 2021 relative to where it would have been absent COVID-19. Then the output gap that could be filled in 2021 by an increase in demand is only $680 billion.

If the $1.9 trillion program passes, it will come on top of the $900 billion program passed in December 2020—a total of $2.8 trillion. As I have argued elsewhere, it is also likely that the excess household savings accumulated in 2020, to the tune of about $1.6 trillion, will be partly spent. Let me be very conservative again and leave aside both this potential additional demand (but an additional $600 billion in consumer demand does not strike me as implausible) and any increase in spending from the Biden administration's promised infrastructure program.

What are reasonable values for multipliers? Three points explain the diversity of opinions. First, there is no such thing as a single universal multiplier. Multipliers for spending, tax cuts, subsidies, and transfers to states are all different. Multipliers depend very much on whether people are optimistic or not, whether they feel liquidity constrained, and so on. These perceptions change over time. Second, partly because of this unpredictability, we just do not have very good estimates of multipliers; see for example the very good survey by Valerie Ramey. Third, a nerdy point: Multipliers affect the marginal propensity to consume in a very nonlinear way. Recall the textbook formula for the multipliers associated with tax cuts, m=c/(1-c), where m is the multiplier and c is the marginal propensity to consume. If c=0.5, the multiplier is 1. If c=0.3, the multiplier is 0.4. If c=0.7, the multiplier is 2.3. Being able to tell whether c will be 0.3 or 0.5 is tough.

Still, it is worth making some rough guesses.

Assuming interest rates remain unchanged—that the Federal Reserve does not respond to the proposed program—and ignoring the effect on imports (which is small for the United States), any direct spending by the government has an initial direct effect on domestic spending of 1, and thus a multiplier greater than 1 (1/(1-c) in the textbook formula). This seems like the right multiplier to use in evaluating the part of the package that involves direct spending to fight the pandemic.

What about the checks to households, the unemployment benefits, childcare credits, and other transfers? It has been argued that recipients will save most of the money, so multipliers will be low. I am more skeptical for two reasons. First, there is a clear tension in arguing that the motivation for these measures is to help people in need and then to assume that the people who will receive the checks will save rather than spend them. The proportion of households with children that have problems putting food on the table has jumped during the pandemic; it is hard to think those people will save their checks. Estimates of the marginal propensity to consume out of one-time checks in normal times are around 0.5; if the checks go largely to households that are liquidity or income constrained, the number is likely to be higher. Second, one way in which households might indeed save is by paying back rent due. The proportion of late rent payments has also substantially increased in 2020. If renters do this, they themselves do indeed save (they decrease their debt), but the rent goes to their landlords, who are likely to spend a good part of it.

A detailed analysis of the multipliers associated with the various dimensions of the program under current conditions is beyond my capacity. A useful exercise, however, is to look at the different elements of the $1.9 trillion program and use the multipliers given in the Council of Economic Advisers (CEA) 2014 report, table 3-5 (realizing that the conditions may be different today from what they were then), to see what they imply for aggregate demand.

The table below reports the results of this exercise. The first column of the table gives the different components of the program (in billions of dollars), the next three columns give the CEA best guesses of the associated multipliers and the CBO estimates of high and low values for the different multipliers, and the last three columns give the implied effects of the program on aggregate demand. (I thank Jason Furman, who is currently doing a more careful analysis of multipliers and aggregate demand, for his help on constructing this table.)

In short, multipliers are genuinely uncertain, especially in the current environment. But I have a hard time seeing the case for an overall average multiplier of anything close to 0.3.

Those who defend the size of the package argue that even if substantial overheating were to occur, it would not lead to high inflation and thus would not require the Fed to increase interest rates dramatically.

Indeed, the current estimates of the Phillips curve—which shows the inverse relation between the rates of inflation and unemployment—do not yield particularly worrisome results. Suppose for the sake of argument that the stimulus leads to a positive output gap, so an excess of actual output over potential output, of 5 percent. Using Okun’s law relating the change in the unemployment rate to GDP growth (which, these days, implies that a 1 percent decrease in output leads to an increase in the unemployment rate of roughly 0.5 percent), this 5 percent output gap would imply an unemployment rate about 2.5 percentage points below the natural rate. Thus, if we take the natural rate to be around 4 percent, the unemployment rate would be 1.5 percent. Assuming that inflation expectations were not deanchored, and thus did not respond to actual inflation, and assuming an effect on inflation of about 0.2 percent for every 1 percentage point decrease in the unemployment rate (roughly the current regression coefficient in my own regressions), inflation would increase by 0.5 percent, hardly something to lose sleep over. Indeed, such an increase would be desirable, given the Fed's long-standing aim to overshoot its 2 percent inflation target. Even taking larger estimates of the slope coefficients, such as those around 0.5 derived by Emi Nakamura et al., the increase in inflation would be only around 1.25 percent, not a catastrophic increase.

The issue is whether the current relation between inflation and unemployment would hold, and there are good reasons to worry. The history of the Phillips curve is one of shifts, largely due to the adjustment of expectations of inflation to actual inflation. True, expectations have been extremely sticky for a long time, apparently not reacting to movements in actual inflation. But, with such overheating, expectations might well deanchor. If they do, the increase in inflation could be much stronger.

A relevant comparison here is what happened in the 1960s, shown in the figure below. From 1961 to 1967, the Kennedy and Johnson administrations ran the economy above potential, leading to a steady decrease in the unemployment rate down to less than 4 percent. Inflation increased but not very much, from 1 percent to just below 3 percent, suggesting to many a permanent trade-off between inflation and unemployment. In 1967, however, inflation expectations started adjusting, and by 1969, inflation had increased to close to 6 percent and was then seen as a major issue. Fiscal and monetary policies tightened, leading to a recession from the end of 1969 to the end of 1970. 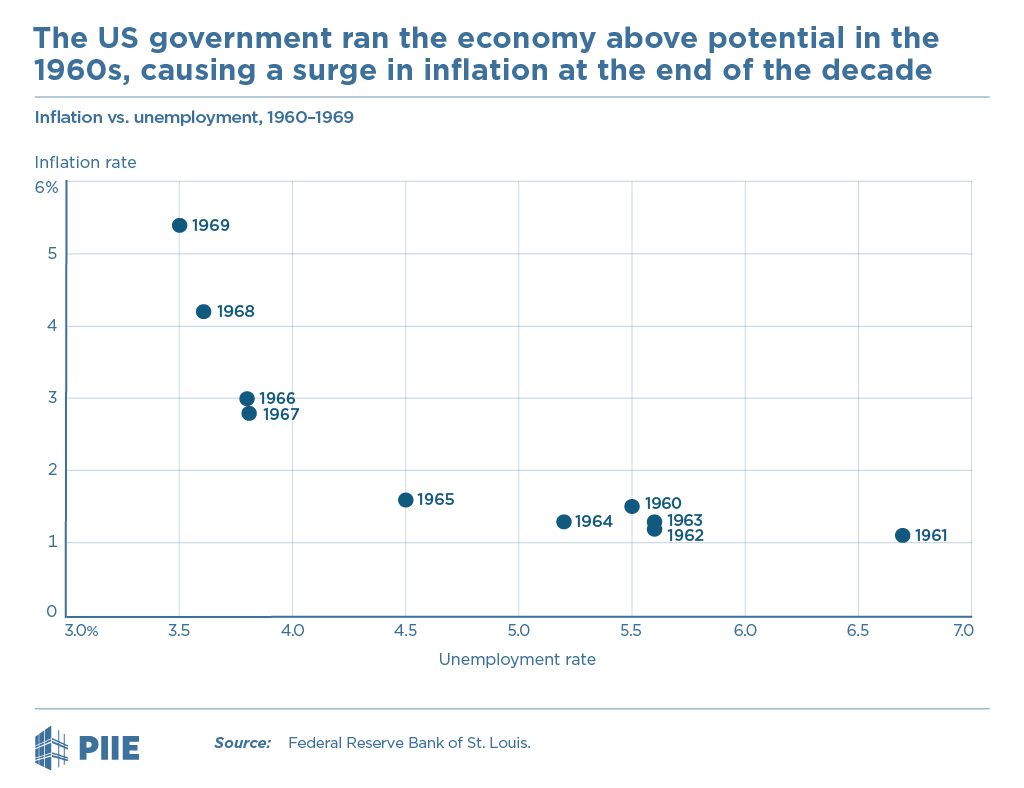 If inflation were to take off, there would be two scenarios: one in which the Fed would let inflation increase, perhaps substantially, and another—more likely—in which the Fed would tighten monetary policy, perhaps again substantially. Neither of these two scenarios is ideal. In the first, inflation expectations would likely become deanchored, cancelling one of the major accomplishments of monetary policy in the last 20 years and making monetary policy more difficult to use in the future. In the second, the increase in interest rates might have to be very large, leading to problems in financial markets. I would rather not go there.

There are many other relevant aspects to the discussion over the Biden administration's proposal. There are the political realities: a window of opportunity that may close in the future, the advantage of a hot economy during the midterm election season, the notion that sending Americans anything less than $1,400 dollar checks would be reneging on a promise; and there are other economic issues I have not discussed: what private demand would have been in the absence of the package, the timing of state and local government spending, the room the stimulus leaves for an infrastructure program, the ability of the Fed to control incipient inflation, and so on. All these issues are relevant and need to be discussed. In the end, if the full package passes, it may be that everything turns out fine, but this is not my central scenario.

Inflation fears and the Biden stimulus: Look to the Korean War, not Vietnam

Overheating debate: Why not in Japan?