Does Germany’s Business Climate Live Up to Its Reputation?

At a time when calls for structural and labor reform are echoing throughout Europe, Germany has maintained a reputation for fostering a business-friendly investment climate. This reputation results partly from the structural reforms undertaken in the early 2000s. Recent evidence from the World Bank's Ease of Doing Business Index indicates, however, that improvements in Germany's business environment have stalled and even deteriorated, and some aspects are below euro area averages.

According to EY's 2014 Europe Attractiveness Survey [pdf], Germany was voted as the most attractive foreign direct investment (FDI) destination in Western Europe, receiving 40 percent of the votes of all company respondents. The country differences in investor sentiment do not follow a core-periphery division, either: Spain, Italy, and Ireland received scores close to the Netherlands, Switzerland, and Belgium (between 1 and 3 percent each, respectively). In terms of actual investment projects in Germany, the United States contributed significantly: 142 of the 701 FDI projects in Germany in 2013 came from American companies (table 1).

Germany has not always enjoyed such a positive reputation. Conjuring the image of an extremely irritating traffic jam, reformstau (reform blockage/gridlock) was a popular word in the late 1990s that characterized the German economy at that time. The Hartz labor market reforms implemented by the government of Chancellor Gerhard Schroeder between 2003 and 2005 accelerated the German economy by removing the economic traffic blockages. The comprehensiveness of the reforms [pdf] didn't just raise productivity and employment levels but also minimized inequality through creating broad-based employment growth and supplemental job opportunities that were previously unavailable. The World Bank's Doing Business Index in 2006 called Germany the world's top labor market reformer . No improvement in Germany's business reputation occurred over last year, however. Its standing remains either unchanged or fell in each of the key indicators of the World Bank's 2015 Ease of Doing Business Index (figure 1). The largest noticeable declines are in starting a new business and registering property.

The cost of starting a business increased because of the imposition of higher notary fees through the Act on Modernization of Cost Rules . The number of procedures and the number of days required to start a business (9 steps and 15 days) are both higher than the euro area average (5 steps and 11 days, respectively). Germany's rank for starting a new business therefore fell this year to 114th in the world. 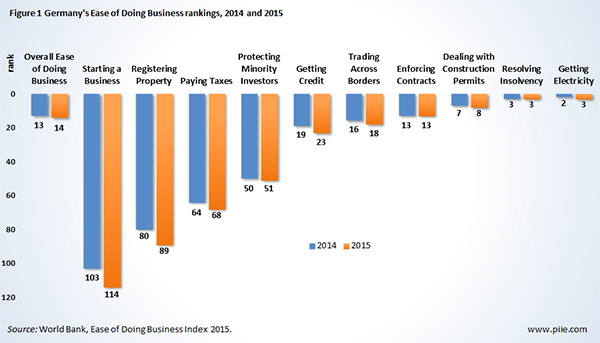 Registering property also became more expensive, with the real estate transfer tax increasing from 5 percent to 6 percent of the purchase price since last year. The number of days required to register property takes 40 days in Germany, which is much higher than the euro area average of 26 days. For these reasons Germany's rank for registering property fell in 2015 to 89th in the world.

Germany undoubtedly still has strengths that businesses find attractive. Its vocational education and training (VET) system not only creates a highly skilled workforce at home but is also actively exported abroad for companies lacking adequate training institutions in their host countries. The flexibility of Germany's commercial innovation systems via legacy resources and the richness of their industrial ecosystems are tremendous strengths that can be leveraged by foreign companies as well.

These strengths mask some of the weaknesses revealed by Germany's performance in the 2015 Ease of Doing Business Index. Falling from 13th place to 14th place is not a big deal for casual observers, but scoring 114th out of 189 countries and taking two weeks longer to register property compared to your neighbors (40 days versus 26 days) point to deeper structural issues that are in place. Ignoring minor symptoms naturally happens when one is relatively healthy. But barely-noticed deficiencies can still build up over time and erode an economy's competitiveness.

Improving Germany's business investment climate would boost longer-term competitiveness by bringing additional private investment into an economy that is already dealing with a serious investment gap. Marcel Fratzscher from the Deutsches Institut fuer Wirtschaftsforschung (German Institute for Economic Research) estimates this gap to be approximately $95 billion to $106 billion annually. It would also counter criticism that Chancellor Angela Merkel's government is comparatively weak in implementing serious structural reform in her own country such as those accomplished by her predecessor, while insisting that other euro area countries remove reformstaus of their own.

Germany's championship reputation will become increasingly difficult to maintain if it pushes reforms aside for another day.

France, Germany, and Italy press ahead to spur their economies

The Wirecard debacle calls for a rethink of EU, not just German, financial reporting supervision