After a long period of debate and equivocation, the European Central Bank (ECB) announced a program of bond purchases known as quantitative easing (QE) in January, followed by details of its implementation in March. The rationale for QE was to counter the euro area's insufficient demand and live up to the ECB's price stability mandate. It was time to ease—in fact it was long overdue. The program, when it was announced, entailed large, open-ended actions, conditioned to reaching an inflation objective of at least 2 percent (see the discussion)—a program that was as close to best practices as possible.

Opponents of QE had argued not only that it was unnecessary but also that it would not do much. Long-term rates are already very low, these skeptics said, adding that because the euro area is more bank centric than the United States and the United Kingdom, the portfolio balance channel would not have as much impact as in those countries.

The reality is that QE, as predicted, is working well, with most of its impact already being priced in. The channels of transmission are the standard ones:

In addition, QE is helping to support an economy that has hit bottom and is ready to rebound—thus QE is likely to benefit from tailwinds. Recent indicators, such as the Purchasing Managers Index, have improved in the last few months, on the heels of lower yields, a weaker currency, and lower oil prices. The asset quality review and stress tests of banks' solvency have erased the doubts about the health of the European banking sector—which, supported by QE, has led to a very welcome decline in private lending rates in the periphery. The euro area periphery (except for Greece) is now benefiting from what have been painful but needed extensive fiscal adjustments and reforms. In addition, euro area policies are now more supportive of growth, as we recommended in Posen and Ubide (2014) . Not surprisingly, forecasts for euro area growth are being revised upwards.

Here are updates for two of the figures used to assess the ECB's policies and the success of QE. Figure 1 shows the evolution of long-term real interest rates in the euro area (a GDP-weighted basket of euro area countries' 10-year rates deflated by 10-year inflation swaps) versus in the United States and the United Kingdom for comparison. It shows that, for the first time, euro area long-term real rates (purple line) are lower than in the United States and have finally become negative—as the Fed and the Bank of England managed to do during their QE programs. This will provide much needed support to euro area growth. 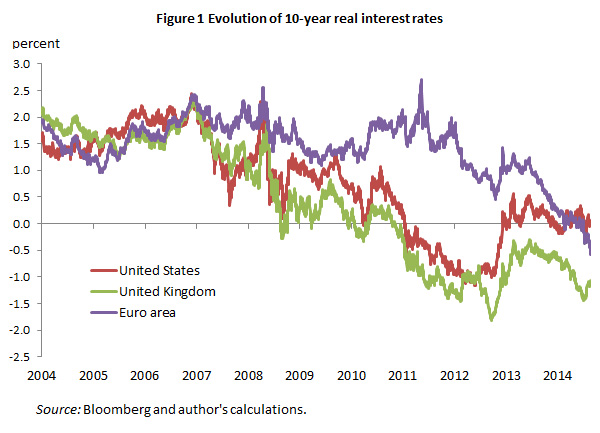 Figure 2 shows the evolution of the term structure of European inflation swaps. The red line shows the term structure of inflation when the ECB was fully credible, in 2005–06. The light blue line shows it as of early 2014, when doubts about the credibility of the ECB were starting to appear (see my Policy Brief ). The decline towards the purple line, (when ECB President Mario Draghi gave the speech at Jackson Hole that started the process of preparation for QE) and then towards the green line (right before the ECB's January meeting when QE was announced) shows the deterioration of the inflation outlook. By early January 2015, the market was pricing clear near term deflationary risks and was forecasting an annual inflation rate of barely 1 percent over nine years. The ECB's price stability credibility was in tatters. 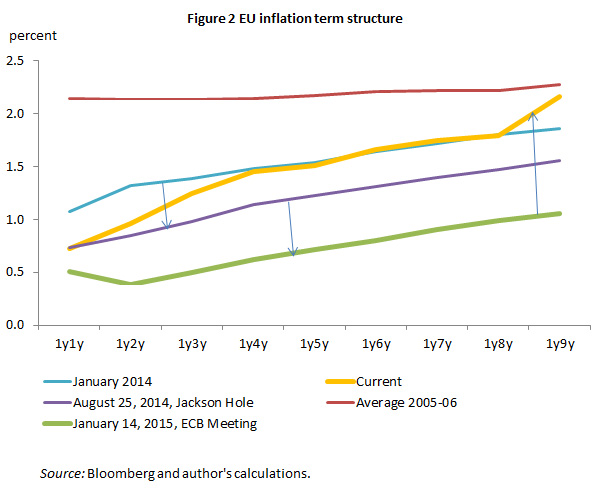 The yellow line shows the current inflation term structure. Quantitative easing has erased most of the near term deflationary risks and has restored the ECB's long-term price stability credibility—the 1-year inflation nine years into the future is almost back to normal levels. There is still work to do, however. The markets still expect a long period of well below target inflation. The ECB's forecast of inflation at 1.8 percent in 2017 looks optimistic in this regard—the figure suggests markets are expecting an inflation rate of no more than 1.25 percent. But at least the deterioration in inflation expectations has been arrested, and markets are now moving in the right direction.

This should not be a reason for complacency. The last two years have shown how easily price stability credibility can be damaged. The ECB must stand by its commitment and continue doing QE until it can credibly and sustainably forecast inflation at 2 percent in 2 to 3 years, regardless of how big its balance sheet becomes. This is good progress, and the ECB should be congratulated for a good first step in the right direction. But we are not there yet.