Countries around the world are likely to see continued economic recovery this year and next, but the pace of growth will be tempered by headwinds from the Delta variant and supply chain problems and bottlenecks. The world economy is on track to expand 5.6 percent in 2021 and a further 4.9 percent in 2022.

As figure 1 shows, the large advanced economies are poised for brisk increases in economic activity in 2021 and 2022 even though the Delta variant and frictions related to reopening have dampened the outlook relative to the hopes of early summer​. The United States is seeing the fastest economic recovery of these major economies because of its early start on vaccinations and vigorous fiscal response to the pandemic. Solid fundamentals in Europe and the United Kingdom should support further growth in those countries as supply constraints ease, and Japan's economic recovery will be bolstered by its stepped-up pace of vaccinations and fiscal stimulus.

As has been the case since the beginning of the pandemic, growth prospects in China have been the brightest among the large emerging-market economies. India is recovering briskly but has much ground to make up after a considerable decline in economic activity last year. Further economic recovery in Russia is likely despite interest rate hikes, given the government's plans to increase spending. Brazil's economy, while outperforming expectations this year, is likely to see much slower growth next year amid political turbulence related to the upcoming elections. 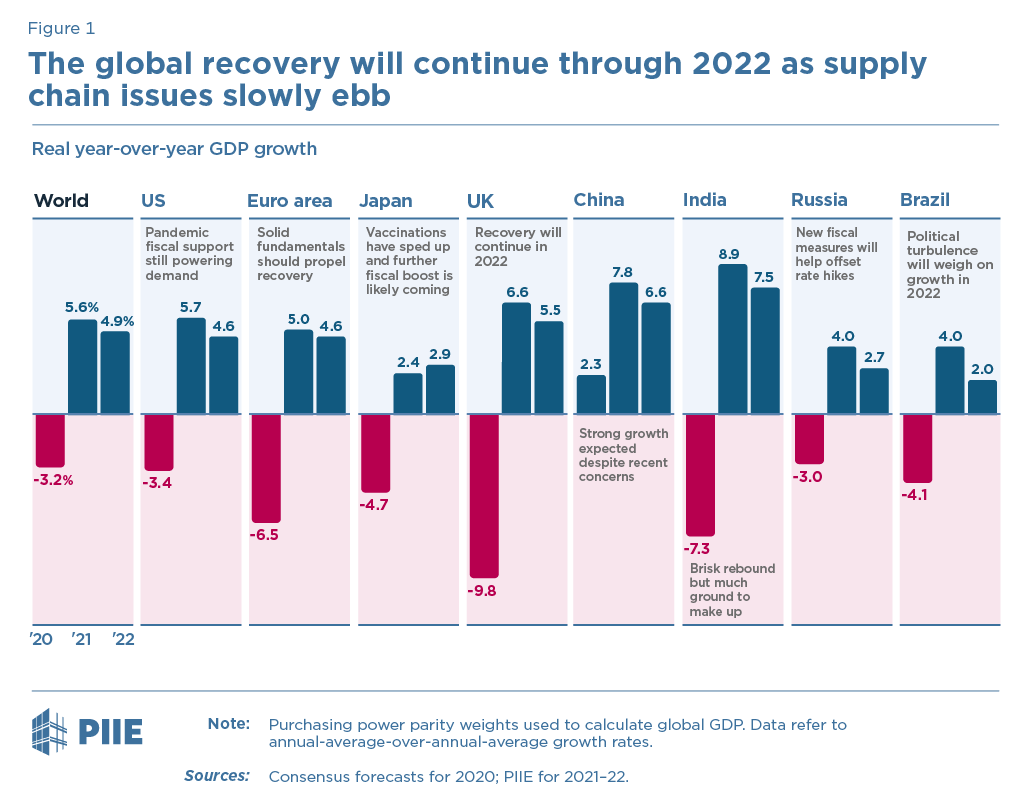 Real US GDP surged in the first half of 2021, increasing at an average annual pace of 6.5 percent. The third quarter saw a lull in economic growth as the rising prevalence of the Delta variant has damped demand in some sectors, supply chain breakdowns and bottlenecks have been weighing on production, and some would-be workers have been reluctant to reenter the labor force.

Looking ahead, five key economic factors are likely to shape the outlook in the United States:

1. Households' financial capacity to keep spending​ will underpin demand for goods and services. Despite massive job loss in 2020, government income support and pandemic-constrained spending have left most households with larger-than-usual financial buffers (figure 2), and booming asset prices have benefited some households as well. All told, consumer demand is likely to remain strong, albeit tempered in the near term by the Delta variant. 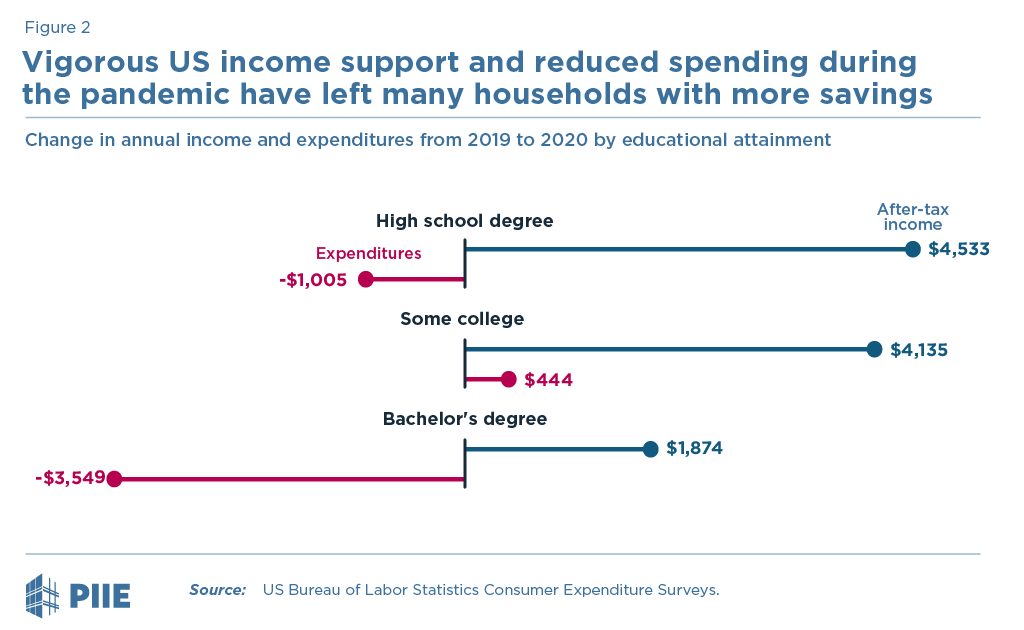 2. Supply chain problems and bottlenecks have been much more significant than most analysts expected earlier this year (figure 3). As a result, growth has been slower and inflation higher than anticipated. Recent developments suggest that these supply-side obstacles to economic expansion will ebb only slowly, remaining a hindrance to growth through 2022. 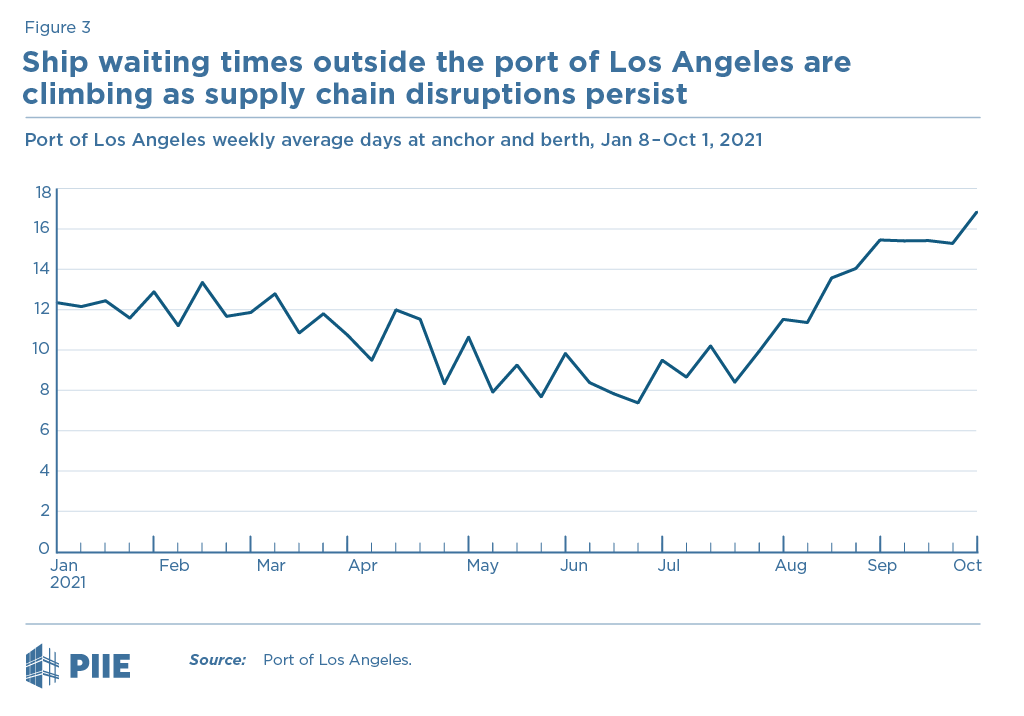 3. Labor demand and supply will continue to evolve in ways that are consequential for both output and inflation. Demand for less-skilled workers has been strong recently, but restructuring, sectoral shifts, and accelerating automation spurred by the pandemic will hinder the further recovery of low-skilled jobs to an extent that is still unclear (figure 4). Meanwhile, the hesitation of would-be workers to return to the labor force has restrained labor supply, but that reluctance will likely dissipate for working-age adults as their accumulated savings are depleted. 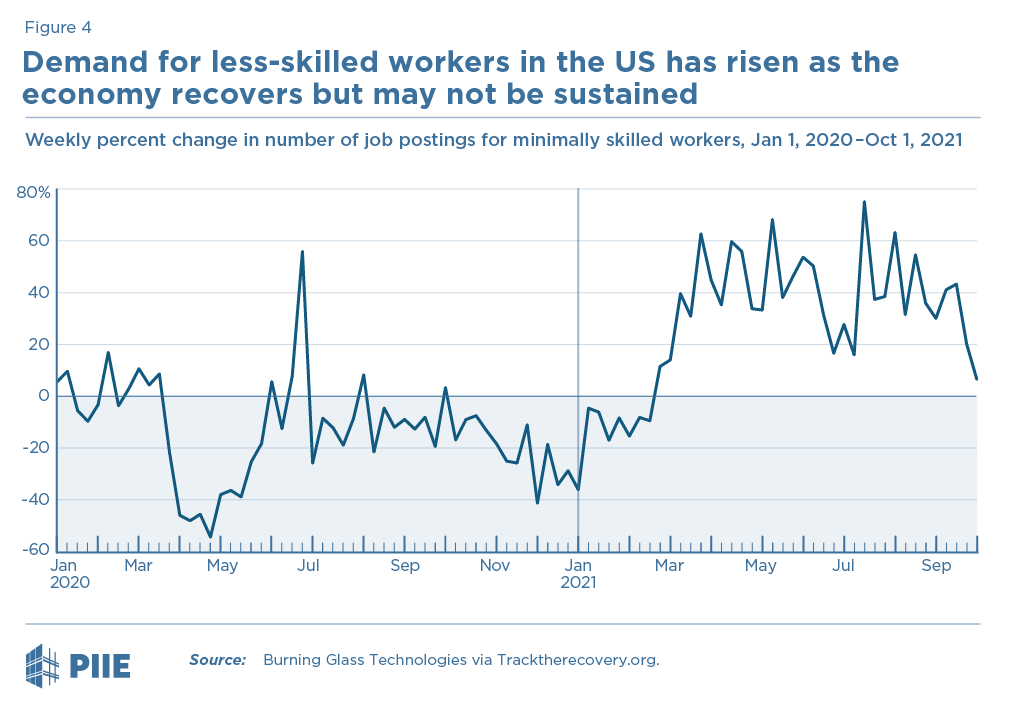 4. The outcome of the current budget debates in Washington will determine the extent to which new measures offset the waning of earlier fiscal stimulus. The offset will most likely be only partial, because the big spending numbers being discussed will probably be reduced and drawn out over a number of years in the negotiations process. Increased spending will also likely be partly offset by tax increases.

5. The interaction between inflation expectations, wage pressures and monetary policy will have a crucial effect on economic growth and inflation next year and beyond. Supply-side frictions and pent-up demand have pushed up 12-month core personal consumption expenditure (PCE) inflation to 3.6 percent​, its highest mark since the early 1990s. Inflation indexes that exclude price changes that are outliers are notably lower than core inflation, and measures of expected inflation and wage growth do not (yet) signal sustained high inflation. Still, inflation is likely to be higher than the current Federal Open Market Committee (FOMC) consensus, and therefore policy tightening is likely to be a little more aggressive as well.

Taking these considerations together, my Fall 2021 Global Economic Prospects forecast calls for US GDP to advance 5.7 percent this year and an additional 4.6 percent in 2022. Core US PCE inflation is projected to reach nearly 4 percent at the end of this year and then subside to 2.5 percent by the end of 2022. The US unemployment rate is on track to decline to 4.8 percent in the fourth quarter of 2021 and to end 2022 at 4 percent.

Unfortunately for economic forecasters, there are no similar episodes in recent history to guide current projections. Much could go wrong for the global economy, including emergence of new virus variants, further supply shocks, and disruptions to financial markets caused by central bank tightening or other factors​. One especially important risk is that markets could be surprised by the extent of policy tightening—particularly if central banks have to pivot more abruptly—and the "everything bubble" deflates, perhaps suddenly.

An uneven global rebound will challenge emerging-market and developing economies