How to improve the measurement of housing costs in the CPI

New data could be used to improve the measurement of housing costs in the consumer price index, or CPI. Ordinarily, the housing-related components of the CPI are among the stodgiest, least-noticed elements of the index. But they constitute an astonishing 31 percent of the overall index and nearly 40 percent of the version of the index that excludes food and energy prices. There are strong indications that the pace of inflation in the housing components is set to roughly double over the next nine months or so. Under current methodology, that acceleration will surface in the CPI later than it should, with important consequences for households, businesses, and decisionmakers throughout the economy.

A panel convened by the National Academies of Sciences, Engineering, and Medicine is studying ways that the CPI could be improved—especially by harnessing the torrent of data that has become available in the 20 years since the National Academies last reviewed the CPI. This panel should recommend that the Bureau of Labor Statistics explore the feasibility of modernizing the methods it uses to estimate housing costs in the CPI, by bringing to bear new information about rents. The result would be a CPI that represents changes in rents on a much-closer-to-real-time basis and better reflects the housing experiences of the American public. No other components of the CPI present such a meaningful opportunity for improvement by this means.

A crash course in how the sausage is made

The CPI is constructed by the Bureau of Labor Statistics (BLS)—an independent, nonpartisan element of the Department of Labor. The BLS has long employed some of the best minds in the science of economic measurement. It publishes the CPI every month, based on tens of thousands of price measurements, weighted to be representative for the most part of the out-of-pocket spending of the urban population in the United States.[1]

Housing costs are represented in the CPI by two main components. One of these components—called "rent of primary residence"—aims to measure the monthly outlays of people who rent their dwellings. To accomplish this goal, the BLS draws a sample of about 48,000 rental units. It divides those units into six panels, each consisting of about 8,000 units. Because rents generally change infrequently, the BLS reprices the rents paid on these units only once every six months.

An aspect of current methodology that is surprising even to many veterans of the CPI is that the BLS sets the one-month change in this component of the CPI equal to one-sixth of the six-month change in rents observed in one of the six panels. Over the course of six months, they rotate through the six panels. The BLS uses this approach for valid technical reasons, but it has important practical implications, some good, some not so good.

Two advantages of this approach are the following:

But two disadvantages are these:

The index that aims to measure the housing costs of renters constituted 7.6 percent of the overall CPI in October 2021.

The second main housing-related component of the CPI captures changes in the cost of living for owner-occupiers. The methodology here is similar to the one used for renters. In particular, the BLS uses the same structure of six rotating panels. It starts from the same rents that were used to construct the first CPI component but assigns different weights to them -- increasing the weights on units that are more representative of the owner-occupied housing stock and decreasing the weights on units that are less representative. The result is a component referred to in the trade as "owners' equivalent rent," or OER for short.[3] OER constituted 23.5 percent of the overall CPI in October 2021. Together, therefore, these two housing-related components made up 31.1 percent of the overall index in October.[4]

There is a more accurate way to measure housing costs

Many private firms collect data about rents paid on residential properties, including Yardi Matrix, CoStar, RealPage, CoreLogic, Zillow, and Equifax. Several of the products offered by these firms aim to measure "asking rents"—that is, rents that would be charged of new tenants. Some firms, however, operate as rent-payment processing platforms. As a result, they can measure changes in rents paid on all occupied units rather than only rents paid by new occupants—and thus have essentially the same measurement objective as the BLS.[5] For example, Yardi Matrix states that it "processes monthly rental payments for 8 million apartments."[6] To be sure, clients of a commercial platform cannot be confused with a carefully constructed random sample of all apartment units. But the BLS could explore how close it could come to achieving universal coverage by combining multiple data providers and could assess the extent to which rental units controlled by clients of payment platforms differ from other rental units.

Most of these data resources focus on informing the decisions of individuals and organizations looking to invest in residential real estate. Less is known about rents paid on dwellings that are not likely to become available for purchase by investors—especially those owned in small numbers by individuals. However, the Urban Institute has recently been using data from Avail, "an online rental property management platform for independent mom-and-pop landlords," to track rents paid on such properties.[7]

If a new paradigm along these lines could be built, it would provide a timelier representation of rent changes. It should also allow a vast expansion of the rental base the BLS draws upon to construct the indexes.

A surge in housing cost inflation is coming

Many indexes of asking rents have exploded in the past 12 months, as reported by Jason Furman in a recent Peterson Institute paper.[8] These indexes strongly suggest that the two key CPI rent components will accelerate over the next year or so. For example, after suitable smoothing, the Yardi index of multifamily rents correlates well with the CPI for "rent of primary residence." A scaled version of the Yardi index catches the deceleration in rents through the middle of 2021 as well as the subsequent acceleration. This model anticipates that, over the next year or so, the pace of increase in the CPI for rent of primary residence will move up to about 7 percent (see figure below). 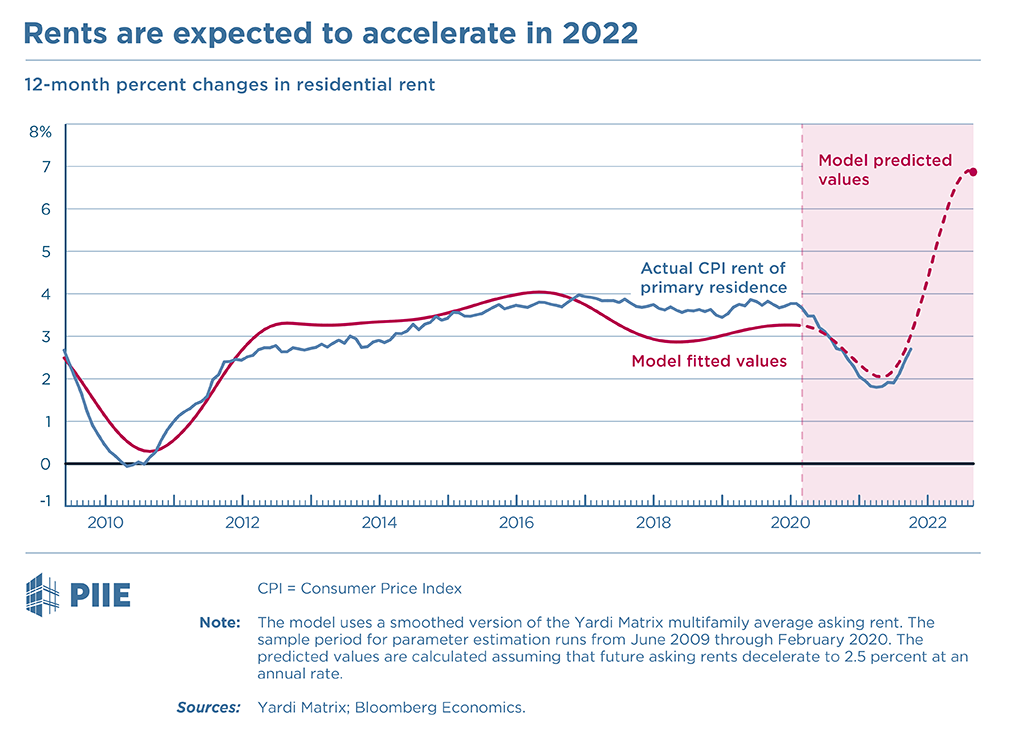 A similar exercise aimed at predicting OER points to increases in that component of the CPI of about 6 percent around the middle of next year.

These increases are quantitatively important: If the CPI rent indexes accelerate from 3 percent to 6 percent over the next year, they will contribute an additional 0.9 percentage point to topline CPI growth over that period (31 percent of 3 percentage points) and an additional 1.2 percentage points to core CPI growth (40 percent of 3 percentage points). Under current methodology, this contribution will manifest more slowly in the official index than it will be experienced on the ground by flesh-and-blood renters. Policymakers, investors, and others who are unaware of the deep mechanics of how the CPI is constructed may be slower to take action in response to the incoming information than they would be if it were presented on a more timely basis.

1. One exception is the representation of the housing costs of people who own their dwellings. In that case, the BLS imputes a monthly expenditure amount rather than basing the index on cash flows.

2. Some of those 48 million units are located in nonurban areas, and so are out of scope for the CPI, which aims to measure changes in the cost of living experienced by urban consumers. The urban population covered by the CPI-U (the version that is more important to the Federal Reserve and that garners the larger amount of attention) constitutes about 87 percent of the US population. See BLS Frequently Asked Questions.

4. For the latest relative importance weights in the CPI, see the BLS's monthly press release.

5. The BLS measurement objective is appropriate given the goal of the CPI to represent changes in the cost of living of the entire urban population of the United States. Most of that population—even the subset that rents rather than owns—does not experience whatever rent changes newly occupying tenants are being asked to pay.

6. If all 8 million of those apartment units are in properties owned by for-profit businesses, Yardi would see the rents paid on more than one-third of such units.

7. According to the Pew Research Center, the Census Bureau estimated that in 2018, for-profit businesses owned 45 percent of all rental units. The remainder were owned by individuals or entities such as nonprofits or housing cooperative organizations.