Piketty's Place in the Top 1 Percent

What about inequality in professional recognition? Alas, the laws of inequality apply with equal force in that realm. Think of the Nobel laureates like the physiologists James Watson, Francis Crick, and the physicist Peter Higgs who basked in glory while many of their codiscoverers lingered in anonymity. Right alongside is Piketty himself.

Piketty's 685-page book is an edifice built on  income and wealth data amassed by many others, providing a foundation for Piketty's claim to fame. Acknowledgements in Capital give special mention to Anthony Atkinson, Piketty's mentor, Emmanuel Saez who did the hard labor mining US data, and two French coauthors, Gilles Postel-Vinay and Jean-Laurent Rosenthal who wrote early articles with Piketty on Parisian wealth. The book's acknowledgements page lists 22 doctoral students and young scholars who gathered data from multiple countries and sources, and it singles out a database expert, a collaborative researcher on fiscal and taxation policy, and a specialist on capital/income ratios for special recognition from the pool of young scholars.

How do these other scholars, some of them almost codiscoverers, fare in the professional recognition department? Not well.

Figure 1 tells the story using Google citations based on a search of the full name along with the title Capital in the Twenty-First Century.2 The number of entries for Piketty is 37 million, while the number for Atkinson is 57,200. Saez comes in third with 51,300. After that, citations drop dramatically—indeed, some of the data beavers are virtually anonymous. In fact, Piketty garners a remarkable 99.5 percent of the citations for those who contributed to Capital. Measured by the Gini coefficient—where zero represents perfect equality and one represents perfect inequality—the coefficient for the group of Piketty scholars is 0.96.

Piketty notes that income and wealth inequality have increased since the Great Depression and the Second World War. Moreover he offers a simple theory why inequality will inexorably rise in decades ahead (summarized as r>g, r being the rate of return to capital and g being the rate of economic growth). Indeed,  the claim and the theory are the most novel aspects of his book. Chris Giles of the Financial Times has strongly challenged the wealth part of Piketty's empirical claim.3 Whatever the statistical truth about rising inequality of wealth, a comparison between two pairs of left-leaning economists remarkably confirms the rising inequality of professional recognition. According to Google citations, Karl Marx outranks Friedrich Engels by 6 to 1 (5 million vs. 867,000),4 but Thomas Piketty outranks Emmanuel Saez by 727 to l (37 million vs. 51,300)!

Observers may regard inequality of professional recognition as akin to inequality of natural beauty—not something that society can or should do much about. Moreover Piketty's admirers can say perseverance and brilliance justify his outsized recognition. But admirers of Larry Ellison, CEO of Oracle, can name similar traits to justify his outsized salary of $77 million in 2013. If, at some distant future day, society chooses to levy universal income and wealth taxes, as Piketty proposes, no doubt it can also apply egalitarian standards to Nobel prizes and other insignia of professional recognition.

Until that distant future arrives, Piketty himself can do something about life's unfairness. By the end of April 2014, some 50,000 copies of Capital had sold (with estimates ranging as high as 80,000, not including ebook sales estimated to be about 10,000), at a price of around $40 per hardcover copy.5 Assuming book sales are roughly double by now, and assuming a royalty of 15 percent, Piketty will soon pocket $600,000, with more on the way. Piketty recommends an income tax rate of 80 percent on earnings above $250,000. In keeping with his sentiments, and to rectify the gross inequality of professional recognition, surely Piketty will share at least $280,000 of newfound riches with his fellow scholars! 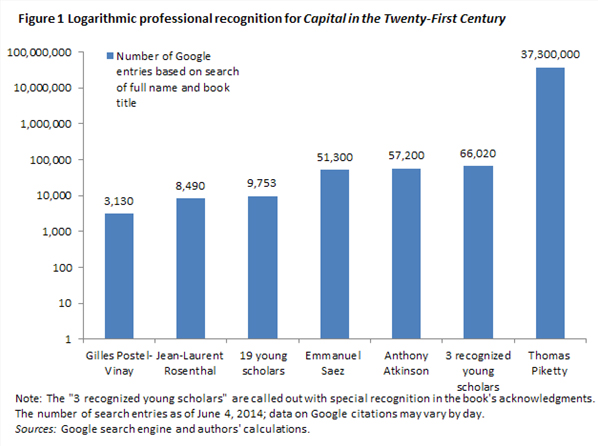 2. This is admittedly an imperfect measure of "citations," but it roughly estimates the recognition for contributing to the book. On a technical note, both search terms (full name and title) were Google searched in quotations to help weed out the number of unrelated searches.

4. In fact, a search of the economists' names, coupled with the title Das Kapital, adjusts the proportion of citations between Marx and Engels to 4 to 1.