The labor market improvement accelerated in March 2021 as employers added 916,000 jobs, a very rapid pace but one that will need to be sustained in order to repair the economy. Overall the economy was 10 million jobs below its pre-pandemic trend, and if the March pace of jobs gains is sustained, it will take another 14 months to close the jobs gap.

Our estimate of the realistic unemployment rate, which adjusts for a misclassification error and the unusually large withdrawal of millions of people from the workforce, fell to 7.8 percent (as compared with a high of 10.0 percent in the financial crisis). Another concept, the fixed participation rate unemployment rate, cited by Federal Reserve Chair Jerome Powell and Treasury Secretary Janet Yellen, was 9.1 percent; the comparable concept peaked at 11.8 percent in the financial crisis.

The headline unemployment rate was 6.0 percent in March, down slightly from 6.2 percent in February. This concept works well in normal times but has had some deficiencies in the context of the pandemic. In response to these unique circumstances, we have been publishing monthly updates since June 2020 tracking what we call the "realistic unemployment rate" as shown in figure 1. 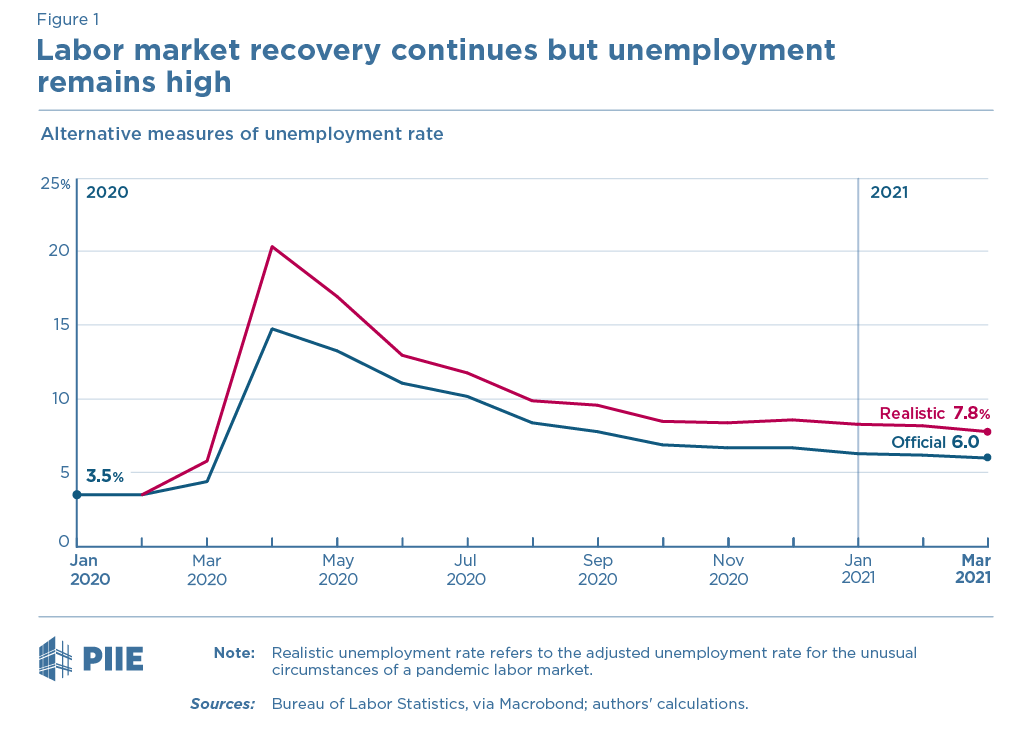 As the unemployment rate remains elevated, the employment-population ratio is 3.3 percentage points below its pre-pandemic value 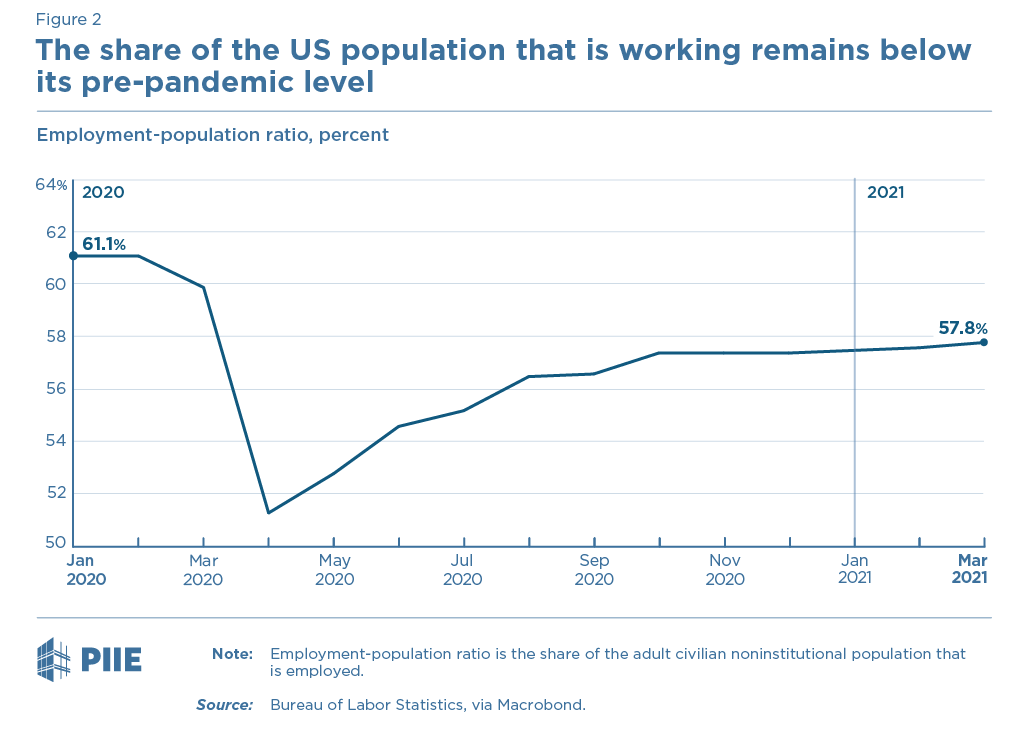 Overall employment is 10 million jobs, or 7 percent, below its pre-crisis trend—and at the March pace it will take 14 months to close the gap

A total of 8 million jobs have been lost in the thirteen months since the economy's peak in February 2020. If the 2019 pace of job growth had continued, the economy would have added about 2 million jobs over this period. As a result, total employment was 10 million, or 7 percent, short of where it was expected to be in March.

The shortfall in employment is larger than the shortfall in GDP. For the first quarter as a whole, employment was 7 percent short of trend. At the same time, based on the latest IHS Markit tracking estimates, GDP was about 4.0 percent short of trend in the first quarter. This disconnect appears to largely reflect the fact that workers with lower productivity have lost their jobs, reducing employment more than GDP. Over the coming year this process is likely to reverse.

The pace of job growth in March was extraordinary by normal standards but still would not be sufficient to return the US labor market to normalcy for 14 months, until May 2022 as shown in figure 3. 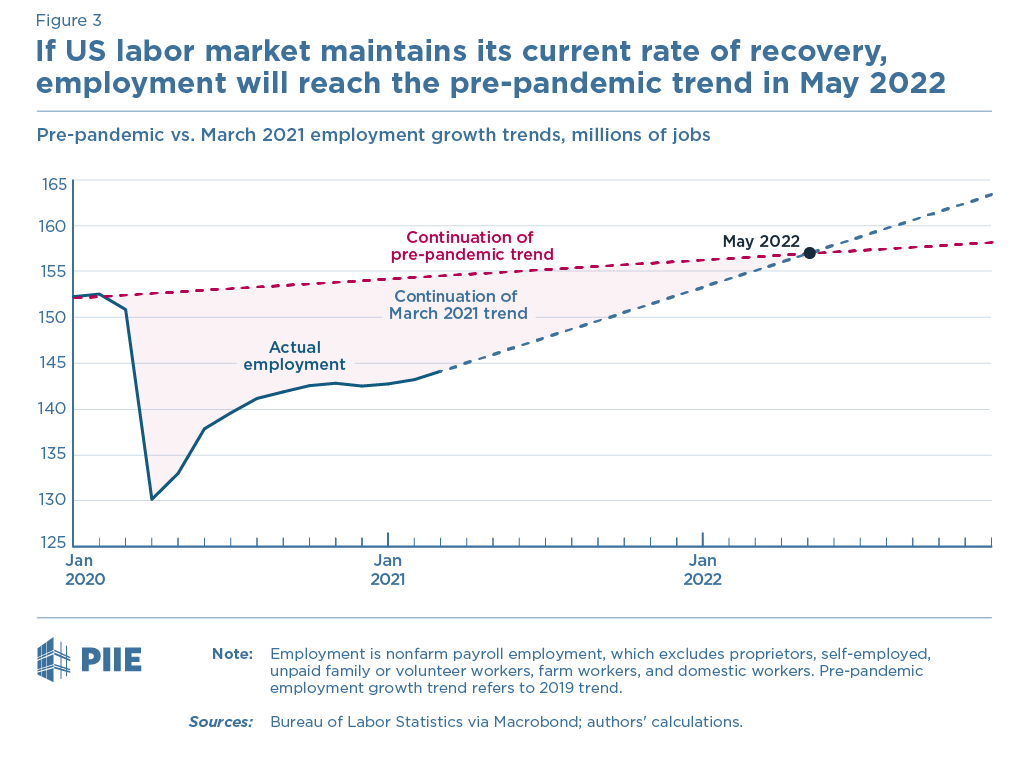 Understanding the data can help inform projections of the trajectory of labor market recovery. We saw an initial "partial bounce back" in the labor market in the late spring and summer of 2020, as the unemployment rate fell quickly at first as businesses reopened. Now we are in the midst of what appears to be another further bounce back as many economic activities are returning to pre-pandemic norms.

The prospects of the labor market over the next year will depend on the trajectory of the virus and how many people without jobs can quickly connect with their old jobs instead of undertaking the time-consuming process of finding a new job or even a job in a new industry. Virus cases have started to rise again even while deaths have generally fallen or levelled off—although widespread vaccination raises the prospect of normalization absent significant mutations. At the same time, the pace of job growth will need to pick up even further if the economy is to meet the widespread forecasts of something like a return to its full potential by the end of this year.

US workers are quitting jobs at historic rates, and many unemployed are not coming back despite record job openings