The US economy added 943,000 jobs in July, a noticeable pickup from the average of 563,000 jobs over the previous six months. This still leaves the economy 7.6 million jobs short of pre-pandemic projections. At the same time the unemployment rate fell to 5.4 percent (with even larger reductions in the Black and Hispanic/Latino unemployment rates) while labor force participation also improved. A range of other indicators also improved sharply including reductions in long-term unemployment and broader measures of labor underutilization such as the “realistic” unemployment rate (which adjusts for the unusually large reduction in labor force participation).

While the economy is still missing millions of jobs, the overall data is more consistent with a tight labor market in which demand for jobs was plentiful but supply remained constrained. Job openings and quits have both been at or near record levels and in July there were about 0.9 job seekers for every job opening, essentially as tight as the labor market was prior to the pandemic when the unemployment rate was considerably lower. Although wage growth moderated slightly in July it remained above previous trends.

Looking forward, given record job openings there is room for continued rapid job growth, particularly if the rate of unemployed workers taking jobs rises to more normal rates over time. The three big open questions continue to be: (1) what is the relative pace of demand and supply improvements in the labor market, an issue that will affect the pace of nominal wage growth and price growth, (2) will the economy be able to close the full 7.6 million jobs gap quickly or will the last few million jobs be more difficult because some people have permanently left the labor force as a result of the pandemic, and (3) how, if at all, will the rise of the delta strain affect these developments over the coming months?

The state of the labor market can be understood by looking at the set of indicators shown in the table.

The unemployment rate and the “realistic” unemployment rate, which adjusts for misclassification and the unusually large decline in the labor force participation rate, tell a similar story (figure 2). Both measures improved markedly in July, each falling by 0.5 percentage points, but remain well above the pre-pandemic level of unemployment. In total 2.1 million fewer people are in the labor force than would be expected given the overall state of the economy. This is consistent both with the still depressed labor force participation rate and employment-population ratio which are 1.3 and 2.4 percentage points below their respective pre-pandemic values (adjusted for demographic changes). 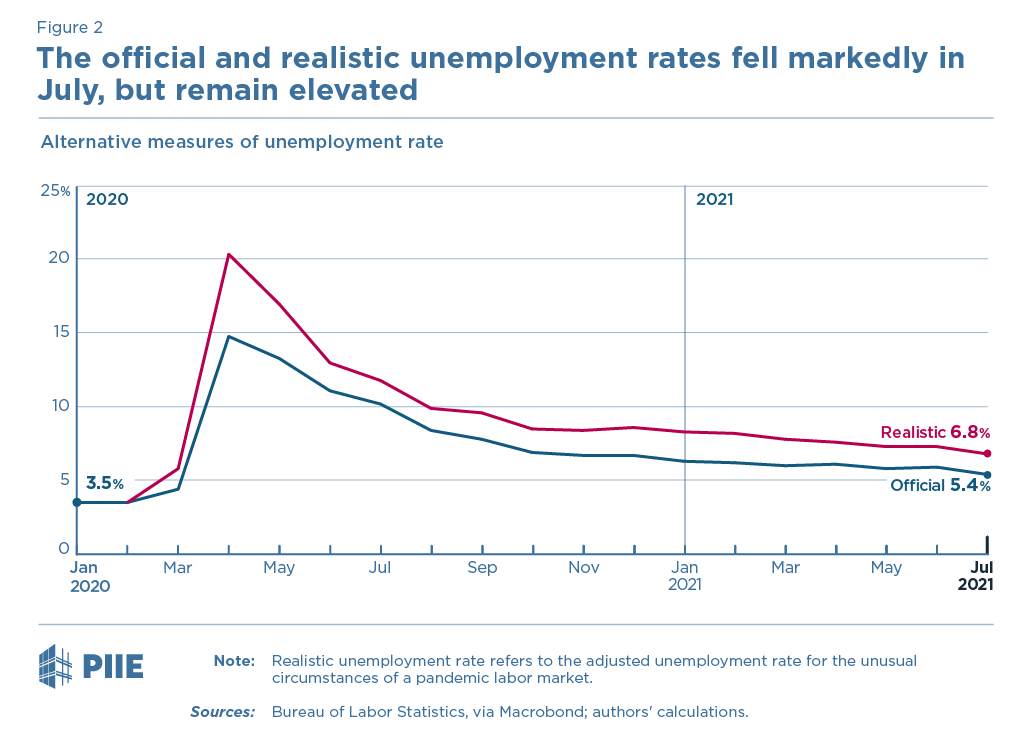 In recent months, job growth has been restrained by the lower-than-expected rate of unemployed workers transitioning into jobs. In the first six months of 2021, only about 23 percent of unemployed workers moved into jobs each month, well below the 29 to 34 percent one would have expected given the overall state of the labor market (figure 3). That shortfall is a big deal, potentially amounting to 500,000 fewer jobs a month. A number of factors may have been holding back transitions from unemployment to employment including the difficulty of putting a complex economy back together, continued fears of COVID, increasingly long-term unemployed workers, and enhanced unemployment insurance benefits in the roughly half of states that still had them in July.

The flip side of this is that with record job openings a small increase in the rate of people exiting unemployment for jobs would be sufficient to sustain continued strong job growth in the months ahead.

One sign of the tightness of labor markets is the fact that job openings and quits have reached record levels in recent months, showing both that jobs are plentiful and also that people have the confidence to quit their jobs knowing they will be able to find new ones.

At the same time, there were still an unusually high number of unemployed workers so that there were still 0.9 unemployed people for every job opening in July (or 1.1 adjusting for the unusual reduction in participation) as shown in figure 4, so in this sense the labor market still had somewhat more slack than it had just prior to the recession. 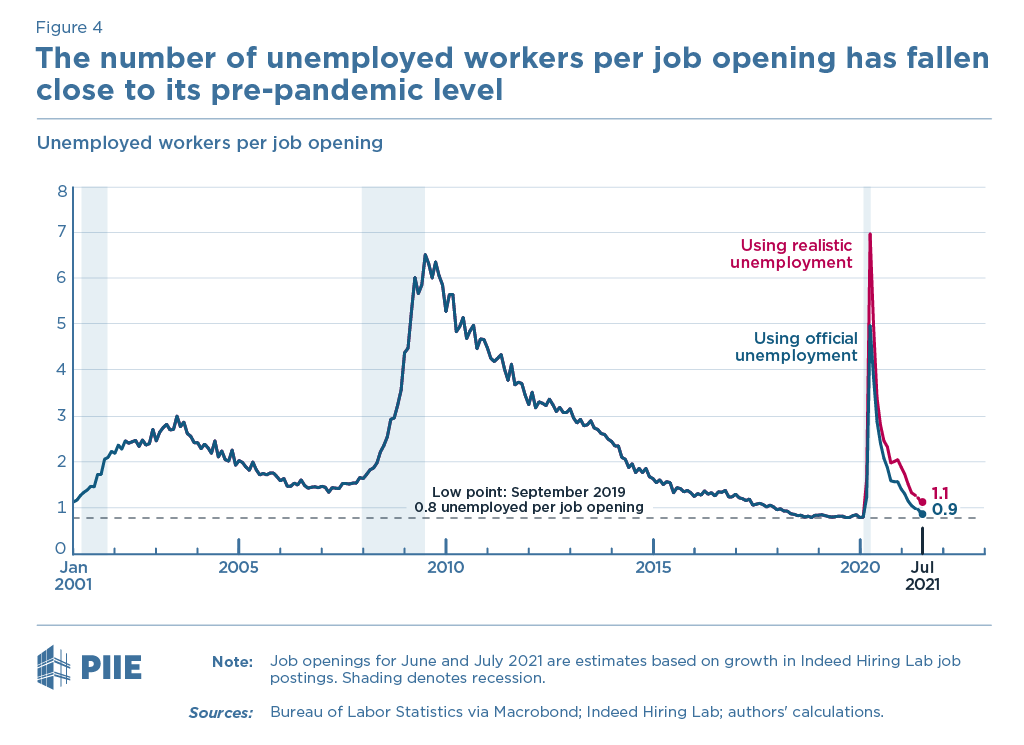 The best measure of the tightness of labor markets is wages. The pandemic period has been unusual in that very high unemployment did not result in any slower nominal wage growth for the workers who kept their jobs—instead wage growth continued at a relatively fast rate with the fastest wage growth for the bottom quartile of workers. Nevertheless, nominal compensation growth has not kept pace with inflation, so real compensation has fallen since prior to the pandemic. Wage growth in July was again above pre-pandemic averages but it has moderated from its pace in the last few months. Note that the headline numbers in this month’s report likely understates true wage growth in the economy because many of the workers rehired have been in leisure and hospitality and other lower-wage industries and as they re-enter the jobs numbers they drag down the average wage.

Much of the data for the July labor market reflects a period before the large increase in the COVID cases and hospitalizations. The rise of the delta strain could have more of an impact on the economy in the months ahead, although it is unclear just how large an impact—especially considering that certain high-frequency indicators, like mobility and restaurant reservations, do not appear to indicate a large change in consumer behavior in response to the latest COVID wave.

The most important solution to the continued large shortfalls in the labor market is time. Time for workers and employers to find the right match. Time for the extent of the virus to improve. And time for expanded unemployment benefits to expire or be replaced by more modest increases in the states that have not yet dropped them. Time will help with millions of jobs but it remains uncertain whether it will bring back all 8 million missing jobs or just a subset of them and how long this process will take.

The next many million jobs should be relatively easy to get back given the large number of openings and continued rapid economic growth. More difficult, will be the last several million jobs. Jobs may end up short of pre-pandemic trends if people have left the labor force for good (e.g., due to early retirement) or if other changes have permanently reduced labor demand (e.g., employers hiring fewer workers who are higher skill and higher paid). The hope is that all the jobs can be regained, productivity could rise to support wage increases and that continued high levels of demand could put the economy on a future path that is better than what was expected before the pandemic. Time will tell.