The US solar industry is justifiably concerned about the US government's hardening stance on China's human rights abuses in the Xinjiang Uyghur Autonomous Region (henceforth Xinjiang), a key supplier of polysilicon used for making the photovoltaic cells used in solar panels. In response, the industry is looking to third-party auditing and verification as a way of ensuring its supply chains aren't tainted by forced labor. Unfortunately, this approach is unlikely to be effective in China's repressive media and information environment.

The Biden administration recently banned imports of polysilicon-based products produced by several Chinese firms over allegations of their use of forced labor in Xinjiang. As Marcus Noland and I argue in our recent PIIE Policy Brief, Xinjiang is the locus of one of the largest campaigns of government-inflicted human rights abuses in the world, including forced labor, which has infected the supply chains of companies both inside and outside the region.

The US solar industry is worried. China accounts for 68 percent of global polysilicon production, and virtually all silicon-based solar panels are likely to contain some Xinjiang silicon, according to Jenny Chase, head of solar analysis at Bloomberg New Energy Finance. If these firm-specific bans were to be applied regionwide, either through executive action or legislation, they would massively disrupt the supply chains of US-based solar companies.

Due to growing concerns over forced labor, the Solar Energy Industries Association, a major trade group, released a traceability protocol in April 2021. The protocol outlines a series of best practices, most important of which is an "independent, third-party audit mechanism to measure a company's implementation of traceability policies and procedures."

Third-party audits are the key element in industry-led attempts to ensure supply chains are free from inputs sourced under unethical or illegal circumstances and/or that contribute to violence and political instability. The most famous of these, the Kimberley Process, was created to address "blood diamonds" that had been fueling conflict in places like Angola and Sierra Leone. Apple created its own certification process with third-party auditing to address similar concerns over the sourcing of tin, tantalum, tungsten, and gold (3TG) from the Democratic Republic of the Congo.

Third-party auditing and verification processes are, in principle, a good way of addressing these concerns by removing parties with direct economic interests from the equation. They can, however, be quite difficult to implement for a variety of reasons, but the most fundamental is the governance environment in which they occur. In the case of blood diamonds and 3TG, third-party auditing and verification processes are complicated largely by the very political instability and violence these processes were designed to address. Certification processes were created precisely because much of the harvesting was occurring in active war zones outside the government's control.

In Xinjiang, the problem is not the absence of government authority but rather its pervasiveness and oppressiveness. Third-party audits can work only if the auditors are allowed to do their jobs: independently assess product sourcing and labor conditions. China is among the most strictly controlled information environments on earth. The Varieties of Democracy (V-Dem) Project is the most state-of-the-art attempt to measure political rights around the world. Its "alternative sources of information index" captures the extent of media freedoms and the ability of the media to report information critical of the regime, cover opposition parties without bias, and represent all political viewpoints within a country. The index ranges from 0 to 1, with higher values representing greater access to alternative sources of information. Since President Xi Jinping's ascent to power, China's score on this index has been virtually indistinguishable from that of North Korea (see figure). 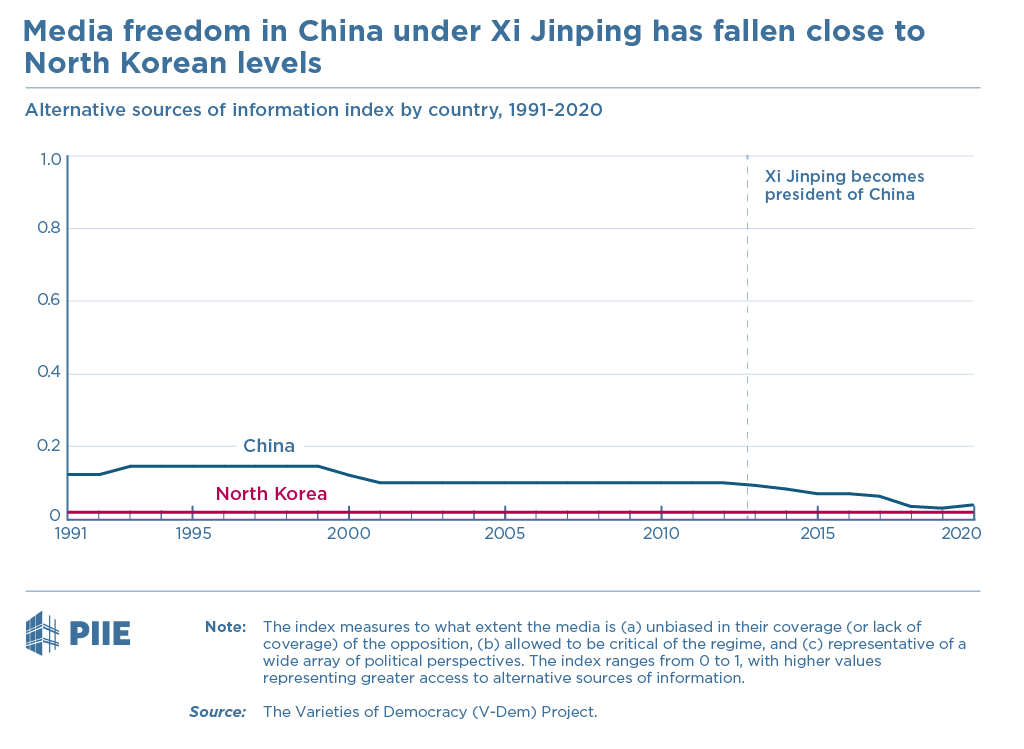 Conditions in Xinjiang are even more restrictive. The Chinese government has stopped independent auditors at airports and sent them back or forced them to use government-supplied interpreters/minders. Locals, even Han locals, who speak to the foreign press are subject to arrest. China has created a surveillance state in the region the likes of which the East Germans could only have dreamed. The idea that credible, truly independent third-party audits can occur in such an environment is a fantasy.

Third-party auditing and verification processes are a reasonable industry-led response to problems of monitoring supply chains and addressing concerns about human rights. The problem, however, is that they are needed most where they are least likely to work—and Xinjiang would be among the most challenging places possible.

US economic sanctions against human atrocities in China and Myanmar

Raising a caution flag on US financial sanctions against China

Will Trump Throw Oil Sanctions on the Fire of US-China Relations?