Trumped Up? The Mexican Economy in 2017 and Beyond

A little more than a year ago, the economic outlook for Mexico was looking up. In October 2015, economists at the International Monetary Fund (IMF) projected growth as likely to improve in 2017, following three years of subpar performance. The Fund’s World Economic Outlook flagship report estimated that average growth of 2 percent in 2013–15 would surge to 3 percent by the end of 2016. The IMF estimated that from 2017 to 2020 Mexican GDP would increase at an average pace of 3.2 percent per year while inflation would remain anchored around the central bank’s target of 3 percent.

Today the optimism over Mexico’s economy has evaporated and given way to uncertainty aggravated by tensions with the United States over trade, immigration, and the Trump administration’s confrontational approach. Not helping the country’s prospects are the government’s difficulties in advancing its reform agenda of fiscal consolidation, breaking up monopolies, broadening the tax base, and encouraging business investment. Mounting violence and corruption allegations have also been hobbling economic progress.

However, President Enrique Peña Nieto, already politically embattled because of his own missteps, will have to navigate a treacherous negotiation with the North American Free Trade Agreement (NAFTA) partners and face tough political challenges with presidential elections scheduled for June 2018. Compounding the increasingly adverse economic conditions is the possibility that the left-wing populist Andrés Manuel López Obrador (known as AMLO) could win the presidency with a set of interventionist policies that may unhinge the Mexican economy for years to come, hurting the United States.

Growth projections for 2017 were falling steadily after February 2016, but the steepest drop occurred after the US elections in November (figure 1). 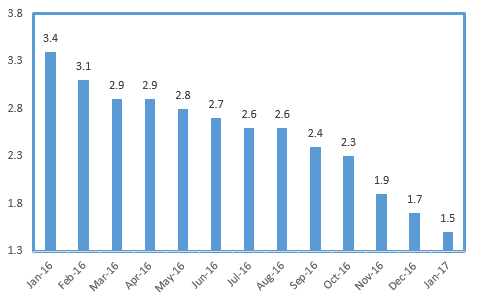 Forecasts for 2018 have also been downgraded to just 2 percent from a previous 3.2 percent, according to the IMF’s latest World Economic Outlook update. The Mexican peso has devalued more than 13 percent against the dollar since the US elections and continues to reflect high uncertainty resulting from confrontations between the US and Mexican governments, despite frequent interventions by the Central Bank of Mexico (figure 2). There are growing fears that currency devaluation could add to inflationary pressures, bumped up recently by a vastly unpopular hike in fuel prices, which has been condemned by presidential contender AMLO. Prices have been rising steadily since mid-2016, and inflation is currently above the 3 percent target, at 3.4 percent. According to Bloomberg, markets expect inflation to rise to 4.1 percent by the end of 2017 (figure 3). The rise in inflation expectations reflects market perceptions that recent devaluations will raise domestic prices and that further currency weakening will continue in the months to come. 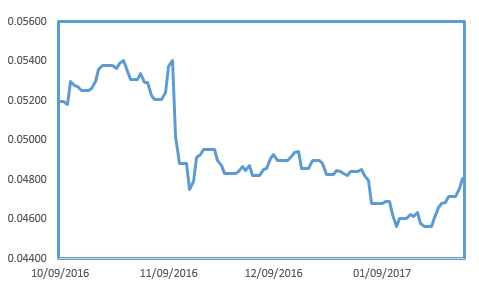 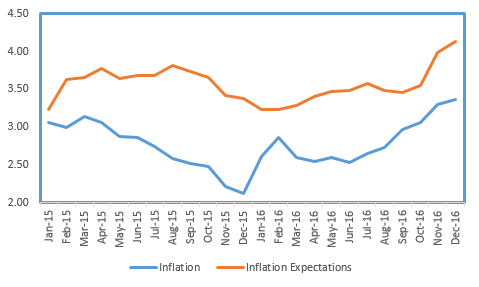 President Trump’s decision to sign an executive order on the border wall with Mexico on the same day that two high-ranking officials had come to the United States to kick start talks with the new administration on NAFTA led to President Peña Nieto’s decision to cancel his planned state visit, sending bilateral relations into a tailspin. While Trump stepped up the negative rhetoric on Mexico, threatening to impose a 20 percent tariff on Mexican goods, which would be inconsistent with NAFTA, Mexican authorities took a more constructive stance by announcing that they have initiated consultations with the private sector to learn of business priorities and outline the government’s strategy in future negotiations. Although both the United States and Mexico stand to lose if NAFTA unravels—half a trillion dollars and millions of jobs are at stake—the two economies are so intertwined that it is hard to quantify the potential damage to Mexico.

Another Mexican concern is that some automakers under pressure from President Trump have decided to scrap plans to build plants in Mexico. These decisions have dampened expected investment flows into the country. Despite the grave damage walking away from NAFTA will cause, Mexico may choose to do so if making concessions to the United States hurts foreign investment from other countries. Put differently, mistrust is at an all-time high on the Mexican side, especially as the economy deteriorates on account of President Trump’s abrasiveness.

Lower growth, higher inflation, and a weakening currency have derailed the government’s prospects for fiscal consolidation this year and beyond. Although gross public debt remains sustainable at around 56 percent of GDP, the steady increase since 2010 has prompted some ratings agencies to place Mexico on negative watch. The Mexican authorities intended to reduce public sector borrowing requirements to 2.5 percent of GDP by 2018 from slightly above 3 percent currently, which may no longer be feasible in view of deteriorating conditions.

If left-leaning populist AMLO wins the presidential elections next year, Mexico could be in for a very rough ride in the longer term. An unstable southern neighbor would likely increase the flow of illegal immigration into the United States from Mexico and Central America, wall or no wall, which is exactly what President Trump wishes to avoid.

Will Pelosi Allow a House Vote on USMCA?

Tariffs on Mexican Products Will Not Curb Migration from Guatemala, Honduras, and El Salvador; Prosperity Will