The US employment-population ratio—the share of the civilian population ages 16 and older that is currently working—has fallen from 62.8 percent in the fourth quarter of 2007 (the peak of the business cycle prior to the Great Recession) to 60.3 percent in the first quarter of 2018, a 2.5 percentage-point decline.1 While this decline is substantial, it is entirely the predictable consequence of the aging of the US population, as the movement of a larger fraction of the population into older age groups that are less likely to work has mechanically lowered the overall employment rate. However, when adjusted for age—that is, applying earlier employment rates for different age groups to the current, now older population—the employment rate is essentially back to its pre-recession level.

The roughly unchanged age-adjusted employment rate over the last decade reflects very disparate experiences for different age groups. Among those ages 55 and older, the age-adjusted employment rate rose by 1.7 percentage points over this period, while it fell by 2.3 percentage points for those under age 25 and by 0.4 percentage point for those ages 25 to 54. This is the same pattern as in the previous business cycle, though the pace of change has generally slowed, particularly for older and younger workers.

By itself, this analysis cannot answer the question of whether or by how much the US economy is operating below its potential, or, in other words, how much slack remains in the US economy today. The answer to this question also depends on other factors like the state of employment in the fourth quarter of 2007, the base period used for this analysis, and also trends in part-time employment. Ultimately, any complete assessment of US economic potential would need to examine not just labor market quantities but also trends in wages and prices.

Adjusted for Aging, the Employment Rate Is Back to Where It Was Prior to the Great Recession

Older Americans are much less likely to work than younger Americans: The employment rate for workers ages 25 to 54 averaged 79 percent in 2017, while the average for workers ages 60 to 64 was 55 percent. As a result, the aging of the population will tend to drive the employment rate down, even if employment rates for particular age groups (such as older men or younger women) remain constant. This represents a purely "demographic" effect that largely reflects child-bearing decisions made decades ago and which, as a result, does not reflect current economic conditions. 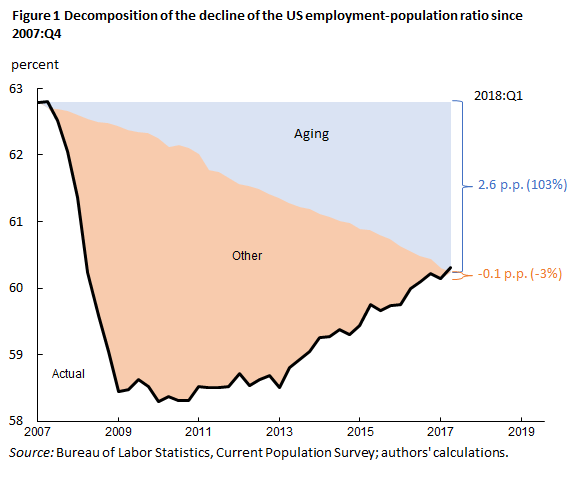 The roughly flat age-adjusted employment rate from the fourth quarter of 2007 to the first quarter of 2018 shown in figure 1 represents the net effect of changes in participation rates since 2007 within particular age groups. Table 1 shows the effects by decomposing this age-adjusted increase into the portions attributable to six age-sex groups. 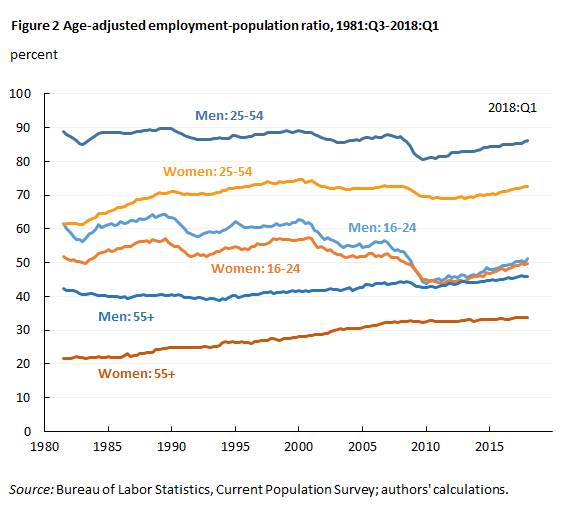 Labor Force Participation Rates, Adjusted For Age, Are Slightly Below Their Pre-recession Rates 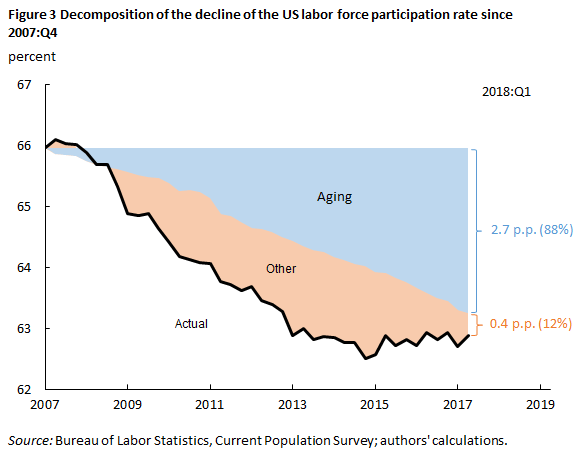 Is the United States At or Above Full Employment?

This analysis should not be taken as a definitive comment on whether the US economy is operating above, at, or below full employment. Any such analysis would need to consider not just quantities, as discussed above, but also prices and wages, both of which provide evidence about the degree of slack in an economy.

Nevertheless, the analysis above does help frame the argument about where the United States is relative to full employment:

The case for the United States being below full employment is that trends prior to the current expansion in fact reflected chronic underemployment; as a result, age-adjusted employment rates that are even higher than those in late 2007 do not indicate that the economy is operating above capacity. Moreover, proponents of this case could argue that the improvement in employment rates for older workers has been common across advanced economies—and may be a structural indicator of, for example, the decline in manual jobs—and thus should not be credited as an offset for the decline in employment rates for prime-age workers, which are a better proxy for labor market slack. Another argument for the continued existence of slack is that the fraction of the workforce employed part-time for economic reasons—those currently working part-time but who would prefer a full-time job—remains 0.2 percentage point above its value in the fourth quarter of 2007.

Time will help distinguish which of these two perspectives is correct. Still, what is unambiguous is that the United States has enjoyed a steady improvement in age-adjusted employment rates over the last seven years—but these improvements mask the lack of a full recovery in employment for prime-age men.

To calculate the effects on employment rates and labor force participation of the aging of the US population, counterfactual quarterly histories of these rates are constructed using data from the Current Population Survey conducted by the US Bureau of Labor Statistics. Employment and participation rates for age-sex groups are held fixed at their 2007 annual average values, while each age-sex group's population share evolves along its actual path since the fourth quarter of 2007.

Data for the following age-sex groups are used in constructing the counterfactual (since they are the most granular data published by the Bureau of Labor Statistics on a not seasonally adjusted basis):

1. Figures may not sum to totals due to rounding. The remainder of this blog post refers to the employment-population ratio as the employment rate.