In total, an additional 5.4 million of the unemployed since February reported being on temporary layoff, many of whom may anticipate a return to work after the end of COVID-19 pandemic lockdowns. If all of these people were immediately recalled back to work and the labor force adjusted accordingly—a very optimistic scenario—the "full recall unemployment rate" would still be a very elevated 6.6 percent. This measure fell from 7.0 percent in July, marking the largest improvement since May. These data suggest the temporary labor market problems are very deep and that even if individuals on temporary layoff returned to work very quickly, the United States would still have a recessionary level of unemployment for some time to come.

The evolution of these three alternative measures of unemployment—official, realistic, and full recall—is shown in the figure below. 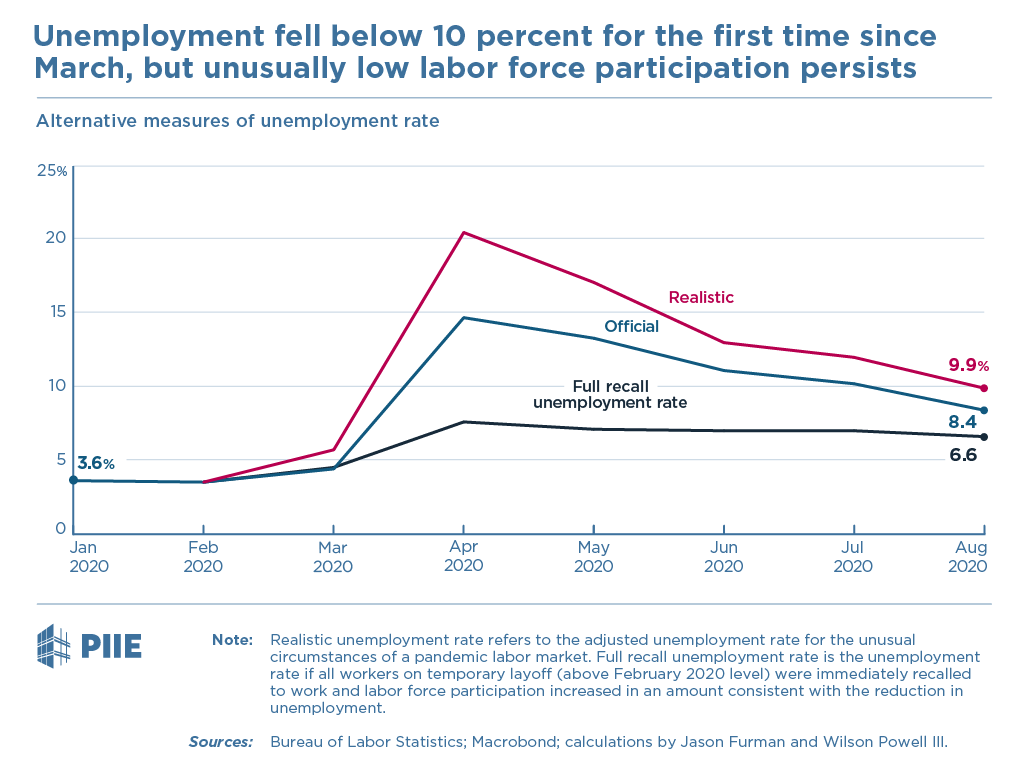 The first adjustment is to reclassify the additional 1.1 million workers who reported being "not at work for other reasons" as unemployed. The BLS explained that its "analyses of the underlying data suggest that this group may still include some workers affected by the pandemic who should have been classified as unemployed on temporary layoff, although the degree of misclassification in July and August was considerably lower than in prior months."

The second adjustment reflects the very large reduction in labor force participation, which was unusually large even conditional on the large increase in the unemployment rate. The labor force participation rate fell 1.6 percentage points between February and August as 3.7 million more people without employment also did not actively look for work and thus were not counted as being unemployed or part of the labor force. To put this in context, from 2007 to 2009, as the unemployment rate jumped to 10.0 percent, the participation rate fell only 1.2 percentage point (or 0.8 percentage point adjusted for population aging). This suggests that some of the people exiting the labor force since February may have done so temporarily because of the difficulty and impracticality of searching for the jobs during the peak pandemic period.

Note that this "realistic unemployment rate" differs from the broader labor underutilization measures published by the BLS. The BLS publishes U-4 which adds discouraged workers, U-5 which also adds other marginally attached workers who are available for work but not actively looking for a job, and U-6 which further adds those involuntarily working part-time for economic reasons. These measures are, by definition, always higher than U-3 because they add to the unemployed. In contrast, the "realistic unemployment rate" adds only the unusually large increase of nonparticipants to the unemployed, thus making it comparable to previous headline unemployment rates. This procedure, however, entails a hypothetical counterfactual exercise whereas U-4, U-5, and U-6 are all based directly on survey responses.

The "full recall unemployment rate": What would happen if all furloughed workers were immediately called back

In August 6.2 million workers reported being on temporary layoff, much higher than the 801,000 in February, but a sharp reduction from July. Note that the BLS changed its procedures and adopted a relatively broad definition of temporary layoff, so this number may include workers who have not in fact been furloughed from their jobs but were actually fired (see here for a full discussion).

It is unclear how many temporarily laid off people will return to their employers. Historically about 70 percent of workers on temporary furloughs return to their jobs, but this historic experience may not be applicable in the current circumstances. Assuming optimistically that all workers newly on temporary layoff had returned to their jobs (and following the BLS in counting those "not at work for other reasons" as employed) the unemployment rate would have been 5.1 percent in August, up slightly from July and well below the 7.2 percent July unemployment rate in the European Union, which generally counts furloughed workers as employed.

This, however, is an artificially low unemployment rate because it makes the optimistic assumption that 5.4 million people return to their jobs while simultaneously assuming no commensurate increase in people looking for jobs. Any economy in which 5.4 million people were rehired would also see an increase in labor force participation from the still low August rate given the greater availability of jobs. To address this, our "full recall unemployment rate" makes the counterfactual assumption that 2.7 million people re-enter the labor force, again making the change in the age-adjusted participation rate consistent with its historic relationship with the change in the unemployment rate.

By any measure the US economy, like other economies around the world, experienced a dramatic reduction in economic activity that put millions of people out of work through early August, the time period covered by this report. The future prospects of the labor market will depend on the trajectory of the virus—cases have fallen from the recent July peak, the further policy response—Congress still has yet to reach a deal on the extension of additional unemployment benefits, aid to state and local governments, or additional support for businesses, and on how many people without jobs can quickly connect with their old jobs instead of undertaking the time consuming process of finding a new job, or even a job in a new industry.

Understanding the data can help inform projections of the trajectory of labor market recovery. This is consistent with a "partial bounce back" in the labor market, as the unemployment rate falls quickly at first, followed by a "slog" where the unemployment rate slowly falls but remains at an elevated level for a prolonged period. Further progress in the "partial bounce back" phase will only get harder, especially if the virus remains a widespread concern. Of course, this is just one of many other possible future trajectories for unemployment, so a better understanding of the recent past of employment can only shed a tiny bit of light on the future of employment.

US unemployment situation worsens in November