US vaccine rollout must solve challenges of equity and hesitancy

This essay is part of a PIIE series on Economic Policy for a Pandemic Age: How the World Must Prepare.

The effort to immunize the US population against COVID-19 as quickly as possible is one of the most complex logistical undertakings ever attempted in this country. Four obstacles have hobbled health authorities’ efforts thus far: The supply of doses from the manufacturers has been limited; bottlenecks have disrupted the pipeline from manufacturers to recipients; too many people are hesitant to accept the vaccines; and the distribution of doses across the population has been grossly inequitable. Recently, however, supply has been increasing, bottlenecks are being worked out, and hesitancy has receded.

But more effort must be invested to persuade people of the value of the vaccines and to reach all segments of society, particularly communities of color, immigrants, and those least able to bear the costs of the disease. These steps are all the more urgent because pandemics are on their way to becoming a chronic aspect of the US and global landscapes.

As might be expected with such a massive and complex effort, many aspects have been chaotic, frustrating, and inefficient. More planning went into the development and manufacture of vaccines than into their distribution. State health authorities reportedly failed to move aggressively in thinking through the complicated steps that would be involved in reaching all corners of their populations. They rightfully complained that the federal government provided shifting and late guidance on the number of doses they would be allotted. Hospitals and other elements of the health system already overwhelmed with caring for desperately ill patients struggled to divert personnel and other resources to the task of injecting shots into arms.

Initially, capacity for manufacturing the vaccine was limited. Even by the end of January, the federal government had delivered only 50 million doses to state and other similar authorities. Given that two doses were required of the vaccines that had been granted Emergency Use Authorization, that amount represented less than 8 percent of the doses required to immunize the US population. Over the second half of January, only about 1.3 million doses per day were being delivered by the Centers for Disease Control and Prevention (CDC). If that pace had been maintained, the states would not have received enough doses to immunize the entire US population until the end of April 2022.

Since then, the supply outlook has improved. As of March 7, more than 116 million doses had been delivered to the states, and the average pace of shipments over the week ending March 7 picked up to 2.9 million doses a day. Moreover, a third vaccine (the one from Johnson & Johnson) has been granted Emergency Use Authorization. This vaccine has the considerable advantages of requiring only one injection rather than two and of being storable for up to three months at normal refrigerator temperatures and up to two years at essentially the temperature of a standard freezer. Although only a few million doses of the J&J vaccine were ready to be shipped when the Emergency Use Authorization was granted, J&J has committed to providing 100 million doses by the end of June—enough to vaccinate 30 percent of the population—and should meet that commitment even earlier under an agreement that will have Merck help make the J&J vaccine. On March 2, President Joseph R. Biden Jr. announced that the United States should have enough doses by the end of May for every adult in the country.

During the early weeks of the distribution effort, state and local health authorities could not keep pace even with the limited flow of doses from manufacturers; in addition, some states and localities may have continued withholding second doses even after the federal government gave up on that strategy. For whatever reason, fewer doses were being injected into people’s arms each day, on average, than were being shipped to the states. As a result, the backlog of doses that had been shipped but not injected increased rapidly. By the second week of January, this backlog had moved above 15 million doses (see figure 1).[1] Since then, as states and localities have increased their capacity to administer the vaccines, and perhaps as they stopped holding back second doses, the backlog has mostly trended sideways. Some of the fluctuations in the size of the backlog during mid- and late February may have been due to the harsh winter weather that disrupted both shipments and injections for several days. During the first week of March, more than 2.1 million doses were administered on average per day—the fastest daily pace yet, but still not as fast as the stepped-up pace of delivery. As a result, the backlog moved above 25 million doses in the first week of March. 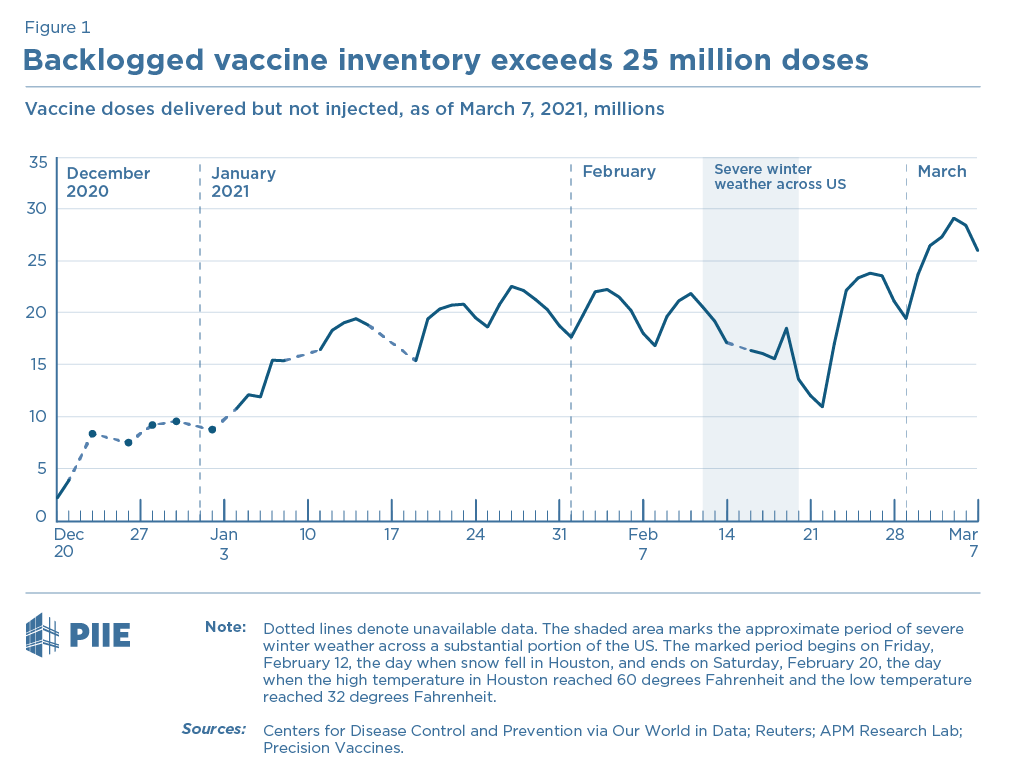 No compelling explanation has yet emerged for why some states have gotten vaccine into arms so much faster than others. William Galston and Elaine Kamarck examined a number of possible explanations, including that having a small population might help, or that having more vaccination sites per capita might be a plus, or that higher-income states might do better. None of these potential explanations does a very good job of explaining the differences in performance. States and localities have thus far been left to figure out the retail piece of this operation on their own, and it could be that the best explanation for differences in performance is that competence in state and local administration matters.

With the supply situation clearly moving in the right direction and the kinks slowly being worked out of the distribution system, one critically important remaining challenge is that the distribution of doses thus far has been deeply inequitable. Although Black and Hispanic persons have died at far higher rates relative to white persons, Black and Hispanic persons have been vaccinated at much lower rates relative to whites.[2] If vaccine doses were administered in proportion to the incidence of hospitalization or death, the pattern of inoculation would be reversed, with whites receiving a much smaller proportion of total doses than either Blacks or Hispanics.[3]

A wide variety of issues could explain the many gross inequities that are evident in data on vaccination rates. Lower-income individuals may not have the same ease of access to the internet (crucial for registering for a vaccination) as higher-income people or may be more concerned about data charges associated with filling out an online form. Immigrants may be concerned about providing personal identifying information if they are in this country in an undocumented status. Pharmacies and hospitals may be scarcer in areas where minority populations are concentrated, and options for transportation to vaccination sites may be limited or inconvenient and may intrinsically involve heightened exposure to other potential carriers of the disease. Anecdotal reports suggest that even when local authorities set up vaccination sites in areas easily accessible to high-vulnerability minority communities, privileged whites in some cases have travelled to those sites, snapped up available slots, and thereby effectively denied doses to some of those for whom they were intended.[4]

One final issue clearly has played a role thus far in impeding the rollout of the vaccine and may come to play a larger role as the supply of doses begins to catch up with demand: Hesitancy. Roughly one-third of members of the military have refused to take the vaccine. In the first month of the rollout of the vaccine at skilled nursing facilities, three-fourths of residents were inoculated but only a little more than one-third of staff chose to take a jab.

A series of surveys conducted by the Kaiser Family Foundation has shown that overall hesitancy has receded somewhat. In February, Kaiser found that 44 percent of adults surveyed either would “wait and see” whether to get a vaccine, would do so “only if required,” or would “definitely not” get a vaccine. This share was down from 63 percent in December and 51 percent in January, but it remained high enough to potentially impede the overall effort to disrupt community transmission of the disease.

Hesitancy may have played a role in generating disparities in vaccination rates across races and ethnicities. In mid-February (the time of the most recent Kaiser survey), the share of respondents saying they would either “wait and see” whether to get a vaccine, would do so “only if required,” or would “definitely not” get the vaccine was 57 percent for Black adults, 48 percent for Hispanic adults, and 37 percent for white adults. Although these percentages have declined since December for all three groups, they remain high and the differences across groups remain wide.[5]  Hesitancy is difficult to measure, however, and different surveys have found different levels of it among different groups. A Civiqs survey from March 8 found vaccine hesitancy is higher among white Republicans than any other demographic group with little change over several months.

Whatever the underlying reasons, as the overall supply of vaccines continues to increase and the bulk of the willing population is vaccinated in the next few months, hesitancy among Blacks could become a key stumbling block on the road to inoculating enough people to decisively suppress the community spread of the virus and slow the development of new variants.

Lessons for the pandemic age

This post was updated on March 10, 2021, with a clarification on the issue of vaccine hesitancy.

1. The backlog calculated here represents the difference between (a) the number of doses reported as having been delivered by the federal government to state and other similar authorities, and (b) the number of doses reported as having been injected into people’s arms. The backlog, calculated in this way, may differ from the number of doses that states have available for future administration due to a couple of considerations: First, to the extent that doses have been lost due to spoilage or other issues, the remaining available number of doses will be smaller than the number reported here. It is clear that some spoilage has occurred; for example, in Memphis, TN, the top health official resigned following revelations that 2,400 doses had been allowed to expired. Second, there may be discrepancies between the number of doses reported as having been distributed versus administered due to issues related to how many doses were contained in each vial of vaccine. At some point, the realization was made that if especially efficient syringes were used, six doses could be extracted from each vial rather than the originally advertised five. However, efficient syringes were not universally available. It is not apparent from public reporting whether the manufacturers have been claiming six doses per vial, and it is not apparent how many doses per vial have been extracted in practice. These data-related issues could be solved if states tallied directly the number of doses remaining in inventory and available for future administration, but no such data are publicly available.

4. Again, see the report from the Miami Herald cited earlier.

5. One indication that vaccine receptiveness may continue to improve is that Kaiser survey participants with closer connections to someone who had already been vaccinated were more likely to say they would get vaccinated as soon as possible. See figure 11 in KFF COVID-19 Vaccine Monitor: February 2021.

6. The mention of the syphilis study is a reference to the notorious Tuskegee study in which African American men were told they were being given free health care but were not and in fact were being observed for long-term effects of untreated syphilis.

Economic Policy for a Pandemic Age: How the World Must Prepare

For a fairer fight against pandemics, ensure universal internet access

How to accelerate vaccine innovations to counter future pandemics