Why some experts got pandemic readiness wrong

The Global Health Security Index, released in 2019, was intended to identify which countries would perform best at addressing pandemic disease—and seemingly at precisely the right time. Yet the countries that experts thought were best positioned to deal with pandemic diseases like COVID-19 included the United States and the United Kingdom, which have been failing to contain the spread of the virus. How did the experts get it so wrong?

The apparent failure of this well formulated and funded expert assessment provides a useful window into a fundamental challenge in assessing government capacity: the lack of political will, in this case to sustain costly closures and lockdowns, as well as less costly measures like wearing masks. We tend to assume the reason governments do not do things such as enforce contracts, provide for public safety, and support public health is because they cannot do these things rather than because they lack the political will and consensus support to act.

Though harder to quantify and assess objectively, the political will to use whatever capacity is available is key—and is evidently lacking in some places, perhaps because of the belief in the false dichotomy that one can have either a healthy population or economic activity, but not both. A well-crafted tool is just as useless as a poorly-crafted one if it never gets picked up in the first place.

The performance of countries in the Organization for Economic Cooperation and Development (OECD) in responding to the COVID-19 pandemic has varied greatly. As of January 23, 2021, New Zealand, South Korea, Australia, and Japan had all managed to keep COVID-related mortality rates below four deaths per 100,000 inhabitants. Meanwhile, Belgium, the United Kingdom, and Italy have all seen mortality rates above 140. And while Italy was ground zero for the first wave of the epidemic in Europe, which caught public health systems off guard, even countries that had much more time to plan a response, like the United States, Mexico, and Chile, have performed poorly.

The story is not one of inadequate aggregate resources: There’s very little correlation (ρ = -0.18) between GDP per capita and COVID-19 mortality rates, and OECD members are among the most advanced, industrialized, and post-industrialized economies in the world. Wealthier has not been healthier, at least with respect to COVID-19. Nor is it a case of more aged populations being more susceptible, even though COVID-19 is much more dangerous for the elderly: Japan, the oldest country in the OECD, is performing far better than the youngest (Mexico and Israel).

If wealth and age are not factors, perhaps the quality of public health systems is, in particular their ability to address epidemic and pandemic disease. In 2019, Johns Hopkins University partnered with the Nuclear Threat Initiative and the Economist Intelligence Unit to release the Global Health Security (GHS) Index. With funding from the Bill and Melinda Gates Foundation, the Open Philanthropy Project, and the Robertson Foundation, the NTI-JHU-EIU triumvirate worked with an international advisory board of 21 experts from 13 countries to analyze 34 indicators and 85 sub-indicators to assess national capabilities to “to address one of the world’s most omnipresent risks: infectious disease outbreaks that can lead to international epidemics and pandemics.” Seemingly, the right people were asking the right questions at just the right time.

There’s just one problem: Neither the GHS Index, nor any of its sub-indicators, are useful for explaining which countries have been successful in suppressing COVID-related mortality. The two countries that scored highest on the index, the United States and Great Britain, have also been among the least effective at saving lives. The GHS Index and COVID-19 mortality are virtually uncorrelated (ρ = 0.06): If anything, countries with higher index scores have seen greater COVID-19 mortality.[1] 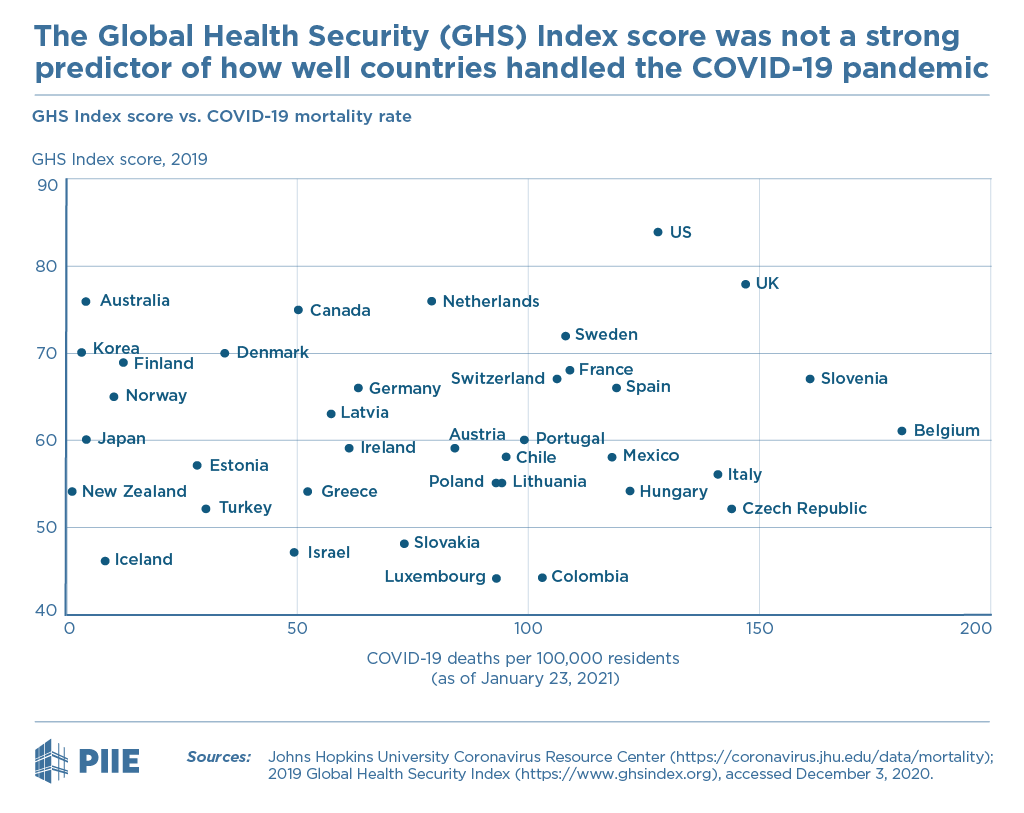 What did the GHS Index get wrong? The advisory board was international, diverse, and with occupational backgrounds that would minimize disciplinary groupthink and purely Western perspectives. The indicators and sub-indicators were the “right” indicators for thinking about national health capabilities: They were committed to “improv[ing] international capability to address one of the world’s most omnipresent risks: infectious disease outbreaks that can lead to international epidemics and pandemics” (NTI-JHU-EIU 2019, p. 5). The funders were serious, results-driven donors who exercise significant oversight over the way their monies are spent.

What the architects of GHS appear to have underestimated—or have miscalculated about the specific nature of the COVID-19 pandemic—is the importance of political leadership, social consensus on the necessity of bearing containment costs, and geography.

COVID-19 cases may be fought by national healthcare systems, but fighting COVID-19 transmission is largely about enacting and enforcing measures that result in social distancing and mask wearing, like lockdowns and closing schools, restaurants, and bars, as well as widespread testing and contact tracing. It is also about the populace being willing to make necessary sacrifices (mask wearing, not attending large gatherings) for the collective good.

Enforcing social distancing has proven difficult in the absence of lockdown measures, business and school closures, and travel restrictions. And as lockdowns and closures have proven quite economically costly—at least in the short term, even if the economy cannot hope to rebound until the virus is contained—they require substantial political will to enact and maintain, especially in the face of violent, sometimes armed opposition and a lack of consensus around mask wearing and avoiding large gatherings.

Both political will and social consensus have been lacking in some of the countries that experts thought were best positioned to meet the challenge. The ability to act is separate from willingness to do so.

Another important factor appears to have been the feasibility of tightly controlling borders and effectively monitoring entrants at a limited number of entry ports. Of the five countries that have managed to keep COVID-related mortality under 10 per 100,000 residents, four have been island countries: New Zealand, Australia, Japan, and Iceland. The fifth, South Korea, might as well be: It is separated from the rest of Asia by North Korea, and the demilitarized zone between the two countries is the world’s most heavily fortified and least traversed border.

The United Kingdom and Ireland are effectively island nations (only sharing a border with one another), but the deep integration of their economies with those of continental Europe and the ability to travel between the mainland Europe and the British Isles by motor vehicle has rendered them less capable of walling themselves off from the global pandemic.

The Global Health Security Index was created with the best of intentions. Perhaps the key to understanding why its conclusions have been so out of sync with actual national responses to the COVID-19 pandemic is that its creators assumed governments would share their goal: that faced with a novel disease, governments would make containment and the prevention of a global pandemic their primary goal and mobilize their available resources accordingly. That does not seem to have been the case.

1. The sub-indicators are: 1. Prevention: Prevention of the emergence or release of pathogens; 2. Detection and Reporting: Early detection and reporting for epidemics of potential international concern; 3. Rapid Response: Rapid response to and mitigation of the spread of an epidemic; 4. Health System: Sufficient and robust health system to treat the sick and protect health workers; 5. Compliance with International Norms: Commitments to improving national capacity, financing plans to address gaps, and adhering to global norms; 6. Risk Environment: Overall risk environment and country vulnerability to biological threats. All data are normalized to a scale of 0 to 100, where 100 = best health security conditions. The strongest correlation between COVID-19 mortality rates and any of the indicators (compliance with international norms) is only weak and also positive (ρ = 0.13).

As China recovers from the pandemic, will zombie firms return?

Inflation fears and the Biden stimulus: Look to the Korean War, not Vietnam