The upset election victory of Donald Trump in 2016 resulted from the unsettling social and economic changes in American society, not least the anxiety over job losses caused by technology and international trade competition. But other factors such as race, education, age, and rising diversity among voters also contributed to a shift by some white voters toward Trump, especially in pivotal industrial states.

Research also suggests that technological change, not trade competition, has been the main source of job loss in most US manufacturing industries. If this analysis is correct, the trade protection that is now a centerpiece of the Trump administration’s policies will not only fail to resolve the underlying problem but that failure could cause the political system to reach for even stronger and more destructive cures than erecting trade barriers.

Mark Muro, Robert Maxim, and Jacob Whiton from the Brookings Institution took an index of potential vulnerability to automation for more than 800 occupations prepared by the McKinsey Global Institute (MGI) and combined it with county-level employment data to produce a county-level employment-weighted average of automation potential. (Jacob Whiton kindly shared the data with us.)

The MGI index was computed on the basis of 2014 data, and the county-level employment data are from 2016. Accordingly, in statistical terms, relative to the 2016 election, the county-level measure of potential automation is not predetermined: One cannot say that this variable caused an outcome. Nevertheless, it would be suggestive to examine if the measure correlates with the 2016 election result.

The scatterplot figure shown here illustrates a simple correlation between average automation potential and changes in the Republican share of votes from 2012 to 2016. Counties that shifted toward the Republican candidate more in the last election tended to be more vulnerable to automation in 2016. 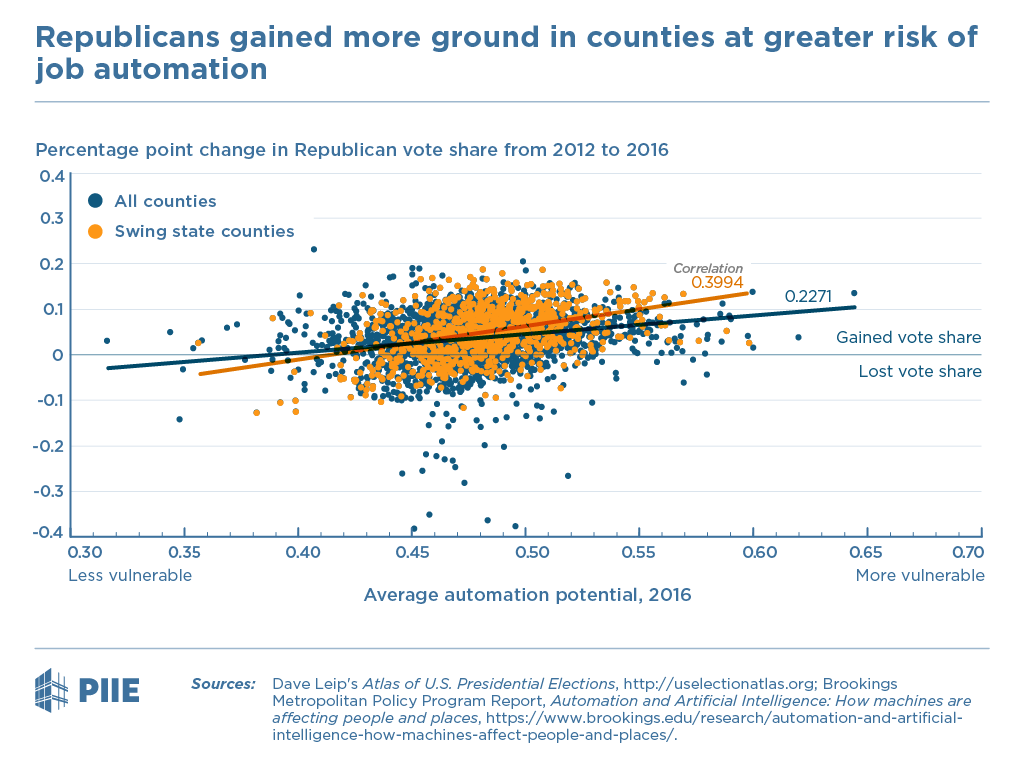 More rigorous regression results are presented in the table. These regressions use the same dataset used in our Working Paper, Protectionism under Trump: The China Shock, Intolerance, and the "First White President," with data on county-level average automation potential from the Brookings Institution. The first regression (column 1.1) simply regresses the automation measure against the percentage point change in the Republican county-level presidential vote share from 2012 to 2016. The county-level share of jobs vulnerable to automation is positively associated with a rise in the Republican presidential vote share.

In addition, an analysis of swing states (Colorado, Florida, Iowa, Michigan, Minnesota, Nevada, New Hampshire, North Carolina, Ohio, Pennsylvania, Virginia, and Wisconsin) indicates that on average they have been even more vulnerable to job loss due to technological change than the country as a whole, and they displayed a greater political sensitivity to that vulnerability.

To be clear, the evidence presented here is suggestive, not conclusive. But it underlines the notion that selling voters on the proposition that their problems are due to foreign trade competition when the root cause is technological change risks creating a frustrated electorate that might reach for even more radical measures when protectionism does not alleviate their pain.

The data underlying this analysis are available for download here [zip].