Canada Strikes Back! Here Is a Breakdown

Canada Day was celebrated this year with the government in Ottawa fulfilling Prime Minister Justin Trudeau's comment in June that "we're polite, we're reasonable, but we also will not be pushed around." More specifically, Canada imposed new tariffs on $12.8 billion of US exports starting July 1—the day of its unification in 1867—in retaliation to the Trump administration imposing "national security" tariffs on imports of Canadian steel and aluminum on June 1. Canada's action was dramatic. Its tariffs cover the most trade of any of the countries that have announced retaliation against Trump's steel and aluminum tariffs thus far.1

Canada's tariffs target not only American steel and aluminum but billions of dollars of US exports of agricultural and consumer products. American farmers, companies, and workers will all suffer the economic fallout associated with the Trump administration's aggressive and misguided trade policy.

The escalating trade battle began on June 1, when the Trump administration began applying its 25 and 10 percent national security tariffs on Canadian steel and aluminum products.  The US tariffs hit more than  $5.5 billion of Canadian exports of steel and nearly $7 billion of Canadian exports of aluminum in 2017. Canada had been exempted from the tariffs originally applied on March 23, but the exclusion disappeared when Trump decided to single out Canada,  Mexico, and other allies like the European Union for trade punishment.2

On May 31, Canada said it would retaliate and published an initial list of targeted products for public comment. Its revised retaliation list was published on June 29 and went into effect on July 1.

Breakdown of US Products Targeted by July 1 Canadian Tariffs

Canada’s tariffs imposed on July 1 hit hundreds of different products, targeting $12.8 billion of imports from the United States in 2017. Figure 1 breaks down the products by type.

Fifty percent of the US exports being hit with new tariffs are in steel and aluminum. American agricultural and food products are also a sizable target (19 percent) as are other consumer goods (24 percent). Canada is imposing an additional 25 percent tariff on US steel and an additional 10 percent tariff on aluminum and all of the other products. Except for steel and aluminum, Canada's retaliation seemingly attempts to avoid messing up its engagement in North American supply chains. In broad terms, Canada is not targeting imports of American capital equipment or intermediate inputs, focusing instead on final goods. The tariffs will be costly for Canadian consumers. 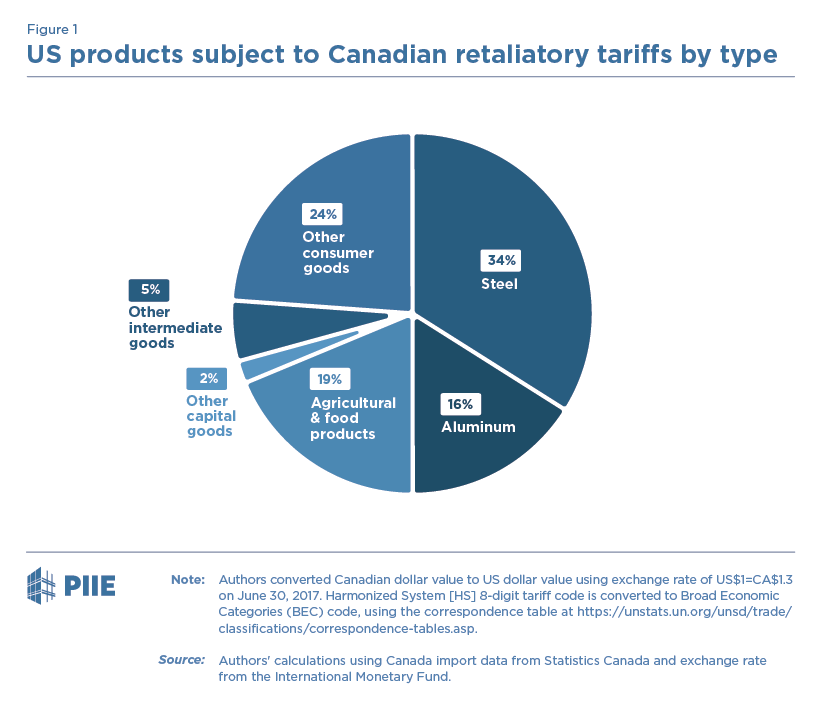 Figure 2 illustrates in more detail the dollar value of US exports of some of the top products hit by the new Canadian tariffs.

The top product is steel ($4.3 billion), followed by aluminum ($2.0 billion). One element of Canada's strategy is to target the same US economic industries—steel and aluminum producers—that stand to benefit from Trump's national security tariffs. Imposing costs on those industries may motivate them to work harder politically to convince the Trump administration to end the national security tariff policy.

Canada's 10 percent tariff on US aluminum will strike a second blow for much of the US aluminum industry that had already stated discontent with the Trump administration's tariffs.3 Many American companies rely on imported primary aluminum from countries like Canada to produce their downstream products for US customers as well as for export. Trump's tariff implies they face a 10 percent higher cost for their key input as of June 1, and Canada's retaliatory tariff means their potential exports to Canada now face an additional 10 percent duty. This combination may shut many American aluminum companies out of the Canadian market entirely.

Other major categories of products on Canada's retaliation list are processed foods and household goods. These include sauces, coffee, paper towels, boats, household appliances, and mowers. 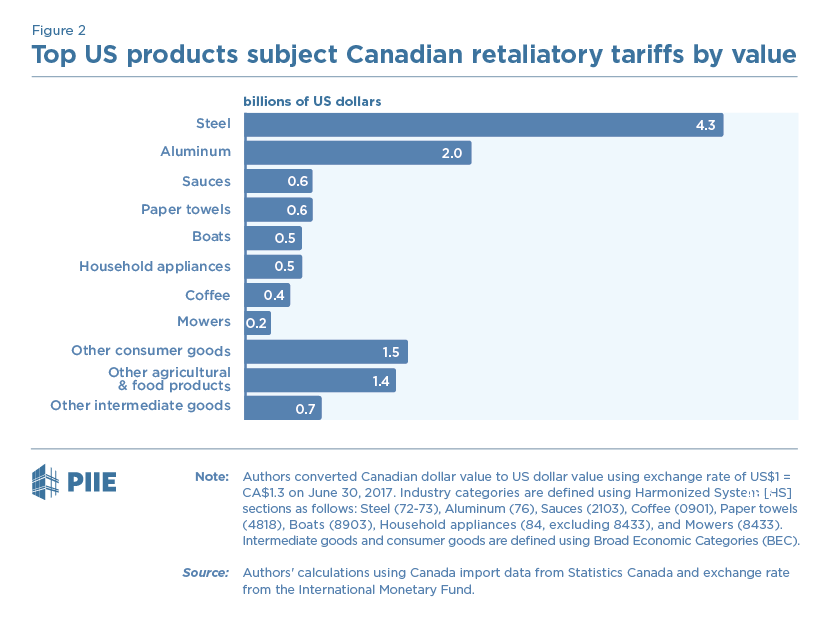 The thread that draws these products together is unfortunate. President Trump's trade policy has increased the challenges facing the companies that make these American products and their $12.8 billion of annual sales to Canada. These retaliatory tariffs don't apply to their competitors located in Canada or any other country in the world. American companies are increasingly being isolated. Trump's own trade policy is forcing Americans to compete under conditions that just aren't fair.

1. India is second most at $10.6 billion, but many US exports facing India's tariffs will face a much smaller tariff increase of 5 percent, relative to the 25 and 10 percent tariffs Canada is imposing.

2. The US tariffs announced on March 23 had applied to all foreign sources, except imports from the European Union, Canada, Mexico, South Korea, Australia, Brazil, and Argentina. On June 1, the tariffs were extended to the European Union, Canada, and Mexico. US tariffs on aluminum also began to apply to South Korea. Quotas were applied on steel and aluminum imports from Argentina and Brazil and steel imports from South Korea. As of June 1, Australia was the only country exempted from US tariffs or quotas on imported steel and aluminum.

3. The Aluminum Association's response to the Trump administration announcement that it would extend the aluminum tariffs on June 1 to countries like Canada and the European Union was "Today's action does little to address the China challenge while potentially alienating allies and disrupting supply chains that more than 97 percent of U.S. aluminum industry jobs rely upon."

The USMCA, Newly Jeopardized, Was Never a Free Trade Agreement

Sweating the Auto Details of Trump's Trade Deal with Mexico

Trump's Trade War Has Unified the World Against US Exports