It did not take long for the Chinese government to retaliate against the Trump administration’s latest Section 301 tariff announcement. Shortly after the US Trade Representative’s office released its revised lists of Section 301 tariffs on $46.3 billion of targeted Chinese products on June 15, China issued its own revised list of US exports on which it plans to impose additional 25 percent tariffs. This revised list must have been in the works, as it was published only hours after the USTR published the Trump administration’s revised lists.

China’s June 15 list targets $44.9 billion of US exports to China in 2017.[1] American farmers and ranchers are going to be hit hard: Nearly $17 billion of exports are in agricultural and food products, including soybeans, sorghum, and meats. But China also plans to impose new tariffs on billions of dollars of US exports of oil, plastics, chemicals, medical equipment, and liquified propane.

Within cereals, US sorghum exports of $0.8 billion would now be subject to these tariffs. China had initially announced preliminary antidumping and countervailing duties on US sorghum exports in retaliation to Trump’s tariffs on solar panels imposed in January and then subsequently reversed that decision in May.[4] 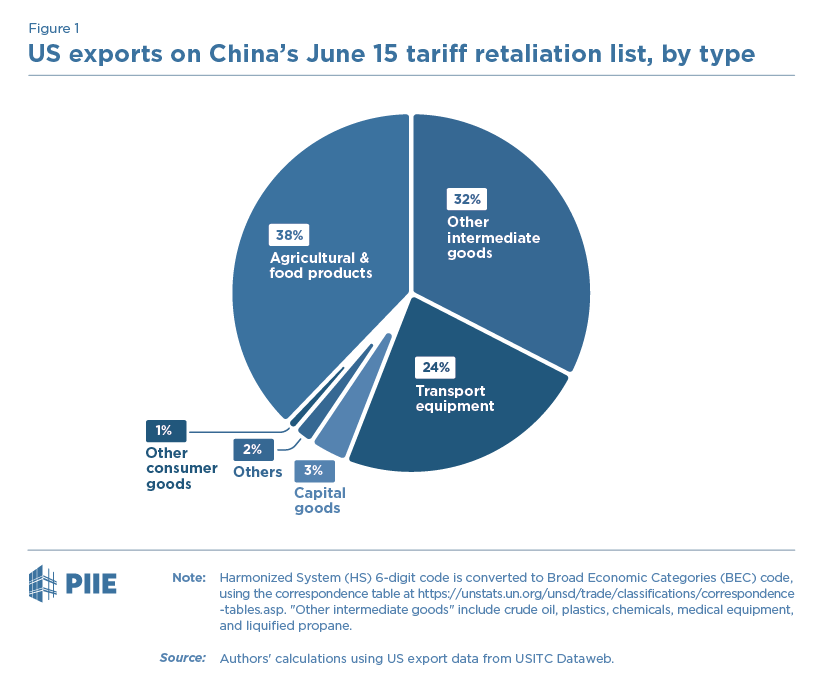 Most of the other products on China’s June 15 tariff list are intermediate goods (32 percent) and transport equipment (24 percent). The list notably includes $11.3 billion of US exports of vehicles to China in 2017.[5]

One major difference between the new June list and the initial list released on April 4, 2018—which covered $49.8 billion US exports to China in 2017—is that China removed $16.3 billion of US aircraft exports.

The added products comprise $11.4 billion of US exports in 2017. Figure 2 illustrates some of the top added product categories, including mineral fuels ($6.5 billion, including $4.4 billion of crude oil), medical equipment ($1.6 billion), and consumer goods ($2.0 billion). 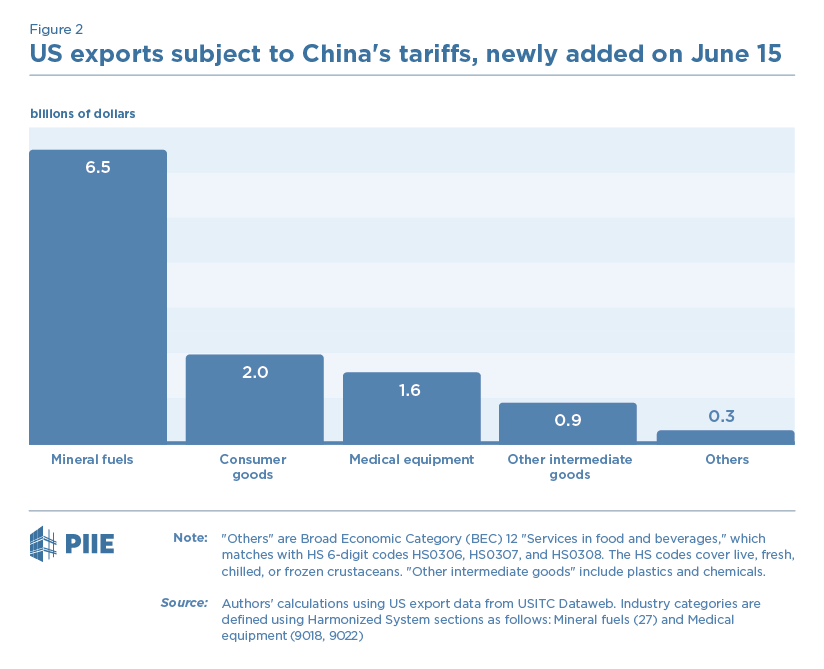 China appears to show a readiness to apply 25 percent tariffs on $29.6 billion of US exports on July 6 if the Trump administration’s first round of tariffs goes into effect that day. The major products to be hit by China that day include soybeans and vehicles.

China has indicated it would apply tariffs on the remaining $15.4 billion of US products—notably crude oil, plastics, chemicals, and liquified propane[6] —at a later time, if and likely when the Trump administration imposes the tariffs on its second list released on June 15. The Trump trade team has not yet announced the date of the second tranche of tariffs as products on that list are going through a period of public comment.

Trump and China need to reciprocally stand down

It is not too late to avoid the dire prospect of an escalating trade war with China. Tariffs of neither party have gone into effect. Nevertheless, as these announcements come on top of each other, President Trump has indicated that he might impose an additional 10 percent tariff on another $400 billion of US imports from China if Beijing carries out its retaliation.

Continuing down this tariff threat path will be self-destructive for both sides. China’s tariff response would cost American sales to a major, growing export market. American farmers, workers, and businesses—innocent victims of this standoff—are sure to suffer. The two sides need to pull back from confrontation and establish a negotiating framework to resolve their mutual concerns. They should put their tariff threats on ice.

1. Due to the unavailability of Chinese import data at detailed product level, we matched the product codes covered by the Chinese tariff lists with US exports data to China in 2017 published by the USITC. Publicly available US export data only concords to Chinese import product codes at the 6-digit level of the Harmonized System (HS). This approach therefore reduces the 659 8-digit Harmonized System products published by China on June 15 to 469 HS 6-digit products. Note that of these 469 HS 6-digit codes, US exports to China under 161 HS 6-digit codes in 2017 were zero. Therefore, our dataset indicates that only 308 HS 6-digit US exports covered by China’s June 15 list were positive in 2017.

3. Values of such products are calculated using HS 120190 (soybeans), HS 10 (cereal), HS 03 (fish and crustaceans), HS 02 (meat and edible meat offal), HS 08 (fruits and nuts), HS 04 (dairy products), and HS 121410/90 (forage products). Notably, roughly $1 billion of US exports of pork and fruits and nuts are covered by both the Section 301 retaliation list of June 15 and the retaliation list that went into effect on April 2 in response to the US Section 232 tariffs on Chinese steel and aluminum.

4. On February 4, 2018, the Chinese government self-initiated antidumping (AD) and countervailing duty (CVD) investigations on US exports of sorghum (the same product covered by both China’s initial and revised Section 301 lists). MOFCOM announced preliminary antidumping duties of 178.6 percent on imports of US sorghum on April 17, 2018 and a preliminary anti-subsidy duty of 19.6 percent on April 24, 2018. Yet on May 18, 2018, MOFCOM terminated AD and CVD investigations.

Trump has two major advantages. First, we are a consumption economy and China is an export economy. Second, we have a trade deficit with China. That means in a trade war with China the USA has all the big guns.

As a consumption economy our problem in a trade war is to replace products while China must find a new market. Most of the products we need to replace we have made ourselves in the past and are perfectly capable of making again. And we have the rest of the world to draw from. China on the other hand has a much more difficult problem. Where do they find a market as large as us? Likely they do not.

The trade deficit again works for us and against China. Trump put tariffs on $50 billion of imports from China. China responded. Trump proposed an additional $200 billion. China can not respond in kind. We export $130 billion so after they respond to Trump’s first round they are left with only $80 billion in-tariffed.

The only outcome that works for the status quo is that China intimidates Trump into backing off. Otherwise two possible outcome work for us. First, China backs down and gives us free access and quits stealing our intellectual property resulting in real free trade or we start making things for ourselves. Either way we win. American Exceptionism at its best.

The only way we lose it not to support Trump.

I am happy that Mr. Murphy has visited this site, which provides excellent updates on Trump's Trade Folly.  If the President continues this nonsense with the rest of the world, China will have an increasing number of trade partners that are fed up with his efforts to destroy the global trading system.  The damage also extends to US exports.  Ask US soybean farmers how great Trump is for eliminating their biggest export market, and ask US steel and aluminum using industries that export their final products how they enjoy losing their competitive due to his tariffs.  As for China's intellectual property violations, a smarter negotiator would have gathered together the rest of the world to join forces and sanction China on a comprehensive and unified basis.  In the meantime, happy trolling, Mr. Murphy.

This reasononing puts a lot of stock in the assumption that the CPC won't allow their people to suffer in the short term simply to prove a point. History doesn't support that assumption....

This is not just a trade war Trump is waging with China.  We are involved in a trade war on multiple fronts (Europe, Canada and Mexico).  Multifront wars usually don't do well during armed conflicts and I would assume the same may apply to trade wars?  But, fortunately trade wars are easy to win!  This coming from someone that has never fought one.

Will a US-China Trade Deal Remove or Just Restructure the Massive 2018 Tariffs?