The Outlook for Market Economy Status for China

In a previous post, we highlighted a litigation battle that could reach the World Trade Organization (WTO) by the end of this year over granting market economy status (MES) to China. This post updates with recent developments. Though many countries in the Asia-Pacific have granted China MES, several major trading partners have not, most notably the United States and the European Union. The classification of market versus nonmarket economy (NME) is important to China as it affects how Chinese firms are penalized in antidumping (AD) cases. China remains the top target for AD cases brought by the United States, the European Union, and collectively, worldwide.

While AD duties were originally designed to thwart predatory pricing—selling abroad at a lower price than at home—the legal definition of dumping has been significantly enlarged to cover other cases, notably instances where the foreign firm sells abroad below its full cost of production. Since sales below full cost of production are common in a market economy, many observers now view AD duties as legalized protection.

Given the current climate of skepticism toward trade, as well as domestic criteria (listed below) that must be met to confer an MES label on China, it seems unlikely that either the United States or the European Union will reach the political consensus to grant China MES by the end of 2016. Whether other Chinese trade partners like Canada, Japan, India, and Mexico will do so is an open question.

Under Article 15 of China’s Protocol of Accession to the WTO of 2001, WTO members are authorized to use “nonmarket economy” methodologies to calculate dumping margins—which determine the penalty imposed on Chinese producers—if Chinese firms cannot prove that market economy conditions prevail in the relevant industry.1 Countries that classify China as an NME are entitled to disregard Chinese prices and costs and instead use external benchmarks, normally prices and costs in another country, to calculate the dumping margins—this practice generally leads to much higher duty rates (for example, see GAO 2006).

A clause in Article 15 says NME provisions shall expire “15 years after the date of accession,” in other words, December 11, 2016. China contends that, after the December deadline, WTO members can no longer use NME methodologies in AD cases. Official EU lawyers may agree, but many private US lawyers disagree that expiration of the clause means automatic recognition of MES. They stress the argument that China must first comply with the domestic law requirements of the importing WTO member before China is entitled to MES.

US and EU Procedures

US antidumping law defines a nonmarket economy as any country that “does not operate on market principles of costs or pricing structures, so that the sales of merchandise in such country do not reflect the fair value of the merchandise” (19 U.S.C. §1677). Under current law, the Department of Commerce decides a country’s status—the Congress does not have to approve, although there have been attempts to constrain administrative discretion and subject an MES decision to congressional approval. Under current practice, Commerce considers “not only the extent to which the government has receded from state planning…but also whether market forces are firmly rooted in the economy.”2 Specifically, Commerce evaluates six statutory criteria  to determine a country’s status:

The United States has 98 AD duty orders in place against China, which account for 37 percent of all US AD cases (see figure). China is the biggest target by an exceptionally large margin; Taiwan comes second at 21, followed by India, Korea, and Japan, with 15 each.3

Top five target countries of US antidumping duties, as of January 14, 2016 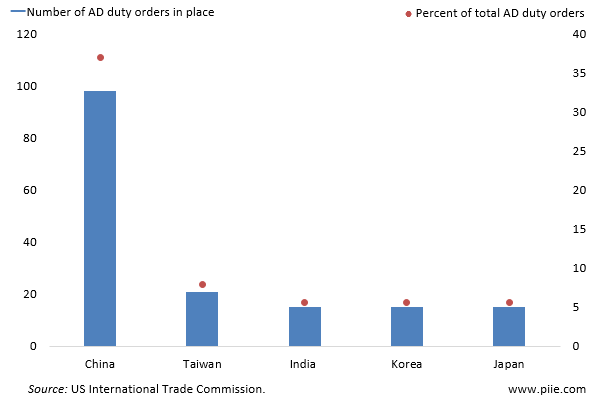 In the European Union, similar but distinct criteria must be met based on antidumping regulation No. 1225/2009. To change the policy with respect to China, a proposal from the European Commission must gain the approval of the European Parliament and the European Council. The European Union has 52 AD measures in force against China, covering 1.4 percent of EU imports from China, primarily in steel, mechanical engineering, chemicals, and ceramics (EC 2016).

At an administrative level, US and EU decisions may diverge since the Commission’s legal services division has determined that the European Union is legally obligated to grant China MES under WTO rules. In recent remarks, EU Trade Commissioner Cecilia Malmström emphasized that the question under debate is strictly legal in nature, owing to the 15-year deadline in China’s Protocol of Accession, not whether China meets the standard of a market economy. Of course, either the European Parliament or the European Council might disagree.  Moreover, Malmström noted that it is “politically unrealistic” to grant MES without parallel “mitigating steps” to dampen the impact on affected industries—such as eliminating the European Union’s “lesser duty rule” or bolstering antisubsidy enforcement.4 A Commission analysis found that graduating China to MES could cost 30,000 to 77,000 jobs in the short term and as many as 188,000 in the long term, due to a reduction of average AD duties by 27 percentage points and the consequent increase in Chinese imports.

Industries on both sides of the Atlantic flatly oppose MES designation. In February 2016, thousands of steel workers protested in Brussels, calling on the European Commission to deny MES. A spokesperson for industry alliance AEGIS Europe emphasized the unfair competition facing EU industries: “China is financing overcapacity, which leads to overproduction, which leads to selling below reasonable prices, below the cost of production. Nobody can compete with that.” In the United States, US manufacturers including steel, aluminum, and textiles formed a coalition, Manufacturers for Trade Enforcement, in March 2016 to oppose MES for China. In a press release, the group contended that “state support of domestic manufacturing in China has distorted global markets, leading to significant oversupply and other issues that are hurting domestic manufacturers” and granting MES would put “jobs at risk by limiting U.S. manufacturers’ ability to seek remedies for unfair trade practices by Chinese firms.” The political pressure comes in the wake of global outcry over Chinese steel overcapacity—Mexico’s economy secretary called for a coordinated effort between the United States, Canada, and the European Union to “react violently” through tariffs or other measures if China fails to cut back production.5

Come December 11, 2016, it seems unlikely the United States will grant China a change in status, based on the Department of Commerce’s interpretation of the six statutory criteria. The European Commission may diverge from the US decision and propose a change in status; however, it will be difficult to convince skeptical member states represented in the European Council or the European Parliament. In any event, European parliamentary and Council votes on any proposed legislation are not likely before mid-2017.

China has a history of challenging US trade remedies and there is no reason it would not do so again.6 A continuation of NME status will almost certainly prompt China to initiate WTO litigation. China could file a case within a week of the December deadline, claiming that US failure to confer MES amounts to an “as such” violation of WTO rules, even prior to a new AD case evaluated under the NME procedure.7

If China brings an “as such” case, given recent lags at the WTO for forming panels and resolving cases, the year 2019 or 2020 would seem to be the earliest date for a final decision by the WTO Appellate Body. Even if the Appellate Body rules against the United States, China would not receive retroactive refunds for any AD duties collected under NME procedures prior to the ruling. However, China would likely retaliate in opaque ways against US exporters and investors.

The threat of a WTO case is unlikely to deter the United States. However, the United States could adopt a “mix and match” approach, whereby MES is approved for certain industries on a case-by-case basis. But US denial of full-fledged MES would resonate strongly in China, particularly if the European Union and other major countries accord MES fairly soon. Canada and Japan have their own procedures for granting a change in status. Japan’s antidumping guidelines include an amendment to abide by the December deadline but such guidelines are not legally binding. Moreover, Japan’s decision has less economic impact since Japan is not a widespread user of AD remedies. Canada’s antidumping law at one time acknowledged the December deadline, but this requirement was repealed in 2013. In any event, Prime Minister Justin Trudeau may decide that MES is a small price to pay for better Canada-China commercial relations.

The United States may in the end lose more than it gains from withholding MES. US-China broad commercial relations would likely suffer in exchange for a targeted benefit to US industries that back AD proceedings under current NME procedures.

1. Specifically, Article 15(a)(ii) states, “The importing WTO Member may use a methodology that is not based on a strict comparison with domestic prices or costs in China if the producers under investigation cannot clearly show that market economy conditions prevail….” Article 15(d), the source of the controversy, then goes on to say “Once China has established, under the national law of the importing WTO Member, that it is a market economy, the provisions of subparagraph (a) shall be terminated provided that the importing Member’s national law contains market economy criteria as of the date of accession…the provisions of subparagraph (a)(ii) shall expire 15 years after the date of accession.”

2. In a 2006 review, the Department of Commerce found China did not meet the criteria.

3. China is also the top target for US countervailing duties, accounting for 32 duty orders in place out of a total of 63.

6. One such challenge involves the US practice of “double remedies,” whereby Chinese producers are penalized twice through the parallel use of countervailing duties on top of antidumping duties; the former is not expressly permitted by WTO under NME criteria. Another involves the use of “specific rates” whereby all Chinese producers face a prohibitively high “all country rate” if they cannot individually prove that they are not under the influence of the Chinese government.

7. In an “as such” case, the complainant argues that the respondent’s law on its face violates the respondent’s WTO obligations and consequently chills trade through its prospective application.

Assessing the Strategic and Economic Dialogue