President Donald Trump announced on September 17 that he plans to slap tariffs on another $200 billion of imports from China starting September 24. China stated it would retaliate, which will undoubtedly provoke Trump to threaten yet another round. He has made clear his intention to impose duties on all US imports from China very soon.

Trump’s latest tariffs come in addition to those he has already imposed on over $100 billion of imports, including on steel, aluminum, solar panels, washing machines, and the initial barrage of $50 billion of products from China. On September 18, the Chinese government announced the details of how it would retaliate against an additional $60 billion of US exports.

Once the September 24 tariffs go into effect, Trump will have imposed new trade restrictions on 12 percent of US imports during 2018 alone. The combined trading partner retaliation stemming from Trump’s 2018 tariff collection will cover over $125 billion, or 8 percent, of US exports.

Most tariffs are costly, but the newest levies will hit a different mix of goods. To date, Trump’s tariffs have mainly worked to raise costs for American businesses. The new rounds of tariffs will increasingly target American consumers directly through the goods that they buy. And China has mixed it up as well: Its initial restrictions shut out American agriculture and car exports, and it is imposing new tariffs at moderate levels that will be costly to American suppliers of inputs and capital equipment.

Trump is imposing these tariffs on imports from China under Section 301 of the Trade Act of 1974. In August 2017, his administration initiated an investigation into China’s unfair trade practices. In March 2018, the US Trade Representative (USTR) issued its report, alleging problems with how American companies were being treated in China. Concerns included being forced to form joint ventures with local Chinese firms and share their technology; theft, or insufficient remuneration for use of their intellectual property; and China’s Made in China 2025 industrial policy.

Because China announced it would retaliate with tariffs of 25 percent on $50 billion of US exports, on June 18, Trump demanded a second list of products with new tariffs of 10 percent on $200 billion of imports. The USTR published this product list on July 10. Trump then indicated on August 1 that he would increase the tariff on those products to 25 percent. The list went through a round of public hearings in August and was revised slightly. On September 17, the USTR announced Trump’s new tariffs on $200 billion of imports—phase 2—would go into effect on September 24 at a rate of 10 percent, which would be increased to 25 percent on January 1, 2019.

In his September 17 announcement, Trump also confirmed his “phase 3” plan by stating “if China takes retaliatory action against our farmers or other industries, we will immediately pursue phase three, which is tariffs on approximately $267 billion of additional imports.” Trump had already threatened this on July 20 in an interview with CNBC.

Trump summarized his tariff approach toward China on September 7 with, “we’ve taxed them $50 billion—that’s on technology. Now, we’ve added another $200 billion. And I hate to say this, but, behind that, there’s another $267 billion ready to go on short notice, if I want.”

Which products were shifted from the $200 billion to the $267 billion list?

The Trump administration dropped nearly 300 products from the original $200 billion list of 6,031 products announced on July 10. Put differently, these products were shifted from the $200 billion list to the potential phase 3 list of $267 billion. The products given a temporary reprieve covered an estimated $19.7 billion of US imports and included household goods like gloves, bedsheets, as well as reportedly smartwatches such as the Apple Watch and Fitbit.

Figure 1 illustrates the product composition of Trump’s tariff lists. He applied his first set of tariffs to "technology," in the form of duties targeting intermediate inputs and capital goods. These tariffs will increase the costs of American businesses as they struggle to remain competitive in the global marketplace relative to companies in other countries that do not face such tariffs. But Trump’s latest phase 2 and his potential phase 3 tariffs increasingly target consumer goods. American households will soon be footing the bill for Trump’s trade policy in the form of higher prices. 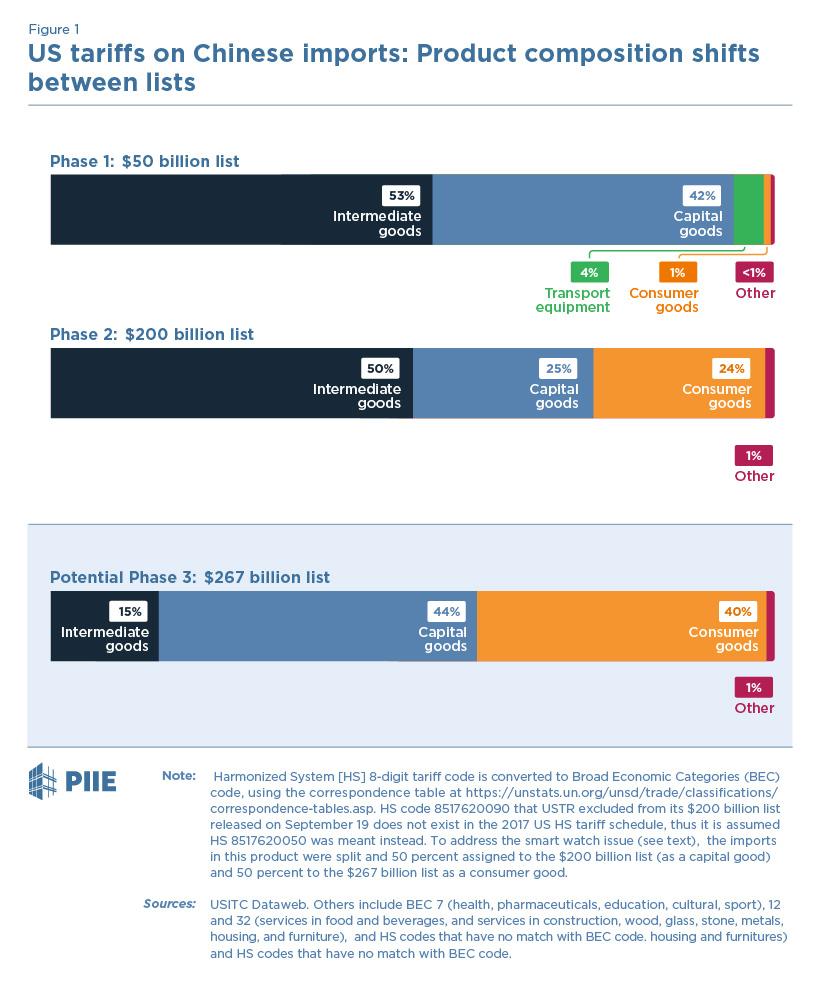 Figure 2 illustrates China’s three lists of products—albeit Beijing has not indicated that it would impose tariffs on the remaining set of imports from the United States that are not on its first two lists. China’s initial, $50 billion list of tariffs covered $48.0 billion of US exports in 2017 and focused on American exports of cars (classified as other), as well as soybeans, pork, fruits, nuts, and other agricultural products (classified as intermediate goods). Trump subsequently has attempted to quell the outcry of injured American farmers with subsidies of up to $12 billion. 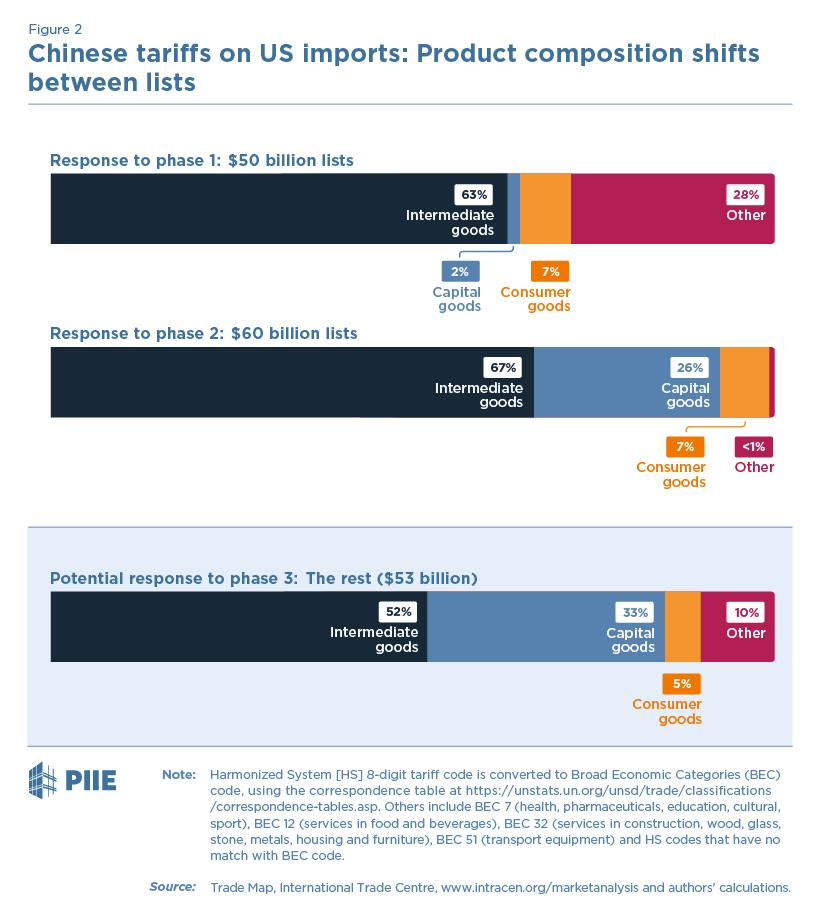 China’s latest tariffs on $60 billion of imports increasingly shift into covering intermediate inputs and capital equipment. Beijing likely recognizes the costs to its own companies that arise when raising the price of key components, and that is why it is keeping some of them low at only 5 percent.

Trump telegraphed this round of tariffs on April 5, 2018. Roughly 48 hours after issuing his first $50 billion tariff threat, when he became frustrated that China had both not caved and had the audacity to retaliate with tariffs of its own, he issued a statement indicating “[r]ather than remedy its misconduct, China has chosen to harm our farmers and manufacturers. In light of China’s unfair retaliation, I have instructed the USTR to consider whether…additional tariffs would be appropriate under section 301 and, if so, to identify the products upon which to impose such tariffs.”

For Americans who import, and Americans who export, Trump’s trade policy is proving increasingly costly. Trump’s phase 3 tariffs on the remaining $267 billion of imports from China now also seem predetermined, given that China seems set to retaliate on $60 billion of US exports.

Although some members of his administration have attempted to restart talks with Beijing, Trump himself has rarely weighed in on the prospect and importance of negotiations. Unlike his frequent tweets and commentary about tariffs, Trump has not articulated exactly what he wants from China, or how he wants to achieve it. Until the president himself engages on this very critical question, his administration’s only likely outcome seems the costly and destructive path of tariffs.

1. The July 10 list covered 6,031 products at the HS08 level ($196.1 billion, revised from $195.9 billion), and the September 17 list covers 5,745 products at the HS08 level ($176.4 billion). Thus, 286 HS08 products were dropped. Furthermore, within certain HS08 product categories, 11 HS10 subproducts were also dropped. Finally, one HS10 subproduct category—8517620090—does not exist in the available data, and so we assume it was 8517620050, which was $22.4 billion of imports from China in 2017. This is the category that contains smartwatches like the Fitbit and Apple Watch that were reportedly excluded from the tariffs, i.e., according to the USTR notification, “switching and routing apparatus, and modems of a kind used with data processing machines of heading 8471 will be subject to additional duties. Other products will not be subject to additional duties.” Thus we split the $22.4 billion of US imports from China in this category in half, assigning 50 percent to the $200 billion tariff list (as “capital goods,” switches and routers) and 50 percent to the $267 billion list (as “consumer goods,” i.e., Fitbits and Apple Watches).