Why Has Trade Stopped Growing? Not Much Liberalization and Lots of Micro-Protection

For six decades after the Second World War (1945 to 2005), unprecedented growth of trade in goods and services and spectacular expansion of foreign direct investment (FDI) were powerful drivers of the best half-century in human history. Global trade maintained an annual growth rate of 6 percent in real terms, while the global stock of FDI grew at 15 percent annually in nominal terms between 1980 and 2005. Figures 1 through 4 portray the growth of trade and investment expressed both in current dollars and as percentages of world GDP. The intertwined expansion of trade and investment propelled annual growth of 4 percent in world GDP, lifting billions of people out of abject poverty in developing countries and delivering a comfortable life style to hundreds of millions of people in advanced countries.

But following the Great Recession of 2008–09, global trade and FDI performance did not resume their accustomed growth rates, unlike in the aftermath of previous recessions (figure 1). Four years of flat or declining world trade to GDP ratios were experienced between 1974 and 1978, six years between 1980 and 1986, two years between 2000 and 2004, and now seven years and counting since 2008. This is the longest postwar period of relative trade stagnation. 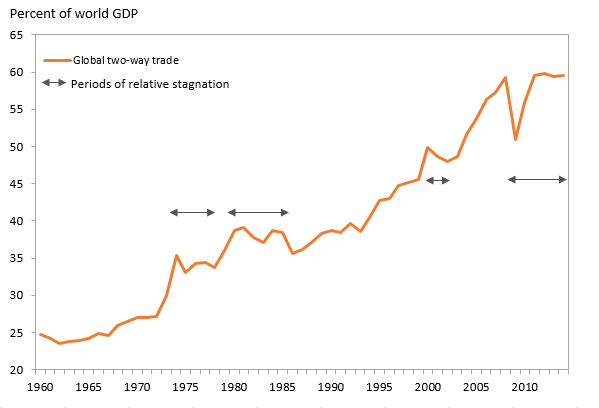 Since 2008, the ratio of world trade to GDP has remained just under 60 percent. After a quick recovery in 2010 from the sharp fall in 2009, the annual growth of global exports has been stuck at less than 3 percent, about the same growth rate as world GDP (figure 2). World FDI stocks are still growing relative to world GDP (figure 3), but new FDI flows show a worrisome decline (figure 4). FDI flows fell from a peak of $1.9 trillion in 2007 to $1.2 trillion in 2014. 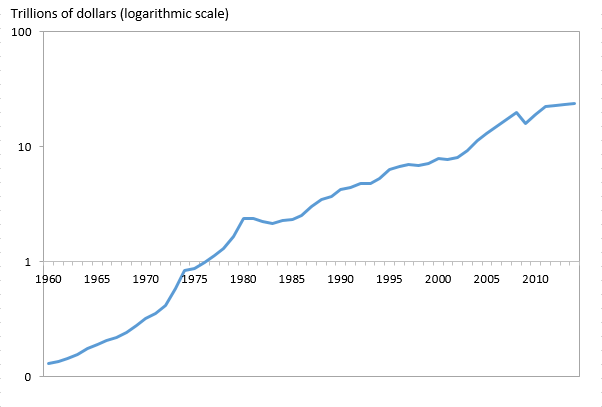 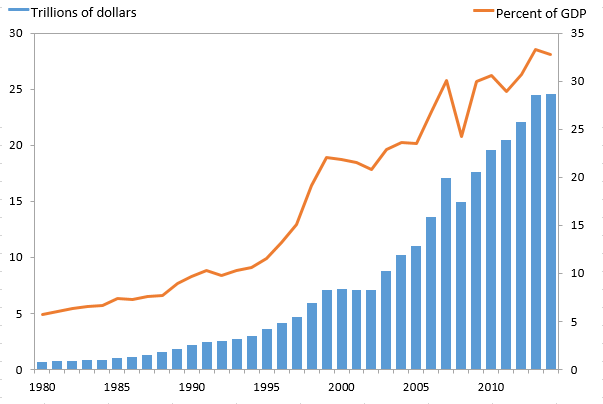 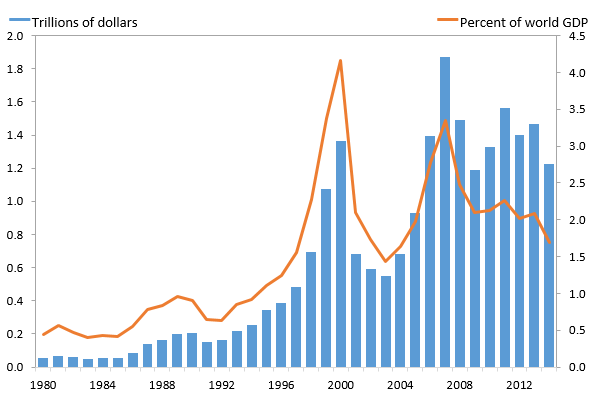 Why have global trade and investment not rebounded as they did after past recessions? This blog post will argue that both the absence of liberalization and the eruption of micro-protection have been major contributors to weak trade and investment performance. This diagnosis is in accord with Evenett and Fritz (2015), while it contrasts with other analyses that stress cyclical and structural factors.1

Unless the three T-talks—the Trans-Pacific Partnership (TPP), the Transatlantic Trade and Investment Partnership (TTIP), and the Trade in Services Agreement (TiSA)—are soon concluded and ratified, relative stagnation will endure at least through 2020. In today’s political climate of skepticism toward liberalization and opposition to globalization, the prospects for resuming 6 percent world trade growth and $2 trillion annual FDI outflows seem distant.

When prior GATT rounds were concluded, new ones were launched, creating fresh bursts of liberalization. True to this pattern, but with a longer delay (owing to the “battle of Seattle”),2 the Doha Round of Multilateral Trade Negotiations was launched in 2001. However, Doha talks spluttered to a standstill 15 years later, as India, Brazil, South Africa, and many other developing countries refused to lower their barriers in agriculture and nonagricultural market access (NAMA). Instead these countries fight to preserve their farm subsidies, tariffs, and tariff rate quotas. If agriculture and NAMA terms could be agreed, the potential real income gains could reach $100 billion annually, but these gains remain out of sight.3

The Nairobi Ministerial conference held in 2015 confirmed that ambitious hopes for the Doha Round are, for the moment, beyond reach. Advanced countries, led by the United States and the European Union, are instead seeking alternative paths, namely plurilateral and sectoral negotiations.4

Following the Uruguay Round, the most significant liberalization on a global scale was China’s accession to the World Trade Organization (WTO) in 2001. Accession required significant cuts in Chinese tariff and nontariff barriers, just as China was escalating its trade profile from 3.4 percent of world imports in 2000 to 9.1 percent in 2010. But, like other emerging countries, China refused to lower its remaining barriers at the Doha Round bargaining table. As an alternative, President Obama concluded free trade agreements (FTAs) with Korea, Colombia, Peru, and Panama, while other countries signed their own FTAs. However, on a global scale these FTAs did not deliver significant new liberalization in goods, and they did practically nothing in services.5

In the wake of the Great Recession of 2008–09, micro-protectionism has run rampant, often skirting the letter of WTO rules. This phenomenon is driven by political promises to create more jobs and to protect domestic firms and industries, notably evident in Buy America statutes and copy-cat local content legislation across the globe. As an illustration, table 2 reports that the imposition of 117 local content requirement measures identified since 2008 is estimated to affect $928 billion of global trade in goods and services in 2010, perhaps reducing global exports by $93 billion.6

Local content requirements are just one form of trade restrictive measures introduced since the Great Recession. The Global Trade Alert, under the leadership of Simon Evenett, has recorded more than 3,500 new protectionist events since 2008—many by G-20 countries, even though they repeatedly promised to abstain. The top 10 countries imposed a large number of new harmful measures in 2015, including G-20 countries such as Russia (65 measures), India (55 measures), and the United States (51 measures). Identified measures include direct import restrictions, public procurement discrimination against foreign firms, export taxes and quotas, and trade distorting subsidies. Macroeconomists are wrong to dismiss the quantitative importance of these poison pills, perhaps individually small but collectively deadly. The fact that highly visible tariff barriers have not been erected on a large scale does nothing to diminish the cumulative impact of thousands of opaque measures designed to keep out imports.

Contrary to some observers, the well of potential trade expansion is far from running dry.  Simple calculations illustrate just how much trade might be expanded if barriers were lowered.  Manufacturing tariffs are among the lowest in the world but are still significant, averaging 6.8 percent.7 Inefficient customs procedures and inadequate ports and airports add costs amounting to another 13 to 18 percent on an ad valorem basis.8 Obviously these barriers—and much higher walls against services trade—retard international commerce.

The WTO (2015) estimated the reduction in trade costs and the growth of global exports and GDP that could result from the ratification and full implementation of the Trade Facilitation Agreement (TFA). Table 3 shows WTO calculations from two different models—a gravity model and a computable general equilibrium (CGE) model. The gravity model indicates that annual global export gains could range between $1.1 trillion and $3.6 trillion. The CGE model indicates that annual world exports could grow by 2 to 3 percent, and world GDP growth could be 0.3 to 0.5 percent faster.

The story is even starker for trade in business services. Data compiled by J. Bradford Jensen reveal that if business services, which are perfectly tradeable, were sold abroad to the same extent as manufactured goods, US exports of business services would amount to 20 percent of sales (see Hufbauer, Jensen, and Stephenson 2012). But actual US exports of business services amount to under 5 percent of sales. Sky-high barriers to trade and investment in business services explain the yawning gap. National barriers to services trade are often equivalent to 40 percent or higher tariff rates (see Hufbauer et al. 2015).How much difference would radical liberalization make to the global flow of goods and services? Just taking the United States for illustrative purposes, US exports plus imports of manufactures amount to about 146 percent of US manufacturing value added. By contrast, US sales and purchases of manufactures (excluding export sales and import purchases) amount to 425 percent of manufacturing value added. The implication is that domestic trade in manufactures—the shipments back and forth of intermediate components as well as final sales that make up domestic value chains—bear a much higher relation to value added than international trade. By implication, considerable room for the expansion of international trade remains.

Similar arithmetic illustrates the scope for expanded FDI. Countries other than the United States account for 77 percent of the world economy. But outward FDI stocks controlled by US firms—now some $4.9 trillion—account for only 25 percent of the book value of S&P 500 firms ($19 trillion in 2015).9

These statistics are not meant to suggest that another half century of globalization would turn the world economy into a giant version of the US economy in terms of the density of trade flows and investment stocks. But they do indicate the vast scope for future expansion—even when short-term business cycle conditions are unfavorable—provided that trade and investment policy liberalization resumes the brisk pace over the next 50 years that it enjoyed between 1945 and 1995.

Right now, the odds of that happening seem low. The slow pace of wage growth for median income households in advanced countries, coupled with the sluggish world economy, have fostered skepticism towards further liberalization. Visceral aversion to freer trade and global investment is evident in the presidential campaign, particularly in the pronouncements of Donald Trump and Bernie Sanders. On the other side of the Atlantic, similar voices are critical of TTIP, fearing that US products would undermine European standards. Political opposition does not, however, represent the views of median voters. US opinion polling suggests that popular support for the TPP outweighed opposition as recently as the spring of 2015.10 In Europe, support for TTIP exceeded opposition by more than two to one in 2014.11 However opponents of globalization are more focused and vociferous than supporters, and for the next five years they may succeed in derailing both the TPP and TTIP. Among developing countries, the liberalization leaders are small countries, such as Chile, Colombia, Botswana, and Ghana, not the major players like Brazil, China, India, Indonesia, and South Africa.

Given this outlook, even if central bankers and finance ministers magically pull prosperity out of a hat, the prospects for resuming 6 percent trade growth and $2 trillion annual FDI outflows seem distant.

3. See Adler et al. (2009). In a similar vein, Bouët and Debucquet (2009) calculated that global exports of agricultural products would increase by 5.5 percent from their baseline level by 2025 if the Doha Round could be concluded.

4. USTR ambassador Michael Froman called for such alternatives to Doha Round talks at the Nairobi conference. See “Froman Warns of WTO Irrelevance If It Does Not Leave Doha Round Behind,” Inside US Trade, December 18, 2015.

7. This figure is the average applied tariffs on manufactured goods in 2012 from the World Bank’s World Development Indicators database. Manufactures generally face far lower tariffs than agriculture but are much more important in world commerce.

9. The great preponderance of outward FDI by US multinational corporations is carried out by firms on the S&P 500 list.

10. See Jacob Poushterp, “Americans favor TPP, but less than those in other countries do,” Pew Research Center, June 2015.

Trump's phase one trade deal with China and the US election