The Trump administration is reportedly considering a change in the way it calculates bilateral trade deficits. The stated goal is to end an alleged distortion that understates the US trade deficit, and thereby help the administration make better trade deals, defined as ones that reduce the deficit. You could call this proposal an “alternative calculation.” In fact it is just as bogus as the notorious “alternative facts” emanating occasionally from the White House.

The rationale for the proposed change was laid out in a recent letter to the Wall Street Journal, from Peter Navarro, head of the new National Trade Council, who claimed that the Census Bureau’s trade data “overstate exports by counting foreign-made products as US exports.” He argues that goods imported and then re-exported with no value added should not be calculated as exports at all.

Separating these so-called re-exports from total exports would seem rational. But using such data for trade balance calculations is problematic. In principle, it could make sense to exclude from the export side those goods that are imported and shipped overseas without any significant value added in the United States. But for a trade balance calculation, whether bilateral or aggregate, you must compare apples to apples. The new calculation would subtract re-exports from the export data, but not from the import data, which are not constructed to allow such a modification. The result is a superficially but misleadingly enlarged trade deficit on aggregate and for many important trade partners.

Until now advocates of the change have been trade alarmists like Senator Bernie Sanders and Public Citizen. The Trump administration is thus taking a leaf from the book of the most protectionist elements of American politics.

In defending his proposed change, Navarro states that “you cannot manage what you do not accurately measure.” A bigger concern for the American public is the possibility of wrong decisions based on data massaged with the purpose of making just such a decision. Improving data quality is always important, and the Census Bureau and other agencies tasked with compiling economic data strive to gather and distribute the most accurate data and statistics. But data decisions should be made by experts at these agencies and not become politicized. White House intervention in standard economic computations poses a wider danger of reducing the credibility of all US economic statistics and limiting the scope for evidence-based policymaking.

There are other reasons why the proposed change in calculating deficits is flawed.

Excluding re-exports doesn’t get at US value added. And bilateral deficits don’t matter.

Navarro is particularly interested in excluding re-exports from bilateral deficits to more accurately capture US value added in trade with Canada and Mexico. But his proposed calculation does not achieve this goal. Trade is measured in gross terms and excluding re-exports does not change that measure. For example, if Canada exports auto parts to Mexico, which Mexico assembles into cars and ships to the United States, the United States could have a trade deficit with Mexico and a surplus with Canada, even if 95 percent of the value of the imported cars were Canadian.

Trade economists, along with international organizations, are exploring new ways to estimate “value-added” trade to better understand supply chains. But excluding re-exports (as defined in US trade statistics) from trade does not contribute to greater clarity. In the car example above, none of the trade flows would be defined as re-exports, yet Mexico’s value-added exports (the 10 percent of the value of the cars) to the United States would be vastly different from their domestic exports (the full value of the cars).

The administration’s fixation on bilateral deficits is perplexing to economists. Economists disagree over the significance of the aggregate trade deficit for the US economy, but nearly all economists view concern over bilateral trade deficits as misplaced.

Generally accepted economic analysis holds that the aggregate trade balance is equivalent to the difference between saving and investment, but there is no such identity for bilateral deficits. The focus on bilateral deficits is political, because governments often interact on an individual basis. From an economic standpoint, some countries are always likely to purchase more from various other countries, just as some businesses purchase more goods from others.

What precisely is the problem?

A main reason why the Navarro proposal cannot work has to do with the data. Simply put, the data on the imports do not mirror the data on exports. Five trade data series available from the Census Bureau are:1

Imports for consumption are overstated because the customs administration has no way of knowing if goods entering the United States will later be consumed or re-exported. A more accurate label for that category would be “imports through customs.” Some other countries call this category “special imports,” which could also help avoid any misinterpretations.

If re-exports were accurately captured in import and export data, the alternative methodology would yield the same aggregate trade balance as the existing one. Comparing the standard calculation with the alternative calculation, using aggregate data, thus shows the magnitude of the bias.

The bias is huge. Using current methodologies, the aggregate US merchandise deficit in 2016 was $735 billion. The administration’s proposed methodology would drive the deficit up to $946 billion. The difference is also growing. Despite a larger merchandise trade deficit in 2005, the difference between the two measures was less than $100 billion, as compared with the over $200 billion today (figure 1). Using these data for bilateral trade balances imply that $200 billion of fake deficit would be distributed among our trade partners. 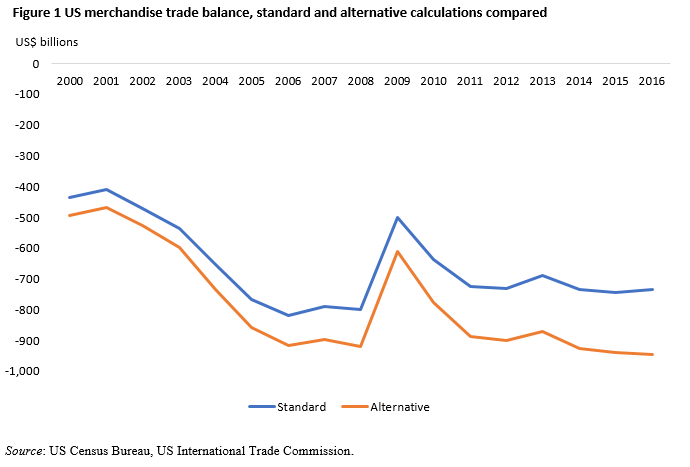 But maybe this is just a problem for a handful of products? 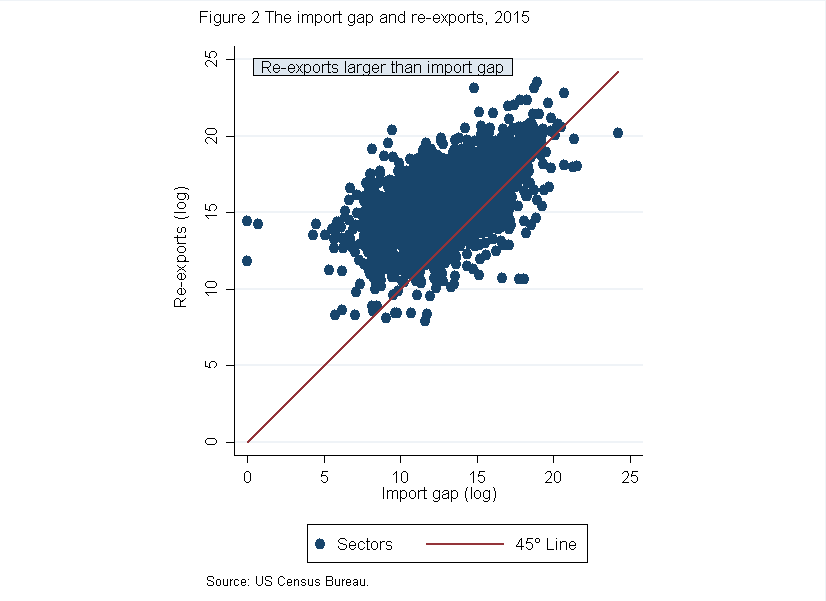 Why is there such a big difference?

The answer is revealed by examining the cases where the divergence between the import gap and re-exports is greatest. These are products that were imported into the United States, passed through customs, but were exported instead of consumed. Table 1 shows the top 30 products, which together account for about half of the difference between the two measures.3

The top product on this list is diamonds. As the largest market in the world for diamonds, the United States also serves as a distribution hub. Worked nonindustrial diamonds are imported and many are later re-exported.

Why would diamonds pass through customs only to be re-exported? The tariff on diamonds is zero, so there is no cost to bringing them in. Some may be modified slightly, such as by appraisal or polishing. Because the diamonds are not produced in the United States and their condition is not significantly changed by US producers, they count as re-exports. Other gems, such as rubies and emeralds are also on the list of top products, as are art and jewelry. For many of these products, the divergence in the data can also arise because of timing and appreciation. If diamonds enter one year, and prices go up and then they are exported, the appreciation happens in the United States, but the item remains a re-export, even though the speculative gain accrued in the United States.

Aside from gems, other products that loom large in creating the discrepancy are related to supply chain trade. Examples include machine parts, semiconductors, and wiring sets for cars. Why would such products pass through customs only to be re-exported? It may be easier for large companies to bring in all products at one location and then distribute them, especially within regional supply chains.

It is worth noting that all products on this list contain some US value added embedded within them, in the contribution of logistics and services. These embedded values also contribute to jobs.

Most products on the list of large re-exports that pass through customs have zero duties, so taking advantage of US logistics makes sense. Figure 3 shows the share in the total difference between re-exports and the import gap by products in each tariff bracket. Sixty-two percent of the value comes from zero duty products and another 10 percent have duties less than 2.5 percent. While it is possible to get duties rebated for goods imported and then re-exported, the process is complex. 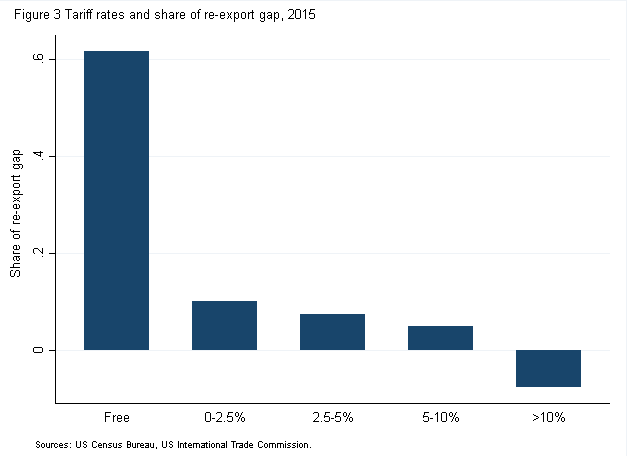 Is the growth in re-exports related to manufacturing supply chains or the gem trade?

It turns out to be both. Many of the products from table 1 are also the products that account for the growth in re-exports. See table 2, which shows the biggest growth products. Re-exports have been growing both in gems and in parts and components.

The most accurate calculation is the standard one

The results above show that imports for consumption should not be used to calculate the trade deficit. The most accurate methodology is gross exports less gross imports. While focusing on domestic exports may be useful to examine products where US producers contribute to physical value added, the data cannot be usefully combined with data on imports for consumption to calculate a trade balance in aggregate or bilaterally. Doing so creates $200 billion in exaggerated trade deficit on aggregate, which in bilateral calculations must be mistakenly attributed somewhere.

Bilateral trade deficits are already politicized enough, without expanding them using a biased calculation that produces a fake trade gap.

1. For more detailed descriptions, see USITC note on trade calculations and US Census which gathers the data.

2. Re-exports also includes goods in a customs bonded warehouse or US foreign trade zone (FTZ), as do general imports. Goods in an FTZ, with some value added will count as domestic exports.

3. Less than 5 percent of products record re-exports below the difference between total imports and imports for consumption (not shown).

Targeted by the United States, a Renewed Trade Response from the European Union

Will Auto Trade Be a Casualty of US-Japan Trade Talks?