We can be cautiously optimistic that Japan’s export volumes may finally be picking up, but this development has little to do with the yen’s gain in competitiveness.

Japanese exports were off to a sputtering start in early 2015. While encouraging January figures showed exports rising 17 percent from a year prior in value terms and even more importantly, 11 percent in volume terms, February’s provisional data was more of a letdown. 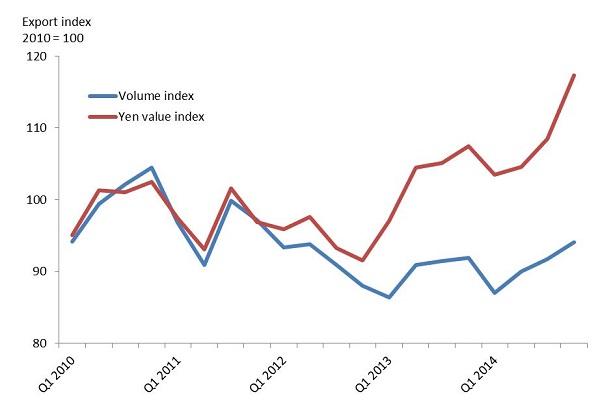 Nevertheless, the modest pickup in trade volumes exhibited since the last half of 2014 could hint the beginnings of a devaluation-driven export revival that many had anticipated (figure 1). Since the Abe administration came to power in December 2012 and the Bank of Japan (BoJ) began aggressive Quantitative and Qualitative Monetary Easing (QQE) measures, the yen has fallen roughly 26 percent in trade-weighted terms. Major depreciations can initially worsen trade balances due to the increasing price of imports, but exporters eventually respond by lowering the price of goods sold in foreign markets in order to gain both competitiveness and market share. That, at least, is the idea behind the so-called “J-curve” effect.

But two years into Abenomics, it is hard to say to what extent monetary easing has affected outgoing trade. Japanese exporters have undoubtedly reaped the benefits of the yen’s devaluation, but they have done so by pocketing the profits of a favorable exchange rate rather than selling more product via competitive pricing practices. The factors explaining this behavior are a mix of structural impediments and external demand shortfalls. They are also yet another reminder of how real world forces can muddy the elegant theoretical constructs in economics.

Why Hasn’t the Yen Passed Through to Export Volumes?

First, the yen’s depreciation has not passed though into export prices and, ultimately export volumes because most Japanese firm contracts are invoiced in foreign currency. Figure 2 illustrates Japan’s export price response to changes in the country’s real effective exchange rate (REER), which tracks the yen against a trade-weighted basket of partner-country currencies. The figure shows that while export prices in yen terms swing with the REER, the contract currency price of exports changes little. Indeed, there is a downward price trend in line with what we should expect, but it is difficult to observe any substantial effect from recent monetary easing. 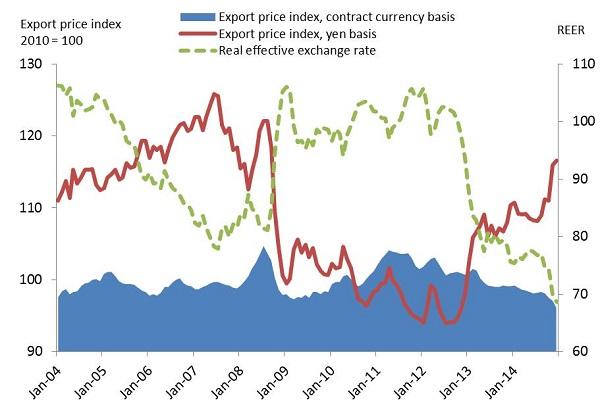 In a 2009 firm-level survey, Ito et al. (2013) find that Japanese manufacturers invoice less than 30 percent (a weighted average) of their export contracts in yen, instead, heavily opting for the importer currency in advanced markets like the United States, Canada, and the Euro area.1 Invoicing decisions are driven by Japan’s increasingly complicated global supply chain. Intra-firm trade and, especially, transactions with Asian subsidiaries that ultimately sell into advanced third markets are denominated in the importer’s currency in part so that company headquarters can absorb exchange rate risks. This practice has kept prices in final markets sticky, notably in non-competitive or non-differentiated goods.

Closely associated with foreign currency invoicing is the relentless march of offshored manufacturing capacity, which has increased Japan’s home producer reliance on imported inputs from overseas subsidiaries. As Junko Shimizu and Kiyotaka Sato (2014) argue, expanding overseas production, in part a strategy to defend against swings in the exchange rate, “built a structure in which trade balance [sic] is unlikely to be improved by yen's depreciation.”2 Mary Amiti et al. (2014) at the New York Fed quantify this constraint by applying a study on Belgian firms to Japan’s case. They estimate that exchange rate pass-through, or the responsiveness of export prices to currency movements, is reduced by 6 percentage points for every 10 percent increase in a firm’s imports of variable costs.

As a case in point, we see that the yen’s depreciation essentially halted, or even reversed, consistent downward price trends on the input components that Japanese manufacturers need to produce final goods, since a sizable share are imported (figure 3). Clearly, it is difficult to cut output prices when you can no longer rely on cheapening input costs. This is especially bad news for the electronics sector, where product differentiation is minor and international cost-cutting competition fierce. 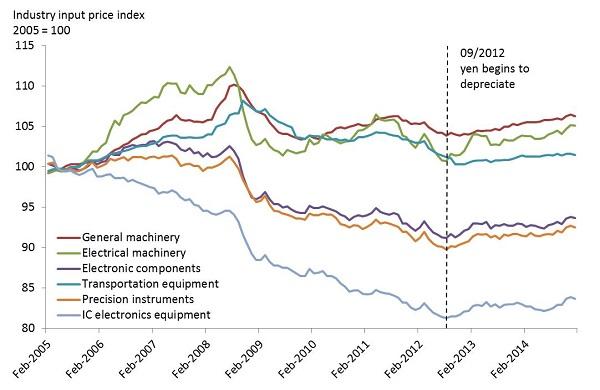 Not only are Japanese producers constrained by increasingly globalized supply and financing chains, but research shows that multinationals—inside and outside Japan—prefer to maintain prices and pocket profits in times of currency devaluations. The Financial Times provides a good summary of this research drawn from corporate behavior in Belgium, France, Italy, and Argentina. The profit-over-market-share decision may be related to higher product quality and the ability to differentiate goods, as Natalie Chen and Luciana Juvenal show in a study of the Argentinian wine industry. These findings are particularly salient for Japan and other mature markets where the quality of traded goods tends to be higher.

Finally, and  importantly, recent shortfalls in demand and real investment in external markets are major explanators of Japan’s lackluster export volume growth; similarly, this could also explain why trade has recently picked up. Breaking down Japan’s export volumes to major trading partners shows that demand for Japanese goods has largely been moderating along with China and the European Union’s slowdown in growth (figure 4). However, exports to the United States, for example, have picked up in recent months just as we have become more confident that consumer and business spending will accelerate. A recent HSBC report analyzing the determinants of trade in Asia finds that the export growth response to external demand is in general, ten times stronger than the effect of changes in the REER.3 Whether demand from abroad picks up or moderates going forward will undoubtedly provide most of the explanatory power for Japan’s export growth.

Figure 4 Japan’s export volumes as a function of external demand in the US, EU, and China 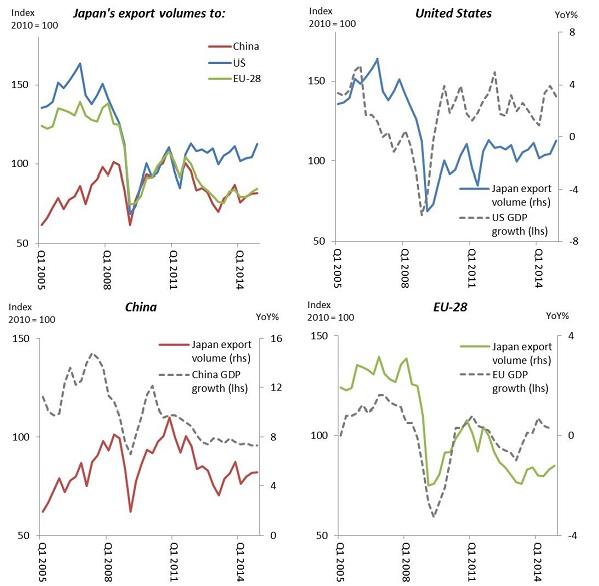 Is Japan’s Export Revival Around the Corner?

Currency devaluations can certainly affect trade developments; this is not controversial. But the extent and timing of the effect—which in practice, is of the most use to international policymakers—are far harder to capture. Researchers have found that Japan’s trade balance has been affected by past currency movements, but the impact is not overwhelming and may be deteriorating over time.4 It is also a force which likely takes years to build momentum. Marcus Noland (1989) finds evidence of the J-curve effect in Japan but with a lag of over two years.5

Now two years into Abenomics, a moderate export revival for Japan looks increasingly likely, but we should be careful to disentangle the exchange rate effect from exogenous forces. By early 2015, Japan’s trade balance had improved markedly since the country flirted with current account deficits in 2013 and 2014. The drop in the price of oil and natural gas, on which Japan is highly dependent, has certainly helped lower the cost of recent imports even though the full effect is not yet reflected in trade data. Moreover, demand from the United States and newly-industrialized Asian markets should hopefully keep Japan’s exports buoyant, even as growth in other major markets like China and ASEAN remains tepid.

As central banks around the world, including notably the European Central Bank, shift towards comprehensive monetary easing measures to address domestic concerns, it is important to acknowledge the byproduct effect on a country’s currency and, theoretically, foreign trade competitiveness. However, Japan’s muted export revival demonstrates that developments in trade dynamics are profoundly influenced by factors that go far beyond the relative competitiveness of currencies and must be evaluated as such. With the recent uptick in exports, Abenomics may yet begin to work its magic on Japan’s trade balance. But, as a mature market increasingly integrated into the global supply chain, the ability to explain Japan’s trade flows through currency movements alone is probably the weakest it has ever been.

4. See literature review and empirical results in Shimizu and Sato (2014).

Bank of Japan's policies have been a success

Yes, We Are Probably All Japanese Now