The free trade agreement (FTA) signed by Korea and China in late 2015 covers almost $300 billion in trade in goods and services, but it excludes several tariffs from full liberalization, including several manufacturing goods, such as automobiles, electronics, steel, and petrochemical products. The auto sector was a key issue for bilateral negotiations and the outcome a major disappointment. China and Korea agreed that autos and auto parts would either be excluded from their tariff reforms or subject to long phaseout schedules as “highly sensitive products.” Passenger vehicles (HS 8703) were excluded from tariff liberalization, with a few small exceptions. As a result, China maintains a 25 percent tariff on Korean automobiles; while tariffs range from 10 to 45 percent for auto parts such as mufflers. Korean companies like Hyundai and Kia already produce in China, but the maintenance of tariffs impedes their ability to restructure regional production efficiently.

The outcome is disappointing because the auto industry has been an engine of Korean economic growth. Korean global auto exports steadily increased, from $12 billion in 2001 to $42 billion in 2015, and automobiles remain Korea’s second largest export. Over the same period, China became the world’s largest auto market: Total Chinese auto imports expanded from just $1.3 billion in 2001 to $44.2 billion in 2015. Korean brand Hyundai accounted for 5 percent of Chinese passenger auto sales in 2015, or 1 million cars out of 20 million.1 Korean auto exports to China, however, represent a small share of total Chinese imports at just $0.9 billion out of $44.2 billion (2 percent) in 2015. Autos represented only 1 percent of total Korean exports to China in 2015 (see figure)—by contrast, auto exports represent 25 percent of Korean exports to the United States. 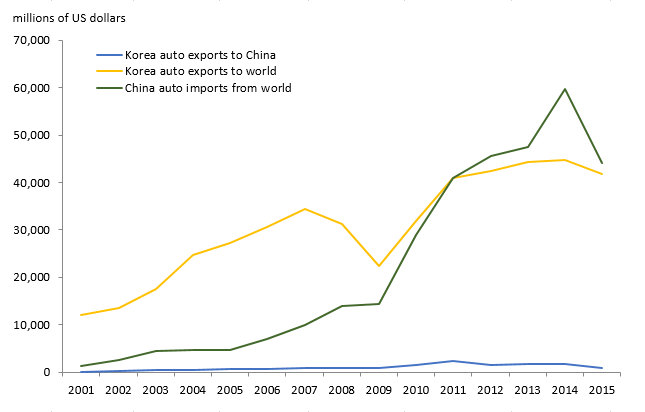 High Chinese tariffs on autos have propelled foreign direct investment (FDI), which is permitted if foreign companies form alliances or joint ventures with Chinese domestic companies. Within this policy framework, China prefers that Korean automobile manufacturers invest in assembly production in China rather than increase access through exports—China applies this tactic to other major foreign automakers as well. In part, this explains why autos represent a relatively small share of total Korean exports to China.

Korea hoped to use the Korea-China FTA to increase its share of the Chinese market, but by agreeing to exclude autos from tariff liberalization, it forces auto producers to invest more in China to increase market share. This result is markedly different from what was done in the Korea-US FTA, under which the United States and Korea agreed to remove their auto tariffs of 2.5 and 8 percent, respectively by January 2016. But given the importance of FDI and related nontariff barriers, provisions involving regulatory policies were more important than tariffs (Schott 2010). The lack of ambition in the Korea-China case missed a key opportunity for liberalization, but the way in which the pact addresses investment in follow up negotiations could be important.

For more analysis of the Korea-China FTA, see Schott, Jung, and Cimino-Isaacs (2015).

1. The figures for Hyundai auto sales in China include all Hyundai models that are domestically produced, but not those that are imported.

South Korea Is the New Front in Trump’s Trade Strategy

Will the KORUS FTA Have an Encore?