The New TAA Package Stands On Its Own Merits

A majority of Democrats in the House of Representatives did something not only self-defeating but harmful to their constituents earlier this month. On June 12, they joined with Republicans to reject a job-training program long cherished by Democrats and worker advocates, because its passage would facilitate approval of a separate measure giving President Obama “fast-track” authority to conclude the negotiations on the Trans-Pacific Partnership (TPP). Now some Democrats are having second thoughts about that already notorious vote.1 Congress has a chance to save the program—known as Trade Adjustment Assistance (TAA)—with a revote this week. Lawmakers would do well to recognize the benefits of TAA, especially in the substantial extension approved by the Senate earlier this month.

TAA is an important program for workers who lose their jobs when trade expands—as inevitably happens to some workers when competition increases and the economy adapts. At an aggregate level, expanded trade delivers benefits to America at least 10 times the cost to displaced workers, in terms of new jobs created, greater exports, and lower prices for US businesses and consumers. But since that overwhelming benefit to the country as a whole is of little consolation to those workers who do lose their jobs, there should be a political compact between labor and business interests to give displaced workers some share of the gains. So for the past 50 years, TAA in its various iterations has invested a small part of the substantial benefits that accrue to the US economy from international trade into programs that directly help affected workers retool and return to the labor force.

Two ironies surround the Machiavellian maneuvering in Congress that roped in TAA this month. First, the TAA measure before Congress is meaningfully more generous than the current iteration of the TAA package. Many Republican members of Congress rejected the new TAA measure because they have little sympathy for the policies that assist displaced workers. But the Republican leadership has accepted a good bill—one that would renew the program until June 30, 2021, longer than any of the renewals since 2002—as a necessity for bipartisan support for TPA. In addition, as we will detail, the benefits of TAA would accrue to states represented by many TAA-skeptics.

Whether TPP is eventually ratified or not, some American workers will continue to be displaced by expanding trade, either with TPP partners, India or China, or even other advanced economies. These workers deserve a helping hand to get on with their careers and lives; a small fraction of the huge overall benefits of trade to the US economy should be devoted to displaced workers to that end. Apart from current gamesmanship and even current trade deals, Congress needs to reauthorize TAA.

As discussed in a previous blog post, a critical change in the new TAA provisions is the expansion of two eligibility criteria: (1) to cover dislocated workers in service sectors (not just manufacturing), which is crucial since US trade expansion in the future will come largely through service sector liberalization; and (2) to cover dislocated workers affected by trade from non-FTA trading partners, such as India and China. The Department of Labor (DOL) estimates that these changes will enable an additional 24,000 to 30,000 workers per year to gain coverage under TAA. This improves the overall economic efficiency of the program as well by allowing it to apply to almost all affected workers, rather than simply those in older industries or competing with FTA partners—which distorts the economy and investment.

In addition to expanded eligibility terms, more generous coverage will be available for specific benefits and services to displaced workers. As an illustration, table 1 compares the selected benefits of 2011 provisions, which the 2015 extension would generally reinstate, versus the current, more restrictive 2014 provisions. Importantly, while training was covered under the 2014 law, case management and employment services were not. In fiscal year 2013, nearly 84 percent of all TAA participants made use of case management services (70,674 out of 84,520) (DOL 2013). The 2015 extension would reinstate additional funding for case management and employment services. Moreover, under the 2014 law, Trade Readjustment Allowance (TRA) was subject to a more restrictive eligibility criteria and funding level for worker training; the 2015 extension would upgrade these criteria. The annual cap of $220 million for reemployment services under the current TAA would increase to $450 million annually.

Impact of TAA by State

If TAA is allowed to expire, many workers would be left in the cold without training, wage support, or related services. How does the distribution of such workers look across the United States?

Since 2009, nearly 12,000 petitions have been filed for TAA, and of these about 70 percent were certified, covering about 780,000 certified workers (see Cimino and Hufbauer 2015, table 1). Certification ensures an essential safety net for those who need assistance. Of course not all workers who are certified claim benefits, because some of them find new jobs on their own.

By state, in FY2013 the largest number of certified workers was in California with 56,650 workers, followed by Michigan (48,707), Texas (46,521), Ohio (44,410), Pennsylvania (42,385), New York (35,940), North Carolina (30,843), and Illinois (26,365). Figure 1 gives further detail, state-by-state. DOL reports on TAA break these figures down further by congressional district on a fiscal year basis (for example, see table A-21 for FY2013). Interestingly, the seven states that contain the most certified TAA workers account for 177 House districts (currently 92 Republican and 85 Democrat), so if those members are presumed to vote based on those constituent interests, a large share of the votes needed to pass TAA in the House should come from those seven states. 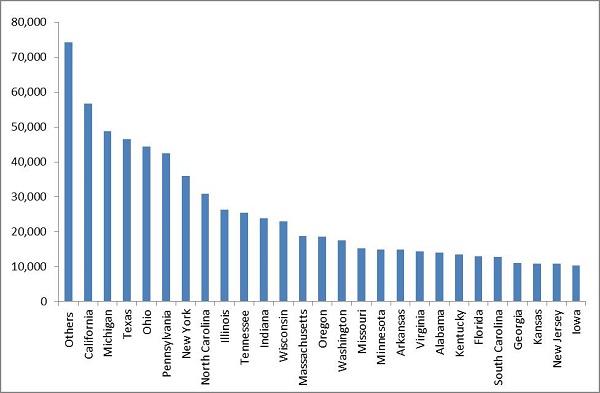 Note: "Others" indicates the cumulative total of 24 states, which have less than 10,000 certified workers each.
Source: Department of Labor.

The total amount of TAA program funds—that is, the amount allocated for training and other services under Section 239, but distinct from the total payments that include TRA and wage subsidies—was roughly $534 million total in FY2013 (table 2). Michigan, Texas, Pennsylvania, Ohio, North Carolina, and Wisconsin were among the top six fund recipients, receiving between $27 million and $52 million. Forty-two states received above $1 million in program funds, and 20 states received above $10 million.

In terms of program outcomes, in FY2014 more than 75 percent of TAA participants gained employment within six months of completing the program, and then 90 percent of those reemployed workers retained their jobs six months later. These figures are generally in line with previous years (see table 3). These metrics suggest favorable outcomes for TAA participants, that the program does what it says to the benefit of the workers and of local labor markets.

The 2015 extension would upgrade the current TAA package by reinstating the provisions of 2011 and by covering both services workers and those workers affected by trade with non-FTA partners. The tables and figure in this blog speak for themselves for the benefits of TAA even under prior limitations, which the bill on the table would loosen. TAA is a worthwhile program. Congress should renew TAA on its own considerable merits, as a benefit to American workers and communities, whether or not it makes further trade deals like TPP possible—though we support the long-standing compact that trade opening and adjustment assistance should expand hand-in-hand.

1. “That is the quintessential cutting off our noses to spite our face,” said Representative Steve Israel, a New York Democrat who is part of House Minority Leader Nancy Pelosi’s leadership team. “And it’s not cutting off our noses—it’s cutting off the noses of working people.” Deirdre Walsh and Jeremy Diamond, “House passes trade authority bill, Senate outcome unclear,” CNN, June 18, 2015 (accessed on June 19, 2015).

Will the TPP Create More Jobs for Americans? Why the Answer is “No”!

Free Trade in the Pacific: Wooing Back the United States