India's Growth Rate Has Probably Been Overestimated for Years

The promise of democracy is the periodic opportunity it creates for fresh beginnings. A government re-elected with such a resounding mandate should continue with the successful aspects of its economic policies. The most notable has been promoting economic inclusion via the public provision of essential private goods and services, including toilets, housing, power, cooking gas, bank accounts, emergency medical assistance, and now a basic income for all farmers.

But that mandate should also embolden change in other aspects, based on new evidence and fresh understanding. My new research suggests that post-global financial crisis, the heady narrative of a guns-blazing India—that statisticians led us to believe—may have to cede to a more realistic one of an economy growing solidly but not spectacularly.

My results indicate that methodological changes led to GDP growth being overstated by about 2.5 percentage points per year between 2011–12 and 2016–17, a period that spans both UPA and NDA governments. Official estimates place average annual growth for this period at about 7 percent. Actual growth may have been about 4.5 percent, with a 95 percent confidence interval of 3.5 to 5.5 percent.

A few important clarifications. Much of the recent commentary has portrayed these changes as political, since they were announced late in 2014 after the NDA-2 government came into power, and because there have been other, more recent GDP controversies, such as the back-casting exercise, and puzzling upward revisions for the most recent years. But the methodological changes, which did not originate from the politicians, must be distinguished from these recent controversies. The substantive work was done by technocrats, and largely under the UPA-2 government.

Moreover, the effort was desirable, both to expand the data for GDP estimation and to move to a methodology more suited for a technologically advancing, dynamic economy. The non-politicized nature of the changes can be seen from the fact that the new estimates bumped up growth for 2013–14, the last year of the UPA-2 government.

Figure 1 shows, for each indicator, the correlation between its annual growth and GDP growth, for 2001–11 on the horizontal axis and 2012–17 on the vertical-axis. The results are striking. 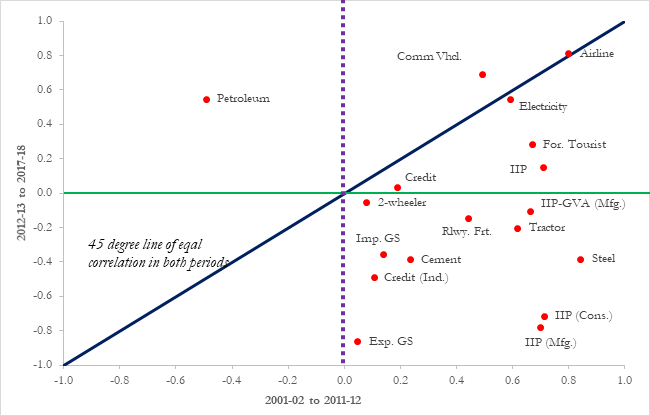 Second, I compare India with other countries. For a sample of 71 high and middle income countries, I estimate a relationship between a set of indicators and GDP growth for the pre and post-2011 periods. The indicators chosen (credit, exports, imports and electricity) are simple, reliable, and typically not produced by the agency that estimates GDP. This relationship is captured by the upward-sloping line in Figure 2. The line shows the growth predicted by the indicators (horizontal axis) and what is officially reported (vertical axis).

In the first period, the India data point (red) is bang on the line, indicating that it is a normal country: India’s reported GDP growth is consistent with the cross-country relationship. However, in the second period the India data point (blue) is well above the line, implying that its GDP growth is much greater than what would be predicted by the cross-country relationship—by over 2.5 percentage points per year. This shifting pattern across the two periods—India being normal in the first, but an outlier in the second—is a robust result, not depending on samples, indicators, or estimation procedures. 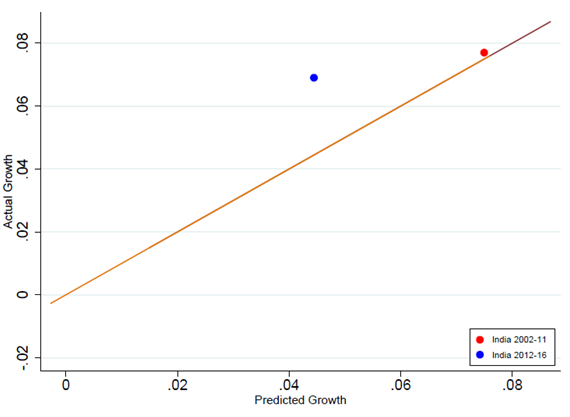 The horizontal axis shows growth predicted for different countries based on the cross-country relationship between the indicators and GDP growth; the vertical axis shows actual growth.

Reproducing the detailed methodology underlying the GDP estimates is impossible for outside researchers, so it is difficult to trace the source of the problem. But we can locate one sector where the mis-measurement seems particularly severe, namely formal manufacturing. Before 2011, formal manufacturing value added from the national income accounts moved closely with IIP (Mfg.) and with manufacturing exports. But afterward the correlations turn strongly and bizarrely negative.

Further research, building on this paper will surely uncover further insights. Accordingly, I will soon make the data and codes underlying this paper public for further analysis.

What are the implications of these findings? Growth estimates matter not just for reputational reasons but critically for internal policy-making. The new evidence implies that both monetary and fiscal policies over the last years were overly tight from a cyclical perspective. For example, interest rates may have been too high, by as much as 150 basis points. The Indian policy automobile has been navigated with a faulty, possibly broken, speedometer.

In addition, inaccurate statistics on the economy’s health dampen the impetus for reform. For example, had it been known that India’s GDP growth was actually 4.5 percent, the urgency to act on the banking system or on agricultural challenges may have been greater.

Most important, restoring growth must be the key policy objective. Policy discourse recently has focused on employment, agriculture and redistribution more broadly. The popular narrative has been one of “jobless growth”, hinting at a disconnect between fundamental dynamism and key outcomes. In reality, weak job growth and acute financial sector stress may have simply stemmed from modest GDP growth. Going forward, there must be reform urgency stemming from the new knowledge that growth has been tepid, not torrid; And from recognizing that growth of 4.5 percent will make the government’s laudable inclusion agenda difficult to sustain fiscally.

Another obvious implication is that GDP estimation in its entirety must be revisited by an independent task force, comprising both national and international experts, statisticians, macro-economists and policy users. Indeed, this revisiting may throw up exciting, new opportunities, such as using the large amounts of transactions-level GST data that is now being generated, to estimate—for the first time in India—expenditure-based estimates of GDP.

Finally, the question will arise as to my role on this issue while I was CEA. Throughout my tenure, my team and I grappled with conflicting economic data. We raised these doubts frequently within government, and publicly articulated these in a measured manner in government documents, especially the Economic Survey of July 2017. But the time and space afforded by being outside government were necessary to undertake months of very detailed research, including subjecting it to careful scrutiny and cross-checking by numerous colleagues, to generate robust evidence.

To this new evidence we must turn collectively and constructively.

China and India: Who Will Win the Growth Competition?