This article is based on the World Bank Working Paper number WPS 6810 "All in the Family: State Capture in Tunisia."

In the aftermath of the Tunisian revolution in 2011, some 550 properties, 48 boats and yachts, 40 stock portfolios, 367 bank accounts, and approximately 400 enterprises were seized from deposed President Zine el-Abidine Ben Ali and his clan. The Confiscation Commission in Tunisia estimates that the total value of these assets combined—the total worth of the Ben Ali clan's belongings—was approximately $13 billion or more than one-quarter of Tunisian GDP in 2010. 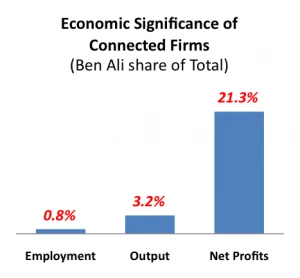 While they account for less than 1 percent of all wage jobs, firms with ownership connection to the Ben Ali family absorb more than one-fifth of net corporate profits in Tunisia (in 2010).

Using new data (available only after the revolution), we confirm what everyone in Tunisia suspected all along—that Ben Ali and his family robbed the country—and document how it happened. The scale of Ben Ali's capture of the country's wealth defies previous assumptions: By the end of 2010, some 220 firms owned by Ben Ali and his extended family were taking an astounding 21 percent of all private sector profits in Tunisia.

How did they manage to drive up the profits of their firms to such astronomical levels? They did so by taking advantage of and manipulating Tunisia's investment laws. Using firm data and merging it with data on regulations on domestic and foreign entry, we are able to demonstrate extensive use of such entry barriers to expand the family coffers.

Ben Ali's relatives flocked to sectors riddled with regulations; sectors such as telecoms, air and maritime transport, commerce and distribution, banking, real estate, and hotels and restaurants. Entry restrictions to these sectors translated in greater market share, higher prices, and more money for the firms of Ben Ali's extended family, who had privileged access. At the extreme, the rule in some sectors was Ben Ali or bust. For instance, there was the failed entry of McDonald's into Tunisia: After awarding the franchise to the "wrong" partner, entry was denied by the government and the franchise pulled its efforts to enter the Tunisian market altogether. 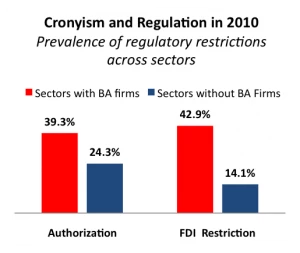 When existing regulations did not sufficiently shield the family businesses from competition, the president designed and decreed new regulations: Over a 16-year period Ben Ali signed 25 decrees introducing new authorization requirements in 45 different sectors and new restrictions to foreign investment in 28 sectors. Guess who disproportionately gained from these new regulations? Of course, Ben Ali's family firms.

Many countries effectively use entry restrictions to serve domestic interests, such as protecting consumers from poor quality goods and services or protecting growing domestic firms from unfair foreign competition. However in Tunisia such regulations did precisely the opposite—they served to protect the family's business interests, at the expense of the Tunisian consumers and firms who had to foot the bill.

Of concern, Tunisians today continue to pay the price for the discriminatory policies instituted by Ben Ali. The Ben Ali clan owned only a fraction of the firms operating in markets protected by barriers to entry, such that other firms operating under these regulations continue to benefit from these privileges. As an example, consumer prices for telecommunications services, a sector that was dominated by the Ben Ali clan, remain dramatically higher than those in neighboring countries. The price of incoming international calls to Tunisia is approximately 20 times the open market price, and outgoing international calls from Tunisia cost more than 10 times the open market price. Such steep prices benefit telecom companies at the expense of Tunisian consumers and firms.

Removing regulatory barriers that protect the elite few at the expense of the public is critical to accelerate job creation and bring greater prosperity to all Tunisians.

It would be a mistake to assume that cronyism is no longer an issue now that Ben Ali has departed and his assets (including his wife's shoe collection) are being auctioned off. The system of laws and regulations that allowed the family to capture such a large share of the country's wealth remains largely in place. Entry authorizations and restrictions to domestic and foreign investors remain the prevalent feature of the investment climate in Tunisia. Today, nearly 60 percent of Tunisia's economy is in sectors subject to authorizations and barriers to entry for domestic and foreign investors. These regulations continue to enable the capture of the country's wealth by a few privileged Tunisians at the expense of the majority, hampering investment and the creation of the well-paying jobs that Tunisians deserve.

Meanwhile, new entrepreneurs and unconnected firms struggle to compete, stymied under existing regulation. Perhaps more importantly, polls show that Tunisians see corruption to have increased since the revolution, with the private sector often considered to be the domain of those with connections to power. Legitimate businesses that should be the engines of growth and job creation in Tunisia remain trapped between a mistrustful public and a rigged system.

The risk today is that vested interests will continue to capture the opportunities for rent-seeking, prevent change, and aggravate social exclusion. Removing regulatory barriers that protect the elite few at the expense of the public is critical to accelerate job creation and bring greater prosperity to all Tunisians.

The Scramble for Bauxite: Beware of Chinese Promising Gifts