Standard & Poor's brutal downgrade of Brazil's sovereign credit rating on September 9 is testament to the country's untenable situation. Political gridlock and the lack of a coherent fiscal strategy were the basis for the downgrade from investment to speculative grade, accompanied by a negative outlook that clearly underscores lack of confidence over the government's ability to deliver on its fiscal consolidation promises made earlier this year. The straw on the camel's back was the government's irresponsible decision to send to Congress a budget proposal for 2016 that envisages a primary deficit of 0.5 percent of GDP—rather than the previously stipulated surplus target of 0.7 percent of GDP—without including any corrective measures. Brazil's Fiscal Responsibility Law requires that the budget be balanced from one year to the next, and that specific measures be taken if it is not. By failing to provide a strategy to balance the budget, the government signaled that medium-term fiscal consolidation was either no longer a priority, or had become an insurmountable task due to political gridlock. Neither position is acceptable.

It is also not acceptable that a fiscal adjustment that aims to correct a nominal deficit of 6 percent of GDP in the middle of a deep recession be mostly articulated around tax increases. Once President Dilma Rousseff balked publicly from introducing heavier expenditure cuts that would cut into social programs, Finance Minister Joaquim Levy was left with little choice but to flirt with the idea of reintroducing a heavily distortionary financial transactions tax (CPMF) or increasing income taxes, which are very regressive in Brazil. The following chart illustrates why this strategy lacks credibility (figure 1). 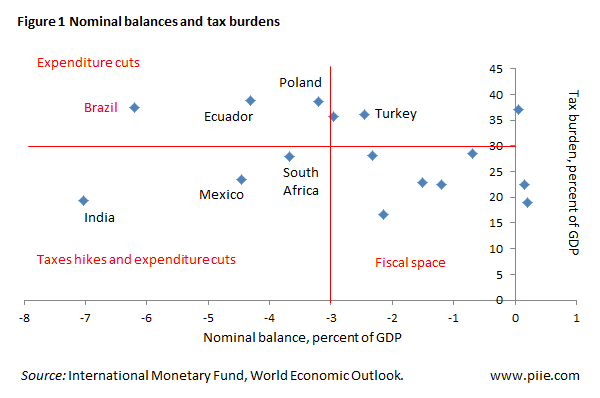 For a group of selected emerging markets, nominal balances as a percent of GDP are shown on the horizontal axis, while tax burdens are displayed on the vertical axis. The chart is divided into four quadrants, where the upper left quadrant encompasses countries with very high tax-to-GDP—Brazil being the outlier in this group. Countries in this quadrant already have such high tax burdens that they fall on the perverse side of the Laffer Curve: If they attempt to raise taxes, they will likely face falling tax revenues. Hence, fiscal adjustment has to be done mostly via expenditure cuts. Below a tax burden threshold of 30 percent of GDP are countries that may have large nominal deficits but that could achieve fiscal consolidation through some tax hikes. The quadrants to the right are those where fiscal problems are either a non-issue—countries that have very low deficits or even surpluses—or a problem that could be more easily resolved through modest measures. These are the countries that benefit from so-called fiscal space.

Brazil's downgrade was largely the result of a fiscal strategy that lacks any semblance of credibility. The president has now promised to reevaluate expenditure cuts. Brazil needs to take urgent action to convince other ratings agencies not to follow the S&P path.

"Agenda Brasil": Brazil's No Agenda Solution to the Crisis