China Chart of the Week: Inequality Continues A Steady Decline

Earlier this month China released its preliminary 2014 economic indicators including the latest reading on China’s gini coefficient as a measure of income inequality. It showed inequality has been on a steady decline now for six consecutive years. After reaching a peak of 0.49 in 2008 China’s gini coefficient is now only 0.47. However, before we get too excited, it is important to remember that even after this steady decline, China remains one of the most unequal countries. Today China’s gini coefficient is still closer to Nigeria than the United States and remains far from the OECD average or the exemplars of equity like Norway. Nonetheless the steady decline is a good sign that reforms such as the income inequality plan announced two years ago are having a positive impact. 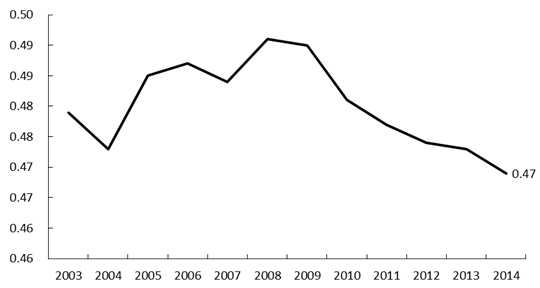 The Interconnected Economy: The Effects of Globalization on US Economic Disparity

Economic Policy for a Pandemic Age: How the World Must Prepare