This PIIE chart is the second in our series on international tax reform. Read also Some of the ways multinational companies reduce their tax bills and How an OECD tax proposal would reallocate international taxing rights more fairly.

In June, leaders of the Group of Seven (G7) countries adopted the goal of introducing a global minimum corporate tax rate of 15 percent. Support has grown since, with some 130 countries, including all Group of 20 (G20) governments, endorsing two proposals for international tax alignment developed by the Organization of Economic Cooperation and Development. While the proposals would eliminate the financial gains from some forms of profit shifting (including those outlined in earlier PIIE Charts), they do not address all of the ways multinational companies reduce their tax obligations.

One of the proposals establishes a global minimum corporate tax designed to prevent companies from shifting profits to low-tax countries to minimize their tax bills. Governments would still be free to set corporate tax rates at any level, but if subsidiary profits are taxed at a rate lower than 15 percent in a particular country, the government of the country where the company  is headquartered can apply a top-up tax to bring the tax rate applied to profits recorded in the low-tax jurisdiction up to the 15 percent minimum. 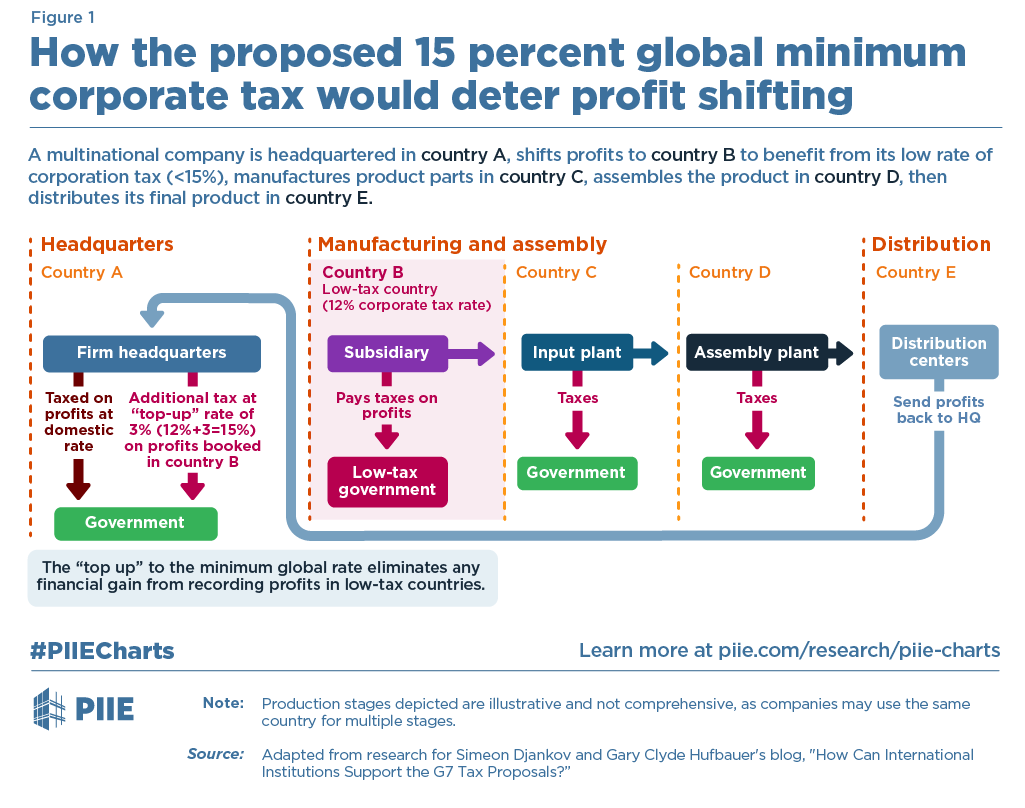 For example, if a firm has a subsidiary in a low-tax jurisdiction with a corporate tax rate of 12 percent, the government in the firm’s country of residence can apply a top-up tax on profits booked in that jurisdiction of 3 percent, bringing the taxes paid on those profits up to the 15 percent global minimum (figure 1).

The minimum tax rate would disincentivize profit shifting and help end the proliferation of tax havens. It would also end the practice of governments competing to create the lowest tax environment to attract multinational firms.

However, the proposals do not cover all the strategies multinational firms employ to reduce tax bills, and if the legislation is adopted, low-tax countries around the world could continue to lure multinational corporations to their shores with other tax perks. One such perk would be research and development (R&D) tax credits, which firms already take advantage of to mitigate their tax obligations (figure 2). 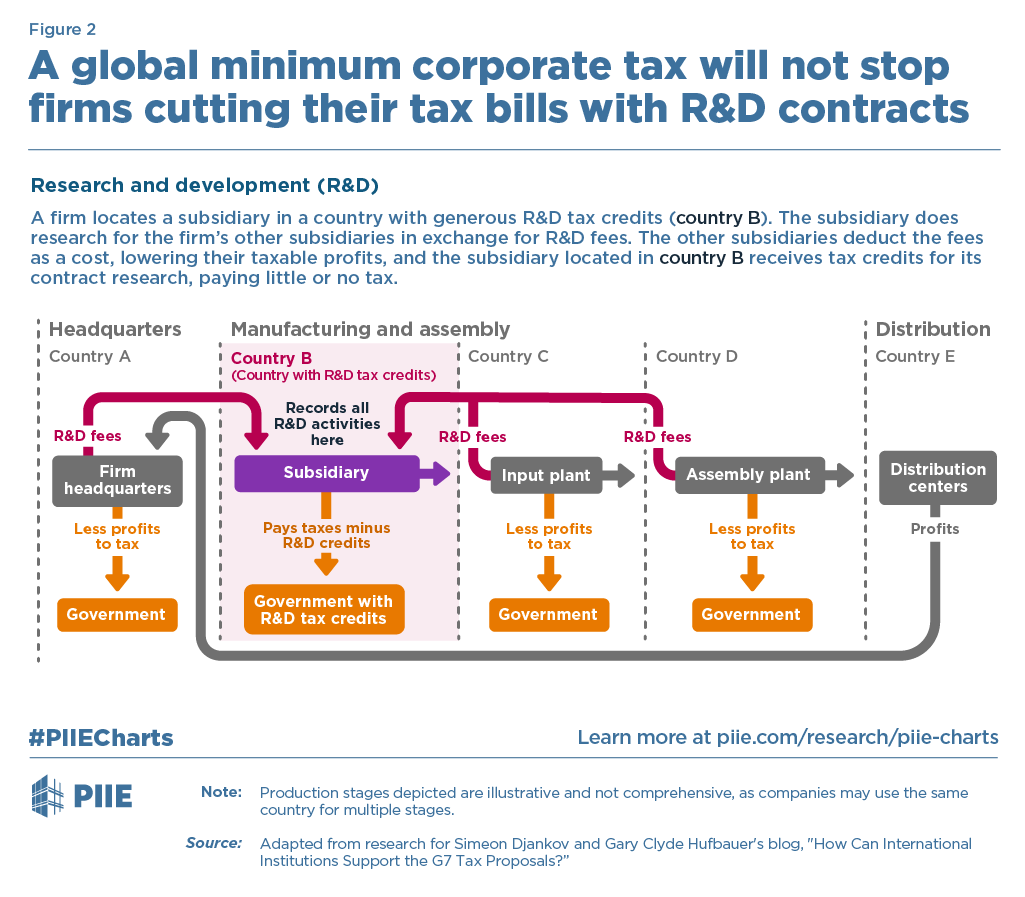 Strategically locating R&D activities allows firms to reduce their taxable profit in high-tax jurisdictions, while enjoying a financial windfall from tax credits. A firm establishes a subsidiary in a country with generous R&D tax credits; other subsidiaries then contract this subsidiary to carry out their R&D activities. The firm registers all R&D activities in the country with the highest R&D tax credits, regardless of where the research work actually takes place—maximizing its tax rebates. Simultaneously, the R&D fees paid by other subsidiaries are deducted as costs, lowering the taxable profit in other jurisdictions.

Without additional legislation, competition between governments to set the lowest corporate tax rate could be replaced by competition to grant the most lavish R&D tax credits, allowing multinational companies to continue to erode tax revenues and maximize profits.

This PIIE Chart was adapted as a supplement to Simeon Djankov and Gary Clyde Hufbauer’s blog How Can International Institutions Support the G7 Tax Proposals?

Sign up for the PIIE Educational Resources newsletter for a roundup of the latest content geared towards students and educators.