Germany's business environment has stalled and even deteriorated over the last year, according to the World Bank’s most recent Ease of Doing Business rankings. This may be a surprise to some given that Germany is viewed as one of the most attractive foreign direct investment destinations in Western Europe. Specific causes of the worsened environment include the Act on Modernization of Cost Rules, which increased the cost of starting a business in Germany, and an increase in the real estate transfer tax, which also made registering property more expensive. These changes made an already poor showing of these two indicators even worse: Germany's “starting a business” score fell from 103rd to 114th in the world, and its “registering property” score also fell from 80th to 89th in the world (see figure). Such low scores indicate that serious roadblocks still exist within the domestic economy in attracting private investment. Germany is currently facing a large investment gap, the majority of which needs to be accounted for by private investment. This shortfall cannot be alleviated by additional government spending alone because of the "debt brake" enshrined in Germany's Basic Law. Structural reforms that improve Germany's business climate would provide much-needed assistance in boosting private investment and maintaining the country’s long-term competitiveness. 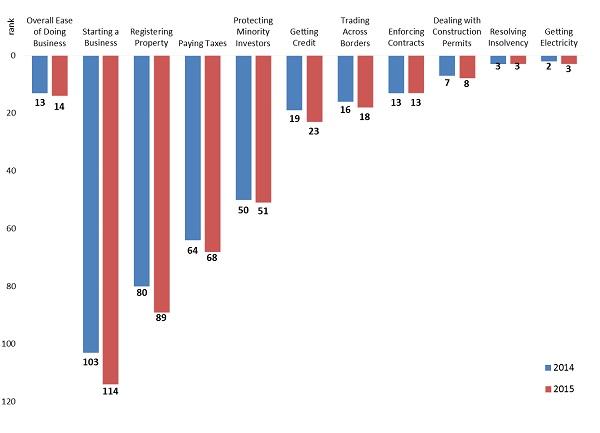 I am sorry that this does not fit to the just published report of EY (Ernest & Young) that Germany is one of the global top three destinations for foreign investment.

This raises the question who is measuring what and for what purpose. Is this all proganda?

It's is to my mind impossible that both statements are compatible with each other.

Thanks for the insightful comment. I wouldn't call EY's results propaganda, but it does have a different focus than the World Bank's EDB Index -- reputation among investors rather than business reforms undertaken each year. Even if it takes much longer to register property or more bureaucratic steps are required to start a new business compared to the rest of the Eurozone, Germany still has a well-deserved reputation among investors as an FDI destination. The lack of business-friendly reforms over the last year will hopefully not continue in the years ahead, because that could undermine future investments into Germany.

Who, Not What, Matters for Investment Barriers