Research shows that multinational corporations (MNCs) are more productive, pay higher wages, and have greater sales than purely domestic firms. But how do Japanese-owned firms rank among MNCs? This chart shows the average annual wages and benefits that domestic US firms, US MNCs, all foreign-owned MNCs, and Japanese-owned MNCs pay per US employee. MNCs of all types do pay higher wages than purely domestic firms, but US-based employees of foreign-owned multinationals also earn more than employees of US MNCs. Studies rarely look at the wages paid by foreign-owned firms operating in the United States, which are much higher than even the most productive of US-owned firms. Among the foreign MNCs, Japanese firms pay higher than average wages, making them exceptional contributors to the US domestic economy.

Average wages and benefits per worker paid by MNCs in the United States, 2012 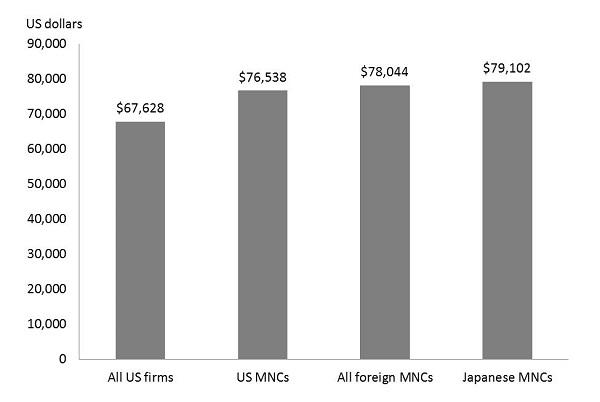 Sources: US Bureau of Economic Analysis and US Census Bureau.

The Cost of Trump’s Economic Nationalism: A Loss of Foreign Investment in the United States

The Beef over US Competitiveness