Services Trade Barriers in China and the US

With the summit between China’s President Xi and US President Obama coming up next week, there has been a lot of talk about the progress toward a US-China bilateral investment treaty.  The negotiators recently held their 21st meeting where they again exchanged negative lists. One of the biggest sticking points for the United States is the opening up of China’s service sector. One reason this is important is that the United States imports much more from China than it exports: In 2014, the bilateral US trade deficit in goods and services with China was $315 billion, out of a global trade deficit of $500 billion. This deficit could decrease if the United States was able to export and invest more in China’s service sector—indeed the US enjoys a trade surplus in services both with China and the world. This chart displays OECD indicators showing how restrictive the United States and China are to services trade. China has significantly higher restrictions (note a higher number indicates more restrictions) on many service imports, especially in important areas like banking, shipping, telecom, and insurance. Opening up services would not only significantly improve bilateral economic relations, but could also aid China’s rebalancing from an investment and export-oriented economy to one that increasingly relies on service sector growth and more consumption. 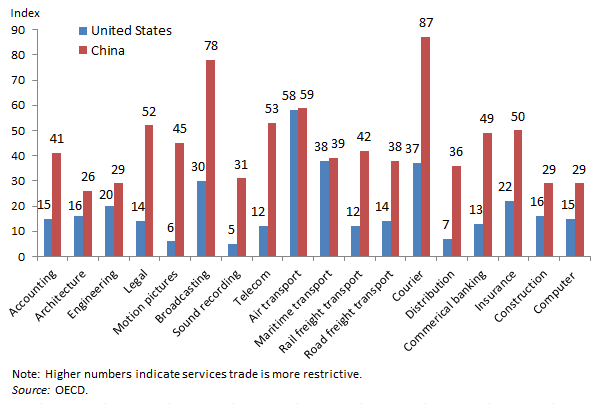 How to Increase Trade between China and the United States